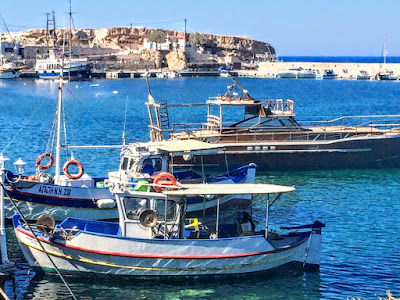 The port of Hersonissos in Crete … it shares the origins of its name with Kherson in Ukraine (Photograph: Patrick Comerford)

The news from Ukraine often includes reports from towns and cities with names such as Sevastopol, Simferopol, Mariupol, and Melitopol – names that seem familiar to me because they sound so like the names of towns and cities in Greece.

Like so many Greek place names, many of these Ukrainian cities feature the characteristic suffix -pol, derived from the Ancient Greek word πόλις (polis), or city.

In fact, the name Sevastopol also comes from the Greek word σεβαστός (sevastos), meaning venerable or august and commonly used as an honorific for royal leaders.

Simferopol in Greek, Συμφερούπολη, means ‘the city of common good.’ The name of the city Mariupol, which is home to a large Greek community, was originally Marianopol, from the name Maria and the word polis, meaning the City of the Virgin Mary.

Similarly, Melitopol stems from the name of the ancient port city nearby, once called Meliti (Μελίτη), which comes from μέλι (meli), or honey in Greek. Melitopol or ‘the city of honey’ may have been an irony in naming, for this is now a grim industrial city.

It is not surprising that when the ancient Greeks colonised much of the Mediterranean, they did not stop there. The land they controlled stretched up through the Black Sea and the Sea of Azov. A large area of the southern coast of present-day Ukraine, along with the Crimean Peninsula, was home to Greek cities.

The beautiful southern city of Odessa was named after an ancient Greek city called Odessos, and Kherson was named for another ancient city of Chersonesus.

Chersonesus, on the south-west part of the Crimean peninsula, was an ancient Greek colony founded about 2,500 years ago. Settlers from Heraclea Pontica in Bithynia established the colony, called Χερσόνησος (Chersonisos) in ancient Greek, in Crimea as far back as the 6th century BCE.

Yet Greek colonisation is only part of the reason why many Ukrainian cities have roots in the Greek language.

Many of these Greek place names only date from the 18th century, when the southern part of Ukraine and Crimea, which were formerly under Ottoman and Tatar rule, were signed over to Russia under the Treaty of Kutchuk-Kainardji in 1774. After Russia took control of these formerly Ottoman-controlled areas, they began to rename many cities in the region.

Many of the cities that now have Greek names once had very different ones under the Ottomans: Sevastopol was controlled by the Tatars and was called Aqyar, Simferopol was Aqmescit or ‘white mosque,’ and Odessa was Khadjibey.

The new leaders set out to change the image of these urban areas, starting out with their names. Both Russians and Greeks are linked by their Orthodox Christianity, and this boasted ‘duty’ to protect fellow Orthodox Christians provided Tsarist Russia with an excuse to interfere in the internal affairs of Turkey and south-east Europe. This seems to have contributed to more Greek-sounding names for cities in Ukraine.

The name Sevastopol was chosen to flatter Catherine the Great, who was Tsarina of Russia when Sevastopol was founded in 1783. The other goal was to make a connection with ancient Greece. Accentuating the presence of ancient Greeks along the Black Sea coast added a degree of validity to Russia’s territorial claim to the region.

Russia’s ruling elite had developed an affinity for all things Greek. The connection with ancient Greece lent an air of respectability, civilisation and venerability to the new raw power of Russia. Additionally, these Russians saw ancient Greece as the pinnacle of the arts and civilisation, and they looked to emulate the ancient society. They highlighted the region’s ancient Greek history and connect its modern present to the ideals of ancient Greece by renaming these cities.

The man behind most of this was Prince Grigori Potemkin, a successful general, admiral and statesman, as well as the lover of Catherine the Great. His reward was to be made governor of the vast new territory of New Russia. He built a virtual state within a state, holding court, founding cities, building castles and encouraging immigration from all over the Russian empire and from as far away as Germany.

The label ‘Potemkin Village’ comes from the notion that when Catherine the Great sailed down the Dneiper River to inspect her new realm, the Prince built the façades of villages each night and filled them with well-fed peasants, before moving them downstream the next night.

He wanted to fool the Tsarina into thinking his colonisation of the region was more successful than it really was. The source of the legend, however, is a hostile German writer, and many modern historians see it as an allegorical invention.

The memory of New Russia persists. Vladimir Putin referred to it in a message to the Russian people, hinting at his ideal of making a new Russia again.

Ukrainian Greeks are a Greek minority in Ukraine today. The majority of these Ukrainian Greeks live in Donetsk Oblast and are particularly concentrated around the city of Mariupol.

According to census figures in 2001, there were 91,548 ethnic Greeks in Ukraine, or 0.2% of the population. However, the actual percentage of those with Greek ancestry is likely to be much higher due to widespread intermarriage between ethnic Greeks and other Ukrainians who are Ukrainian Orthodox, particularly in east Ukraine.

Many people with Greek ancestry in these areas have few if any strong links with Greece or use of the Greek language and so are not classified as Greeks in official censuses. Part of the process is explained by assimilation forced in the past by Soviet governments, but there are small Greek populations in Odessa and other major cities.

Most Greeks in Ukraine belong to the larger Greek diaspora of Pontic Greeks, but there is also a small recent group of Greek expatriates and immigrants.

After the 13th century invasion of the steppes of southern Ukraine and Russia to the north by Cuman and Mongol-Tatar Golden Horde, Greeks remained only in the towns on the southern slopes of the Crimean Mountains. They became divided into two sub-groups: Tatar-speaking Urums and Rumaiic Pontic Greeks with Rumeíka Greek as their mother tongue.

The Crimean Principality of Theodoro gained independence from the Empire of Trebizond in the early 14th century and lasted until it was conquered by the Ottoman Empire in the 15th century. Most present-day Greeks in Ukraine are the descendants of Pontic Greeks from the Pontus region between the fall of the Empire of Trebizond in 1461 and the Russo-Turkish War of 1828-1829.

The Urums and Rumaiic Pontic Greeks lived among the Crimean Tatars until the Russian Empire conquered the Crimea in 1783.

In 1937–1938, the Pontic Greeks endured another deportation by the Soviet authorities. But more Greeks arrived in Ukraine later, as Greek Communist refugees from mainly Greek Macedonia and other parts of Northern Greece fled their homes during the 1946-1949 Greek Civil War and settled in the Soivet Union, Czechoslovakia and other states. Many of these late arrivals were also Pontic Greeks or Caucasus Greeks.

A classical mosaic at the port of Hersonissos in Crete … Russians tried to emulate classical Greek civilisation (Photograph: Patrick Comerford)