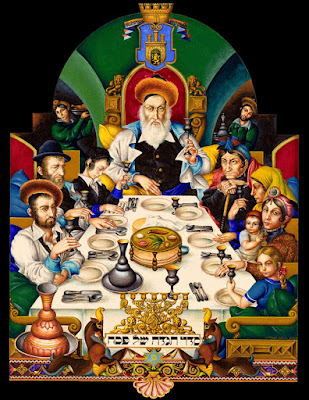 ‘Then would the waters have overwhelmed us and the torrent gone over our soul; over our soul would have swept the raging waters’ (Psalm 124: 4) … ‘Why is this night different from all other nights?’ … the Four Questions (Ma Nishtanah) in a page from Arthur Szyk’s ‘Haggadah’ (Łódź, 1935)

In the Calendar of the Church, we are in Ordinary Time. The Caleendar of the Church today commemorates Saint Cyril, Bishop of Alexandria and Teacher of the Faith. Before today begins, I am taking some time this morning to continue my reflections drawing on the Psalms.

Psalm 124 is the fifth in a series of 15 short psalms (Psalm 120-134) known as the ‘Songs of Ascents.’ These psalms begin with the Hebrew words שיר המעלות‎ (Shir Hama’a lot). In the slightly different numbering system in the Greek Septuagint and the Latin Vulgate, this is counted as Psalm 123. It is sometimes known by its Latin opening words, Ad te levavi oculos meos.

Psalm 124 is a short psalm of eight verses, and is sometimes known by its opening words in Latin, Nisi quia Dominus. In the slightly different numbering in the Greek Septuagint and the Latin Vulgate, this is Psalm 123.

This is a psalm of thanksgiving, using – as so often in the Psalms – a rapid succession of different images, recalling the Exodus and the escape from slavery in Egypt.

The people have been in danger of being swallowed up or swept away, as in a flood, a prey to the enemy’s teeth, captured in a hunter’s trap.

The images do not coalesce into one single metaphor. Rather, they combine to express a mood – in this case, the sense of sudden release from danger.

I often wonder how, during the horrors of the Holocaust, suffering Jews could possibly have sung the words of Psalm 124:

Yet they maintained the hope and the expectation that God can and would act through political decision-making to protect the rights of the vulnerable, the abused and the violated. For, as the Psalmist says, and as we – and all children – should be able to sing:

‘Our help is in the name of the Lord, who made heaven and earth’ (Psalm 124: 8) … sunset on the River Deel and the Shannon Estuary at Askeaton, Co Limerick (Photograph: Patrick Comerford)

6 Blessed be the Lord,
who has not given us
as prey to their teeth.
7 We have escaped like a bird
from the snare of the fowlers;
the snare is broken,
and we have escaped.

8 Our help is in the name of the Lord,
who made heaven and earth.

The theme this week in the prayer diary of the Anglican mission agency USPG (United Society Partners in the Gospel) is ‘Ethics and Leadership.’ It was introduced yesterday by Andy Flannagan, Executive Director of Christians in Politics.

Let us give thanks for the work of Christians in Politics. May we encourage our fellow Christians to get involved in the decision making process.