‘Archangel Michael The Protector’ by Emily Young at Saint Pancras Church … today is the Feast of Saint Michael and All Angels (Photograph: Patrick Comerford, 2022)

Today is the Feast of Saint Michael and All Angels. During my visit to London a few days ago for a day’s events organised by the Anglican mission agency USPG (United Society Partners in the Gospel) to see Emily Young’s sculpture, ‘Archangel Michael The Protector,’ in the gardens of Saint Pancras Church, Euston Road.

Like many people, I never cease to be fascinated by the Caryatids that make Saint Pancras a unique and captivating church. But I wondered last weekend how people miss the opportunity to appreciate Emily Young’s ‘Archangel Michael The Protector’ in the church gardens

‘Archangel Michael The Protector’ is in onyx and can be viewed in the church grounds from Upper Woburn Place, around the corner from Euston Road.

An inscription on a plaque between the sculpture and the railings reads: ‘In memory of the victims of the 7th July 2005 bombings and all victims of violence. ‘I will lift up my eyes unto the hills’ Psalm 121.’

Nothing moves in this image, a silent reminder of what is being commemorated in the sculpture. Because Saint Michael’s face has only one eye, and this is closed, some critics have wondered whether the quotation is ill-chosen. But the full context is provided in Psalm 121: 1-2:

1 I lift up my eyes to the hills—
from where will my help come?
2 My help comes from the Lord,
who made heaven and earth.

The 7 July 2005 London bombings, often referred to as 7/7, were a series of four co-ordinated suicide attacks that targeted commuters on the public transport system in the morning rush hour.

Three homemade bombs packed into backpacks were detonated in quick succession on Underground trains on the Circle line near Aldgate and at Edgware Road, and on the Piccadilly line near Russell Square; later, a fourth bomb went off on a bus in Tavistock Square, near Upper Woburn Place and Saint Pancras Church.

Apart from the four bombers, 52 people of 18 different nationalities were killed and more than 700 were injured in the attacks. It was Britain’s deadliest terrorist incident since the 1988 bombing of Pan Am Flight 103 near Lockerbie, and the first Islamist suicide attack in the UK. 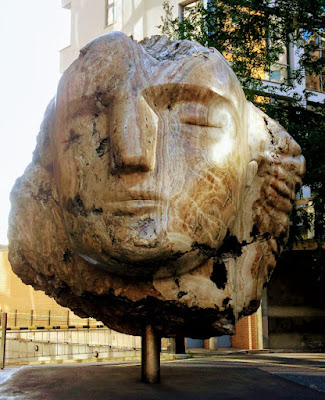 Emily Young has been described as ‘Britain’s foremost female stone sculptor’ and ‘Britain’s greatest living stone sculptor.’ Some years ago, as I was making my way back from the USPG offices in Southwark, I stopped and took time at an open-air exhibition at ENO Southbank of works by Emily Young.

A number of her works were forming a sculpture trail or garden at the NEO Bankside development on South Bank in ‘Emily Young: Sculptor Trail.’ The exhibition was both a continuation and a broadening of her presence on the South Bank, echoing three large-scale works on long-loan facing the Tate Modern from NEO Bankside.

Emily Young’s works are instantly recognisable and accessible. She deals in spectacular lumps of stone – quartzite, onyx, marble, alabaster – to which she gives an identity by carving a face but leaving the remainder of the rock displayed in its raw, craggy intensity, as if the face had grown or evolved organically. The Financial Times says: ‘Her sculptures meditate on time, nature, memory, man’s relationship to the Earth.’

Emily Young was born in London in 1951 into a family of writers, artists and politicians. Her grandmother, the sculptor Kathleen Scott (1878-1947), was a colleague of Auguste Rodin, and the widow of the Polar explorer, Captain Robert Falcon Scott, known as Scott of the Antarctic. Her works included a statue of Edward Smith, the captain of the Titanic, now in Beacon Park, Lichfield. She later married Emily Young’s paternal grandfather, the politician and writer Edward Hilton Young, 1st Lord Kennet.

She was still a student when she achieved fame (or notoriety) in 1971 as the inspiration for the Pink Floyd song See Emily Play written by Syd Barrett of Pink Floyd. But the song has earlier origins in the 1960s. She was 15 when she met Syd Barrett at the London Free School in 1965. ‘I used to go there because there were a lot of Beat philosophers and poets around,’ she said many years later. ‘There were fundraising concerts with The Pink Floyd Sound, as they were then called. I was more keen on poets than rockers. I was educating myself. I was a seeker. I wanted to meet everyone and take every drug.’

As a young woman, Emily Young worked primarily as a painter, while she was studying at Chelsea School of Art in 1968 and later at Central Saint Martins. She travelled around the world in the late 1960s and 1970s, spending time in the US, Afghanistan, Pakistan, India, France, Italy, Africa, South America, the Middle East and China, encountering a variety of cultures and developing her experiences of art.

In the early 1980s, she abandoned painting and turned to carving, sourcing stone from all around the world. Travelling from a London childhood, to a European education, to a life lived as an artist round the world, she began to interact with the timeless quality of stone to produce breath-taking sculptures of luminous intensity and great beauty.

As well as marble, she carves in semi-precious stone – agate, alabaster, lapis lazuli. These not only reflect and refract the light – but glow with a passionate intensity (as Winged Golden Onyx Head), revealing the hidden crystalline structure of the material and the subtle layers the time has laid down, showing the liquid qualities of hard rock.

The primary objective of her sculpture is to bring the natural beauty and energy of stone to the fore. Her sculptures have unique characters because each stone has an individual geological history and geographical source. Her approach allows the viewer to comprehend a deep grounding across time, land and cultures. She combines traditional carving skills with technology to produce work that is both contemporary and ancient, with a unique, serious and poetic presence.

She told an interviewer: ‘I carve in stone the fierce need in millions of us to retrieve some semblance of dignity for the human race in its place on Earth. We can show ourselves to posterity as a primitive and brutal life form – that what we are best at is rapacity, greed, and wilful ignorance, and we can also show that we are creatures of great love for our whole planet, that everyone of us is a worshipper in her temple of life.’

She recently explained: ‘So my work is a kind of temple activity now, devotional; when I work a piece of stone, the mineral occlusions of the past are revealed, the layers of sediment unpeeled; I may open in one knock something that took millions of years to form: dusts settling, water dripping, forces pushing, minerals growing – material and geological revelations: the story of time on Earth shows here, sometimes startling, always beautiful.’

Emily Young now divides her time between studios in London and Italy. Her permanent installations and public collections can be seen in many places, including Saint Paul’s Churchyard, Saint Pancras Church, NEO Bankside, and the Imperial War Museum in London; La Defense, Paris; Salisbury Cathedral, Wiltshire; the Whitworth Art Gallery, Manchester; and the Cloister of Madonna Dell’Orto, Venice.

Because Emily Young’s ‘Archangel Michael The Protector’ recalls the victims of 7/7 bombings ‘and all victims of violence,’ it seems appropriate to return to the Collect of this day which I used in my prayers and reflections this morning:

Everlasting God,
you have ordained and constituted
the ministries of angels and mortals in a wonderful order:
grant that as your holy angels always serve you in heaven,
so, at your command,
they may help and defend us on earth;
through Jesus Christ your Son our Lord,
who is alive and reigns with you,
in the unity of the Holy Spirit,
one God, now and for ever.