Why the Titanic is being remembered far from the sea 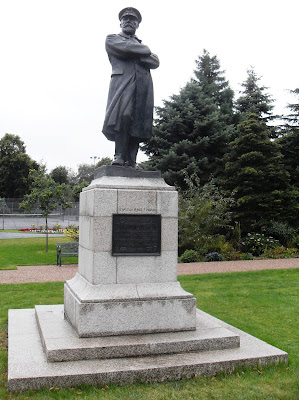 Commander Edward Smith’s statue in Beacon Park, Lichfield … as far from the sea as you can get in England (Photograph: Patrick Comerford)

The 100th anniversary of the sinking of the Titanic tonight (14/15 April 2012) is being marked in Belfast, Cobh, Southampton and across the world in a blaze of publicity. But, why of all places, is this anniversary being marked with a spectacular range of commemorations in Lichfield – a cathedral city that is as far from the sea as you can get in England?

The events include a “First Class Dinner and Dance on board the Titanic” last night [Friday] at Swinfen Hall Hotel. This promised to be an evening of “luxury and opulence,” with a five-course meal, and the sounds of the Edwardian era, the chink of fine china and crystal, delicious food and sparkling conversation with the captain, and a chance to win official Titanic cutlery, kindly donated by Arthur Price Ltd, as part of a charity raffle.

Earlier, on Tuesday afternoon [10 April], the story of a controversial statue of the captain of the Titanic in heart of Lichfield was told in a costumed drama in the Lichfield Heritage Centre, and the story of the fatal night, through the eyes of Lady Lucy Duff-Gordon, was told by the History Wardrobe Company on Thursday evening in Lichfield Library.

But why all this fuss?

Mary Hutchinson, of the Lichfield Titanic Commemoration Group, points out that “Lichfield is the proud home of a statue of Captain Smith.”

The statue of Commander Edward stands in the Museum Gardens in Beacon Park, Lichfield. Commander Smith was from Hanley near Stoke-on-Trent in north-west Staffordshire, about as far away in Staffordshire from Lichfield s one can imagine. But when his widow commissioned a memorial statue for him two years after the sinking of the Titanic, it is said that Stoke-on-Trent and no other town was willing to accept it.

The statue stands as far from the sea as it can be. Local lore says it ended up in Lichfield after being shunned by the outraged people of the Potteries, although Joyce Berry of the Lichfield Heritage Centre told the Birmingham Post last week that Lichfield was picked because it was a major coaching route between London and Liverpool – and a good place for American tourists to pay their respects to the man who went down with his ship. Others say the statue ended up in Lichfield because it was the centre of the Diocese of Lichfield.

The bronze statue, which originally cost £740, was sculpted by Lady Kathleen Scott, widow of Scott of the Antarctic. It was unveiled on 25 July 1914 by Smith’s daughter, Helen Melville Smith, and the speakers at the ceremony included the Waterford-born admiral Lord Charles Beresford and the Duchess of Sutherland. Two weeks later, World War I broke out.

The presence of the statue in Lichfield has sometimes been the subject of controversy. Even before it was unveiled, the Lichfield Mercury reported on 19 June 1914 that a local clergyman had initiated a petition signed by over 70 people against its erection.

The 2.4 metre (8ft) statue, which stands on a 2.1 metre (7 ft) plinth of Cornish granite, was commissioned by friends of the captain after his death. The statue shows him in a defiant pose, with the words “Be British” carved underneath. Some anecdotes say these were the last words he said before he perished. The full inscription reads:

“Capt. of RMS Titanic
Commander
Edward Smith RD, RNR,
Born January 27 1850, died April 15 1912,
bequeathing to his countrymen
the memory & example of a great heart
a brave life and a heroic death
~ Be British.”

It was restored at a cost of £16,000 by Lichfield District Council and Lichfield City Council in 2010 as part of the Lichfield City Historic Parks project. There was an unsuccessful campaign last year to have the statue moved back to Commander Smith’s home town of Hanley.

The statue will be illuminated from dusk this evening and tomorrow evening, with more than 1,500 flickering tea lights – one for each person who died – placed around the base of the statue. A distress flare will be released in Beacon Park this evening [Saturday], signifying the flares set off from the Titanic on the fateful night of 14 April 1912, and a commemorative service will also be held at the statue at 2 p.m. tomorrow afternoon [Sunday 15 April].

The service will feature music from the era, poetry readings, wreath laying and prayers for all who died in the disaster and others who have lost their lives at sea. At the end of the service, eight bells will be sounded at Lichfield Cathedral to signify the end of a watch at sea.

The Titanic commemorations in Lichfield come to a close next Saturday [21 April] with a Titanic Choral Evensong at 5.30 p.m. in Lichfield Cathedral, with prayers for all seafarers and in memory of all who have lost their lives at sea.
Posted by Patrick Comerford at 10:00