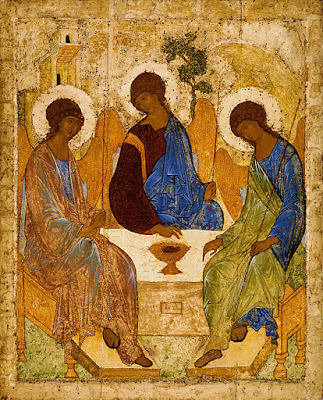 Andrei Rublev’s icon of the Visitation of Abraham, also known as the Old Testament Trinity

This morning [1 March 2004] we are looking at Byzantine theology and schisms, icons and spirituality.

Earlier this morning, we discussed, we look at Byzantine theology and Church life; the Councils of the Church; schisms and heresies; iconoclasm; and the intrigues in the Patriarchates.

Now, we are looking at Icons and Byzantine spirituality.

In popular culture, movies such as Captain Corelli’s Mandolin or My Big Fat Greek Wedding have shown many people the difference in the Christian heritages of the west and those churches that have a Byzantine heritage. How did you react to the reliquary of Aghios Gerasimos being brought out to heal the demented in Captain Corelli’s Mandolin? Or to the actual wedding scene itself in My Big Fat Greek Wedding?

An understanding of the spiritual heritage of the Byzantine world is needed for some aspects of popular culture, and for understanding the religious mindset of many of our new immigrants in Ireland today, as well as helping you to understand what is happening to you when you visit churches during your holidays on a Greek island or in Cyprus.

It is often forgotten, that Orthodoxy is so much part of the current cultural, economic and political climate in Europe.

1, The Orthodox Churches of the four ancient Patriarchates, Constantinople, Alexandria, Antioch and Jerusalem. We traditionally call these churches Greek Orthodox.

2, The Greek Orthodox Churches of Greece and Cyprus.

4,The rapidly growing Orthodox churches of East Africa, East Asia and other places, where Byzantine culture is inter-mingling with a variety of ethnic cultural identities.

5, The churches of the diaspora, including the Greek, Romanian and Russian churches in this island.

The gifts Orthodoxy has been offering us in recent decades:

In recent decades Orthodoxy has given the churches in the west a number of insights into worship, liturgy, spirituality, theology, ecclesiology (understanding the nature of the Church), and a sense of our church history: where we are coming from, what we are doing today, and where we are going to.

Worship and liturgy
The word Orthodoxy not only describes a large section of Christianity, it also means ‘right worship,’ or ‘right praise.’ The beauty of Orthodox liturgy is, to Orthodox, a sign that their theology is right, and that their faith is right. We have learned so much from eastern liturgy, and Orthodoxy has informed so much liturgical reform in the 20th century.

Their fasts longer and stricter, they celebrate name days and ignore birthdays, and, more importantly, Easter, not Christmas, is the pre-eminent Christian festival in every community.

Their priests may marry before ordination, but not after, and bishops are chosen from among the ranks of celibate monks, although they may be widowed men, who join a monastery.

Monasticism is a gift of the Byzantine Church to the western church. The first monks were in the Egyptian Desert, when Alexandria and Egypt were still part of the Byzantine world, and the monastic tradition has been handed down as an important part of Christian literature in the Sayings of the Desert Fathers.

Today, the Byzantine monastic tradition is most culturally energetic on Mount Athos, where there are over twenty monasteries and sketes on a peninsula in northern Greece that is autonomous and that may only be visited by men, and may only be visited by non-Orthodox men who have a particular interest in Orthodoxy and Byzantine culture. There, Byzantine culture and Orthodox spirituality are woven together in a seamless garment. But it is also possible to visit Orthodox monasteries throughout the Greek islands and in Cyprus to find women’s convents.

Monks and nuns in the Byzantine world, and in the Orthodox world to this day, belong to a monastery or convent, and not to a monastic order, such as the Benedictines. After joining, they remain members of their monastery for the rest of their lives, even if their work takes them somewhere else. [Metropolitan] Kallistos Ware lives in Oxford, and is a bishop in England, but remains a monk of Patmos. All monks on Mount Athos automatically become Greek citizens.

Particular examples are: the Jesus Prayer, Iconography, and writings such as the Philokalia.

The words of the Jesus Prayer are simple: ‘Lord Jesus Christ, Son of God, have mercy on me.’

The Philokalia is an anthology of ascetical and mystical texts, from the 4th to the 15th centuries. It was edited by two Greek monks, now regarded as saints, and was intended for both laity and clergy. It was eventually published in Venice in 1782, and it made the Jesus Prayer popular once again. It has since been translated and published in four volumes in English, reintroducing many aspects of Orthodox spirituality to the West.

In Orthodoxy, we also find a Patristic tradition of concern for the poor and the oppressed, expressed by Saint John Chrysostom. Saint John the Almsgiver, Patriarch of Alexandria (died 619) spoke of ‘my brothers and sisters, the poor.’ He used to say ‘that if, without ill-will, someone were to strip the rich right down to their shirts in order to give to the poor, he would do no wrong.’

‘Those whom you call poor and beggars, these I proclaim my masters and helpers. For they, and they alone, can really help us and bestow upon us the Kingdom of Heaven.’

Icons are familiar to the Irish experience. Some examples include:

The Redemptorists and the Icon of Our Mary Lady of Perpetual Succour, popular in many Irish kitchens and living rooms because of the nation-wide Redemptorist missions;

The Glenstal Book of Icons;

The icons at Bellinter (Sisters of Our Lady of Sion);

Irish icon writers including a nun in Tallow, Co Waterford, and a staff member of the Bon Secours Hospital in Glasnevin.

But from Orthodox experience, many may already be familiar with:

Rublev’s icon, the Visitation of Abraham;

the image of Christ the Pantocrator in the dome of Orthodox churches.
Rethym
How do the Orthodox use icons?

Pray through the icon rather than to an icon.

They are not painted; an icon is written; like a book, it is there to teach and to enlighten, entering into it is not worshipping it.

Icons and frescoes in church are not to distract but to tell the salvific story, with the climax in the Dome, Christ the Pantocrator, the one through whom all things are made.

[Tell the Story of Andreas Theodorakis of Rethymnon in Crete, an icon painter trained on Stavronikita, who was hurt when I wanted to buy one of his icons.]

The earliest icons were believed to have been written or painted at the time of Christ, the most famous examples being the many icons of the Virgin Mary said to have been painted by the Evangelist Luke.

However, scholars are still debating when Byzantine Christians began to use and venerate icons, which mostly took the form of holy figures painted on wooden panels.

Some argue that the practice began in the late sixth century, a time when the population as a whole began to sense the breakdown of the civilised Roman world and a need to turn to God. Others suggest that the veneration of icons began later and that holy relics were still viewed in the late sixth and early seventh centuries as the main channels of divine power.

In any case, the veneration of icons was developing in the seventh century, and at the time was drawing criticism from Byzantium’s non-Christian neighbours, especially Muslims and Jews.

The word icon (εἰκών, eikon in Greek) simply means ‘image.’ In other words, a representation in any medium of the artist’s vision of reality. In its restricted sense, the word came to be used for a religious image that plays a unique role in the Orthodox Church, in its worship, and in its doctrine.

In strict theological terms, these are not objects of devotion in themselves, but windows into the divine realm. They are kissed and venerated at the beginning and at various points during the liturgy and other services. But it is incorrect to venerate an icon when the holy elements are being carried in or consecrated, for example.

After the iconclast controversy was settled, icons played a more-and-more central role in the spiritual life of the church in the Byzantine world. Some churches and monasteries in Byzantium possessed special icons for special occasions, sometimes carrying them in public processions through the streets of Constantinople. And when the city was sacked in 1204 by the Fourth Crusade, many of these precious icons were looted and taken to the West, especially to Venice, but also to Rome, Genoa and other cities.

Today, icons are one of the most noticeable gifts in spirituality that all our churches have received as part of our heritage from Byzantium and from the Byzantine world. So, let us spend some time looking at some prints of icons.

Next week (8 March 2004): The other Byzantiums and the end of history:

9, The other Byzantiums: Alexandria, Jerusalem, Damascus: the world of Dalrymple in the past and today.