The Benson Home Communion Set, passed through a long line of clergy for almost a century and a half (Photograph: Patrick Comerford)

After my walk on the beach in Balbriggan and along the pier on Sunday afternoon, I strolled through the town and up to Saint George’s Church and churchyard in Church Street. 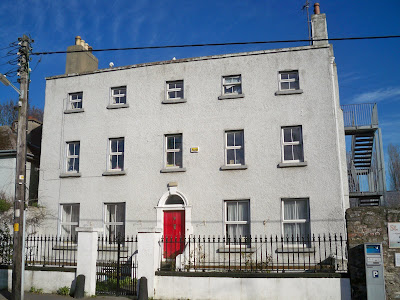 Bedford House ... home of the Revd Dr Charles Benson while he was Rector of Balbriggan (Photograph: Patrick Comerford, 2010)

Almost immediately across the street from this charming church is the imposing facade of Saint Anthony’s Nursing Home, which was known as Bedford House, and which – 100 years ago – was the home of the Revd Dr Charles William Benson while he was Rector of Balbriggan from 1903 until his death in Bedford House on 6 February 1919.

And there lies an interesting connection. For, when I was ordained priest, my good friend Canon Norman Ruddock presented me with a Home Communion set which had first belonged to the good Dr Beson.

Norrie was the Rector of Wexford from 1993 until his retirement in 2004. But we had been friends for over 30 years, since he came to the Diocese of Ferns in 1973 as the Rector of Killane and Killegney. I was then living in High Street, Wexford, around the corner from Saint Iberius’s Church, and he was the first rector to invite me to speak in his parish, and one of the first to suggest I should consider ordination in the Church of Ireland.

When I was ordained priest, he presented me with that home communion set – a small and obviously long-treasured chalice and patten. With it was a hand-written list of all the priests who owned the set and who – over the generations – passed it on to those they saw as their successors in the ministry and heirs to their vision, with my name at the very end.

The Revd Dr Charles Benson, founder and headmaster of Rathmines School, and the first owner of the home communion set

This set was first owned by the Revd Dr Charles William Benson (1836-1919), a pioneering figure in education in the late 19th century who was responsible for nurturing and encouraging the vocation of many leading bishops, priests and missionaries in the Church of Ireland.

Benson was born on 12 July 1836, the eldest son of Dr John Benson of Castlecomer, Co Kilkenny. He spent his boyhood days in Waterford, where he went to the Diocesan Endowed School. After Trinity College Dublin, Benson taught briefly at the Excelsior Institution, a school run by the Revd Charles Fleury in 89 Lower Leeson Street, Dublin – a house now part of the Catholic University School.

In 1858, when he was still only 21, Benson opened his own school at 48 Lower Rathmines Road, and he remained there as headmaster for over 40 years until 1899. Two years after opening Rathmines School, Benson was ordained deacon in 1860 on behalf of the ailing and feeble Archbishop Whately by Bishop Knox of Down. However, he had to wait another 10 years before he was ordained priest by Archbishop Trench in 1870, seven years after Whately’s death.

The register of Benson’s school reads like a potted social history of the Church of Ireland middle class in late Victorian Rathmines and Rathgar, with an interesting collection of pupils from other parts of Dublin and further afield. When the school opened its doors in 1858, the first boy to enrol was the future eminent eye surgeon, Sir Henry Swanzy.

Bishop John Curtis, an old boy of Rathmines and a missionary bishop in China

In all, 2,190 boys attended Rathmines School. They included great sportsmen who were distinguished at tennis, cricket, rugby, hockey and soccer. The great missionaries from Rathmines School included four who worked in China with what is now the Dublin University Far Eastern Mission: John Curtis, a missionary bishop who was also an Irish international soccer player, William P.W. Williams, who became Principal of Trinity College Fuzhou, founded 100 years ago in 1907, Samuel Synge, a missionary doctor-priest, and Thomas de Clare Studdert.

Among the missionaries who went to South Africa there were two especially colourful old boys: George Dundas Carleton entered Rathmines in 1886. Later he joined the Society of the Sacred Mission, one of the leading Anglican religious orders, and from 1915 to 1923 he worked in South Africa, where he became Archdeacon of Mooderport. He became entangled in a bitter dispute with his society in Kelham and left the order, but continued to work in England with the Society for the Propagation of the Gospel (SPG) and the Anglo-Catholic Congress. His schoolfriend, James Robinson Fowler, who enrolled in Rathmines the same year, also joined the Kelham Fathers, was professed with the name Alexander Nevski, and worked as a missionary in South Africa until his death in Cape Town in 1952.

Other famous pupils included the artist Walter Osborne; the writer and painter George Russell, better known as “AE”; the church historian Henry Patton, who was editor of the Church of Ireland Gazette before becoming Archdeacon and then Bishop of Killaloe; Henry Swanzy, who gave his name to Mount Swanzy, Canada; Newport White, Regius Professor of Divinity at TCD; Charles Osborne, biographer of the Portsmouth slum priest, Father Dolling; and George Tyrrell, who became a Roman Catholic in 1879, went on to become a distinguished Jesuit, but fell fowl of the Vatican for his “modernist” theology.

Benson’s staff included John Henry Bernard, a science teacher who became Dean of Saint Patrick’s, Dublin, Bishop of Ossory, Ferns and Leighlin, Archbishop of Dublin, and Provost of TCD; James Campbell, a classics teacher who became Lord Chancellor of Ireland and chairman of the first Senate in the Irish Free State, and was better known as Lord Glenavy; and, briefly, John Baptist Crozier, later Archbishop of Armagh.

‘On my mind and heart’

Benson later recalled the “memorable names” among his pupils who left impressions “on my mind and heart,” including Newport White, Carleton, Osborne and Tyrrell. His pupils included at least 12 future bishops, including missionary bishops in New Zealand and China, two bishops of Killaloe – Charles Dowse (whose father was Dean of Ferns), and Henry Patton – and three successive bishops of Tuam, including John Harden, who was Headmaster of Kilkenny College and of The King’s Hospital, Dublin, before becoming Bishop of Tuam.

While he was headmaster of Rathmines, Benson recalled, he preached in over 160 churches, and he served as curate in six or seven parishes. He was ordained deacon as curate to the Revd Dr William de Burgh, the first incumbent of Saint John’s, Sandymount, built as part of the Anglo-Catholic revival.

Benson then worked at Saint Audeon’s in Dublin’s city centre, and in Sandford Parish, Ranelagh, where he lived. He was ordained priest in 1870 as curate in Sandford to William Pakenham Walsh, a former Dublin secretary of the Church Mission Society and a future Bishop of Ossory, Ferns and Leighlin. He worked briefly in Newtownmountkennedy, Co Wicklow, with Henry Irwin, father of both “Father Pat” Irwin, a pioneering missionary in British Columbia, and of Edmund Irwin, a missionary in Southern Africa for eleven years before returning to Dublin as one of Benson’s successors as curate in Sandymount.

Later, Benson was curate in Saint Bride’s in the city centre, with the controversial ritualist William Carroll from Bannow, Co Wexford. He was back at Sandford once again in 1873.

Elm Park in Ranelagh, home to the Benson family and Rathmines boarders

In 1885, Benson was appointed to Saint Thomas’s, Mulhuddart, Co Dublin, but he continued to run Rathmines School, making the 11-mile journey to Mulhuddart every Sunday and on the occasional weekday from his home at Elm Park in Ranelagh, which was also home to the boarders at Rathmines School.

The last intake of students at Rathmines School included the Revd Robert Richard Neill, grandfather of Archbishop John Neill of Dublin, and the Revd Evelyn Charles Hodges, Rector of Rathmines, Principal of the Church of Ireland Training College in Kildare Place, and Bishop of Limerick, Ardfert and Aghadoe. 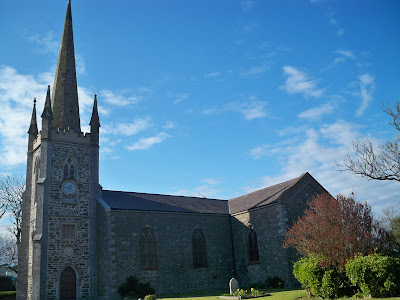 Saint George’s Church, Balbriggan ... Charles Benson was Rector from 1903 until his death in 1919 (Photograph: Patrick Comerford, 2010)

Shortly after Benson’s wife died in 1899, he decided to close his school, despite its success and fame. Four years later, in 1903, at the age of 67, he became Rector of Saint George’s, Balbriggan, Co Dublin. Although Benson abandoned his plans to write a book entitled Forty Years a Schoolmaster, a paper he read in 1912, at the age of 76, to the Louth Clerical Union provides many insights into the story of Rathmines School. He was still the Rector of Balbriggan when he died at the age of 82 in 1919 in Bedford House, Church Street, now a private nursing home.

His former pupils erected a memorial to Benson in the south aisle in Saint Patrick’s Cathedral, Dublin. It describes Rathmines as “one of the largest and most successful private schools in Ireland during the XIXth century.” And, in a tribute to Benson, they said: “Few teachers have been more stimulating and inspiring than this servant of God, who taught and acted on his motto, Ora et Labora.”

Benson’s home communion set was inherited by his son, Canon William Fitzgerald Benson. The younger Benson entered his father’s school in 1886, alongside Archdeacon Carleton and Father Alexander Nevski Fowler. He was an assistant master at Rathmines School for three years until it closed. He then worked as an organist in Saint Audeon’s, where his father had briefly been curate, before being ordained in England. He returned to Ireland in 1905 as curate of Tramore, Co Waterford, and after a brief period as an army chaplain, he served as curate-in-charge of Offerlane, Co Laois, now part of Mountrath Union in the Diocese of Ossory; curate of Kilnamanagh, Co Wexford, and Rector of Templeshanbo, Co Wexford, both in the Diocese of Ferns; and finally Rector of Castletown (Killabban) and Mayo, on the borders of Laois and Carlow. He became a canon of both Leighlin and Ossory in 1944, and was Chancellor of Leighlin when he retired to live in Dublin in 1954.

Canon Benson gave the home communion set to his only son, also Canon William Fitzgerald Benson. Bill Benson graduated from TCD in 1935, but it was not until 1953 that he was ordained for Maryborough (Portlaoise) in the Diocese of Ossory. In 1956, he became Rector of Clonegal, Co Carlow, in the Diocese of Ferns, now united with Bunclody.

From Bill Benson, the communion set passed to Noel Willoughby, who was Rector of Delgany and Glenageary and Archdeacon of Dublin before becoming Bishop of Cashel and Ossory. He died in Wexford in 2005 and is buried at Saint Canice’s Cathedral, Kilkenny. Noel Willoughby passed on the chalice and patten to his close friend, Canon Norman Ruddock.

Three of the six holders of the Home Communion Set at the 1798 commemorations in Wexford, from left: Norman Ruddock, Patrick Comerford and Bishop Noel Willoughby

At the end of the list of owners of this treasured home communion set, Norman Ruddock added my name and penned these words: “When using this cup and chalice, I hope you will be reminded of the Communion of Saints, over which time and distance have no meaning.”

At the end of his book, The Rambling Rector, he wrote: “As I come to the end … I’m thinking of a host of saints who have enriched my life … I’ve suddenly realised that Spring, Summer and Autumn have passed and that I’ve reached the Winter of content. ‘The best is yet to be’.” Norrie died in Wexford on 6 November 2006, and was buried in Killurin Churchyard on the banks of the Slaney. He too has taken his place among the Communion of Saints.

Canon Patrick Comerford is Director of Spiritual Formation at the Church of Ireland Theological Institute and a Canon of Christ Church Cathedral, Dublin. This feature was published in April 2010 in the ‘Church Review’ (Dublin and Glendalough) and the ‘Diocesan Magazine’ (Cashel and Ossory)

Posted by Patrick Comerford at 22:15

Hello Patrick, You might be interested in looking at these photographs of Rathmines School students I wrote about recently:
http://jacolette.wordpress.com/2012/01/16/young-dublin-cricketers-1860s-cartes-by-lauder-brothers/

Do you know if the school had a uniform? Kind regards, Orla.