Walking the beaches and harbours of Skerries and Balbriggan 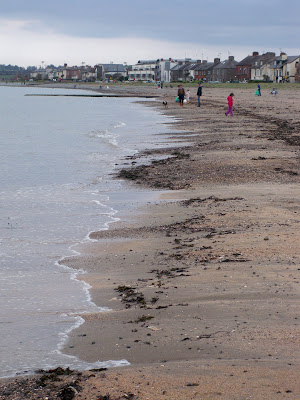 Cleaning up on the beach in Skerries this afternoon (Photograph; Patrick Comerford, 2010)

It was a long working weekend. The students on the NSM course, leading to Non-Stipendiary Ministry, and on the part-time MTh course, were in for the weekend, and Sunday morning was a real joy, preaching at the Sung Eucharist.

The water was clear and clean and a few sailing boats and trawlers could be seen out on the sea. But the main activity was on the beach, where scores of people had volunteered for the beach cleaning afternoon.

This was an inspired initiative, sponsored by the Skerries News but with whole-hearted support from the community. Families – adults and children – took part enthusiastically, not only on the sandy beaches, but on the rocks, up around Red Island, in the Harbour, and north on the shore out towards Balbriggan.

Around the rocks on Red Island, the water was so clean and clear, seals were bobbing up and down in the water, a few teenagers were daring to put their lower limbs into the sea water. 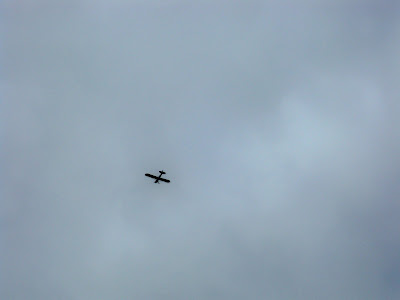 A low-flying plane over Red Island in Skerries ... the only plane in Irish airspace this afternoon (Photograph: Patrick Comerford, 2010)

And as the clouds began to break up and the sky began to turn to blue, I wondered was I only person in my circle who managed to catch a plane in Dublin this weekend?

Not that I caught I flight … but I managed to catch a photograph of a low-flying plane hovering over Red Island. I wondered was this one of the few planes that managed to take to the air in northern Europe this weekend.

Out on the rocks, a heron was safely browsing and searching in the clear sea water. Back on the pier in the harbour, the same heron flew overhead, and landed on one of the trawlers that was there for the weekend. Within seconds, a second heron had joined the harbour fleet, waiting for food and fish. 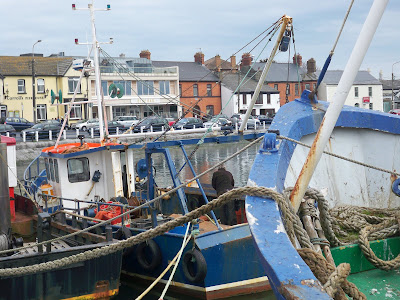 The trawlers in Skerries Harbour this afternoon were a reminder of this morning’s Gospel reading (Photograph: Patrick Comerford, 2010)

As a I looked at the trawlers – out in the safe, calm waters or ties up in the harbour – I thought once again of this morning’s Gospel reading and how the disciples caught nothing in their nets until they listened to Christ, and then caught more than they could have ever imagined. 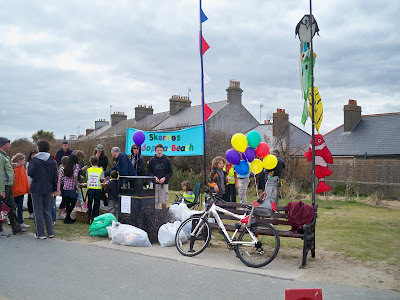 Cleaning up the beaches of Skerries brought out a strong community feeling this afternoon (Photograph: Patrick Comerford 2010)

I returned to the beach, where it was a surprise and a real delight to meet Facebook friends Emily and David Diebold. They have been the main movers and shakers behind the Skerries News for some years. Because of the clear vision of people like Emily and David, the beaches in Skerries and the waters around it are clear and clean … and because of them, there is a strong sense of community in Skerries too.

After picking up the Sunday papers in Gerry’s, I dropped into my favourite café in Skerries, the Olive, for the best espresso in Ireland and a small snack. And then it was on to Balbriggan. I went to school close by in Gormanston. But I haven’t stopped in Balbriggan for a few years ... not since I preached in Saint George’s Church a few years ago. 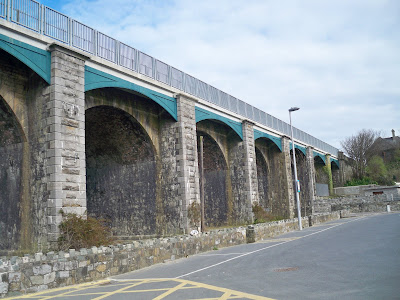 John Macneill described the Balbriggan viaduct as the single most important piece of work on the Dublin-Drogheda railway line (Photograph: Patrick Comerford, 2010)

This afternoon as I stood before it I was stunned by the majesty and beauty of the Balbriggan Viaduct, which was built in 1844. Sir John Macneill, who designed this marvellous work of engineering, described the viaduct as the single most important piece of work on the Dublin-Drogheda railway line. It has 11 bridges, and needed special permission from the British Admiralty for its construction because it involved considerable land reclamation: at the time, the water in the harbour at Balbriggan went back as far as the junction of High Street and Quay Street.

Macneill made such an impact on Irish life at the time that he was knighted on the platform of Amiens Street Station by the Viceroy, Earl de Grey, on 24 May 1844, prior to the departure of the first Dublin to Drogheda train. 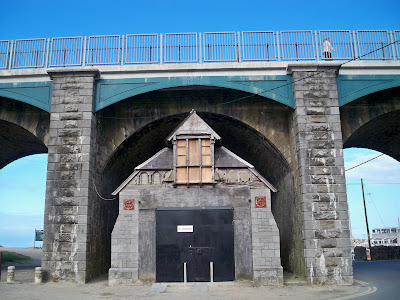 The Victorian lifeboat station beneath the railway viaduct in Balbriggan (Photograph: Patrick Comerford, 2010)

Underneath the viaduct, the Victorian lifeboat station, with its half-hipped roof, is an impressive building despite abject neglect. Surely it must have great potential. 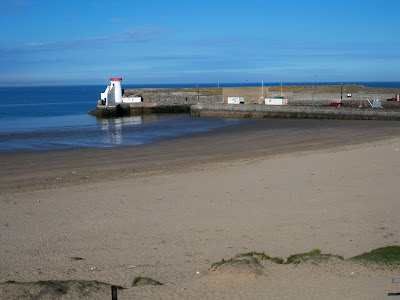 I walked onto the beach, and had my second beach walk of the day. And then I found myself walking the two piers of Balbriggan Harbour. 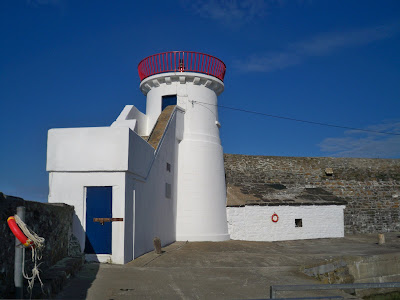 The Georgian lighthouse at the end of the pier in Balbriggan (Photograph: Patrick Comerford, 2010)

The harbour dates back to 1763, when a new pier was built by the local landlord, George Hamilton of Hampton Hall, known locally as Baron Hamilton. The second pier forming an inner harbour was built between 1826 and 1829, with some of the costs being funded by the Marquess of Lansdowne and by Hamilton’s son, the Revd George Hamilton, who was the proprietor of the village and keeper of lighthouse– an interesting pursuit for a priest of the Church of Ireland.

A lighthouse like this in Chania or Rethymnon in Crete would be a tourist attraction. On islands like Zakytnhos or Kephallonia it would be a boutique hotel or a restaurant. Why is a charming feature like this, with a captivating legacy, left without function or attention? 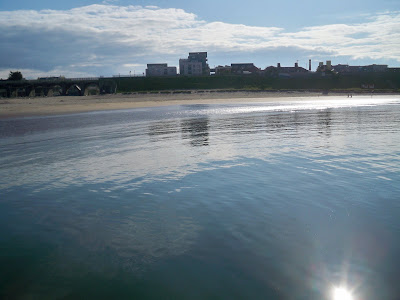 Looking back at the beach in Balbriggan from the lighthouse at the end of the pier (Photograph: Patrick Comerford, 2010)

After walking across the viaduct – an experience I had never expected – and walking along the pebbly shore to the south of the harbour, I climbed up the hill to Saint George’s Square, and turned back into Church Street to visit Saint George’s, the Church of Ireland parish church in Balbriggan, which dates from 1813, when the Revd George Hamilton – the lighthouse keeper – granted land to build a church and provided funds to pay for a curate. 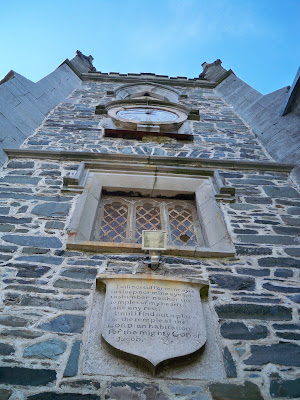 The tower, and a curious inscription above the door of Saint George’s Church, Balbriggan (Photograph: Patrick Comerford, 2010)

When the church building was completed in 1816 it was described as “a handsome edifice with a square embattled tower.” However, the church accidentally burned down in 1835, and another new church was built in the 1830s. 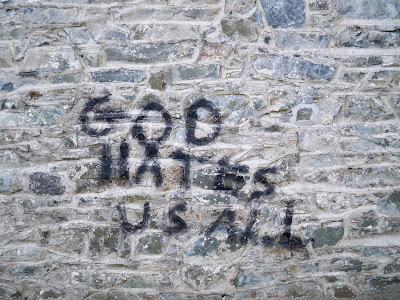 As I walked around Saint George’s and the churchyard, the Enterprise express between Belfast and Dublin raced past. The grass had been cut, and the church looked loved and cared for. But it was sad to see some of the window panes in the church were broken, there was graffiti on the frame of the church door and on the east wall of the church. Beside the sealed-up entrance to the Hamilton vault, one slogan declares: “God hates us all.” The debris in the churchyard included a discarded fire extinguisher.

A church like this in the heart of a town like this must have a message to the teenagers who were hanging around on the railway line beside it, in the street in front of it, and in the park beside it.

Posted by Patrick Comerford at 23:26