Searching for Pugin in Waterford and south Wexford

Arriving at Arthurstown on the ferry from Passage East (Photograph: Patrick Comerford, 2011)

I’m back on the Pugin trail. I’ve spent the past two days finding, photographing and cataloguing some more Pugin churches in Waterford and throughout Co Wexford.

Two of us set off from Dublin before noon on Friday, and we were crossing the bridge into Waterford City within an hour and a half.

Waterford is a difficult city to drive through, but after one or two wrong turns, we parked in Mayor’s Walk and were given directions at the Garda Station to the Pugin Chapel in the former Presentation Covent at Waterford Health Park on Slievekeale Road, directly opposite Walsh Park, the home Waterford hurling.

The building dates back to 1841, when the site was leased by Thomas Wyse to Francis Meagher, the first Catholic Mayor of Waterford, for a convent building, and work began in 1842. 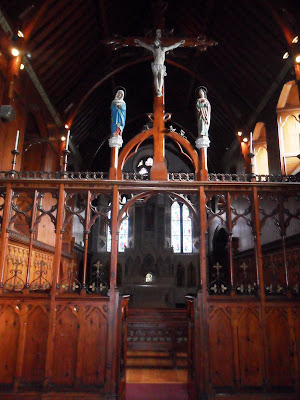 The rood screen in the former Presentation Convent Chapel in Waterford ... a typical feature of Pugin’s work (Photograph: Patrick Comerford, 2011)

Augustus Welby Northmore Pugin was engaged to design the building and Pugin was present in person when the foundation stone was laid on 10 June 1842. The main contractor was Richard Pierce, the Wexford architect Pugin employed for most of his work in Ireland.

However, it took over two decades to complete Pugin’s chapel, and when it was consecrated by Bishop Dominic O’Brien in 1863, it was more than ten years since both Pugin and Pierce had died.

In 1866, the chapel was further enhanced by the addition of splendid new stained glass windows that were unveiled on 21 April.

The Presentation Sisters remained for over a century. When they vacated Saint Mary’s school in the 1960s, extensive alterations are carried out, obscuring Pugin’s structure, and extensive changes were made to the stone gable.

Eventually, the Presentation Order sold the building in 2006, and within three years Dr Mark Rowe, Ms Edel Rowe and Dr Ita Creavin lovingly and carefully refurbished and extended the former convent. A substantial portion of the works to the new medical centre involved the restoration and repair of Pugin’s structure and presenting it to public view.

In the recent restoration and transformation, the building’s existing features were conserved, and additional space was created by adding new wings using the latest in sustainable technologies to create a healthy and eco-friendly building taking advantage of solar energy and reusing captured rainwater.

The chapel is used for art therapy but its integrity as a Pugin-designed church has been carefully conserved. Although no longer used as a place of worship, this may be the best-preserved Pugin church or chapel in Ireland today.

There is an air of well-being and wholeness in Waterford Health Park, with a warm welcome at the reception desk and in the café. As we walked through the former cloisters and corridors I felt the present use of the building must be close to the spiritual values of the original architects, Pugin and Pierce, and to those of Wyse, Meagher and the first Presentation Sisters who hoped that this would be a place of holiness and healing.

We failed to find the original Wyse manor house, which Pugin is said to have worked on too. Leaving our hopes of photographing that to another day, we headed off to Passage East, and took the ferry across the estuary of the River Suir to Ballyhack in south Co Wexford. 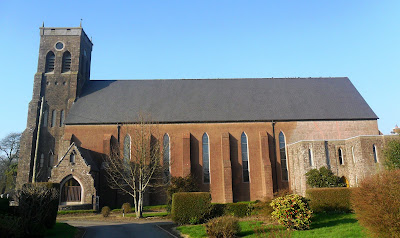 From Ballyhack we drove through Arthurstown to Ramsgrange to see Saint James’s Church, perhaps Pugin’s least-known church. Many architectural historians question whether Pugin truly was the architect of this church: some say he could not possibly have designed it; others say the designs had been procured from Pugin by his Irish patron, John Hyacinth Talbot and are based on Pugin’s church in Bree, outside Enniscorthy; others still say it was copied without his permission from his plans for Saint Peter’s College Chapel in Wexford.

This large church, designed in a 13th-century idiom, originally consists of a rectangular plan with a nave and chancel in one space with no separate external articulation of the chancel. In these details it is like several contemporary but much smaller churches by Pugin, including two churches I visited in the English Midlands last summer – Saint Mary’s, Uttoxeter, and Saint Augustine’s, Solihull, both also designed in 1838.

The nave was six bays long and the chancel was one bay in length, that bay being longer than the nave ones. There was a central west steeple, at least one side porch, and a large sacristy against the chancel north wall.

Each nave bay was lit by a tall lancet window and the chancel east wall had a trinity of lancets. The tower also had narrow lancet lights and the belfry stage openings had what was in effect a two-light plate tracery configuration comprising lancets surmounted by an oculus. There were statue niches to the tower west face and the porches.

Internally, the church had an open timber roof to the nave and a ribbed wood and plaster ceiling to the chancel, its profile following that of the curved arch braces of the nave trusses.

It is most probable that the design included a broach spire surmounting the tower, but this was never built.

Pugin wrote in 1841: “A tower to be complete should be terminated by a spire: every tower during the finest periods of pointed architecture either was, or was intended, to be so finished; a spire is in fact an ornamental covering to a tower; a flat roof is contrary to every principle of the style, and it was not till the decline of the art that they were adopted. The vertical principle, emblematic of the resurrection, is a leading characteristic of Christian architecture, and this is nowhere so conspicuous or striking as in the majestic spires of the middle ages. 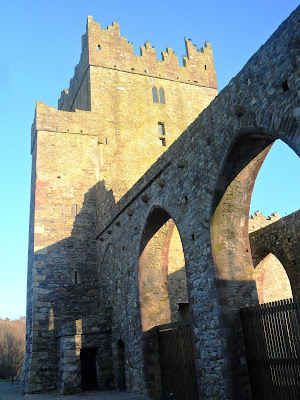 From Ramsgrange, we then continued on down through the Hook Peninsula to Tintern Abbey, which is said to have inspired Pugin’s design for the battlemented tower of Saint Michael’s Church in Gorey.

The abbey was built around 1200 by William Marshal, Earl of Pembroke, who vowed that if his ship survived a threatened shipwreck, he would build a church wherever they landed. He granted over 9,000 acres to the Cistercian monks of Tintern Abbey in Monmouthshire.

Tintern Abbey, on the shore of Bannow Bay, was once the third wealthiest monastic foundation in Ireland, and at the dissolution of the monasteries it was granted to Anthony Colclough from Staffordshire in 1543. The Colclough family converted the church and abbey into a private house and continued to live here until the 1960s.

Members of the family included John Henry Colclough (1769-1798), a leading member of the United Irishmen. He was executed on Wexford Bridge with Beauchamp Bagenal Harvey, and they are both buried in Saint Patrick’s Churchyard at the end of High Street in Wexford. The monastic remains include the nave, chancel, tower, chapel and cloister, and the Office of Public Works (OPW) is continuing to carry out restoration work. 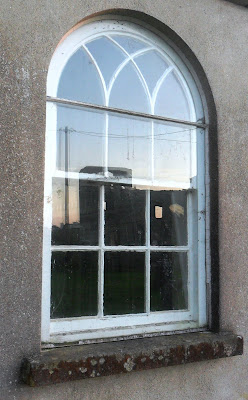 We then drove back to Fethard-on-Sea, scene of the Fethard-on-Sea boycott in the 1950s, but also the location of Fethard Castle, briefly the property of the Archbishops of Canterbury in the early 13th century but for most of its life an episcopal manor of the Bishops of Ferns.

Beside the castle is Saint Mogue’s, a pretty little Church of Ireland parish church. In the churchyard are the graves Bishop Alexander Devereux, the last Abbot of Dunbrody and Reformation Bishop of Ferns, along with some members of the Comerford family of Dungulph and Fethard.

Sunset on the sandy beach at Baginbun Bay, with the Martello Tower on the headland above (Photograph: Patrick Comerford, 2011)

From Fethard, we drove on to pretty Baginbun Bay for walk on the beach. Its tiny peaceful cove and beach belie the reality that this was once a place of military strategic importance, from the time Roger Le Gros landed with an Anglo-Norman force in 1170, to the building of prominent Martello Tower on the headland above the bay during the Napoleonic Wars 200 years ago.

It had been a bright sunny day, and the evening lights were beginning to fade. We headed on into Wexford Town, around the Boker and Bride Street Church, up School Street and John Street, and out through Newtown to the Ferrycarrig Hotel for dinner in Reeds, a stunning riverfront restaurant.

This is one of the most inspiring locations of any hotel in Ireland, and I awoke this morning to sweeping views across the River Slaney. But more tomorrow about this, some more delightful architectural gems in “Pugin-land,” at Bellevue and Edermine on the banks of the Slaney, and an afternoon visit to Bunclody.

Posted by Patrick Comerford at 22:14