Searching for Pugin on the banks of the Slaney

Early morning on the Slaney … looking from the Ferrycarrig Hotel across to Park (Photograph: Patrick Comerford, 2011)

I awoke on Saturday morning [6 March 2011] to the most breath-taking scene I have ever been greeted with from any hotel room.

I was staying in Liam Griffin’s Ferrycarrig Hotel after visiting the Pugin chapel in the former Presentation Convent in Waterford, and Saint James’s Church in Ramsgrange, an early Pugin church in south Co Wexford.

The Ferrycarrig Hotel is built on the north banks of the Slaney just below the bridge at Ferrycarrig, with sweeping views across the river as it opens out into an estuary-like lake of water, before narrowing again at Wexford to enter the sea at Wexford Harbour.

The hotel has 102 bedrooms, each with a stunning waterfront view. This has long been a strategic location. Nearby, Ferrycarrig Castle is one of the earliest Norman castles built in Ireland, and the first Norman stronghold in Ireland. The castle was built by Robert FitzStephen in 1169 to guard the ferry and river passage. Excavations indicate extensive occupation during the 13th century, although the present 15th century square tower house was probably built by the Roche family.

I awoke as the dark was beginning to fall away to the sound of early songbirds and the flapping of the cormorants on the edge of the water. As the mist slowly cleared and the morning gently dawned, the fields and houses at Park, on the south side of the river, were shining in a reflected glow below. I sat for an hour or more, reading a little but for the most part enjoying the tranquillity and basking in the view.

After breakfast, two of us took another stroll around the waterfront, before heading off again in search of some more Pugin churches in Co Wexford.

From Ferrycarrig, we turned up past the Irish National Heritage Park, along the western banks of the Slaney, through Polehore and Killurin to Ballyhoge, and then turned east to find Bellvue, looking down on the river, where about two dozen swans were resting in the morning sunshine. 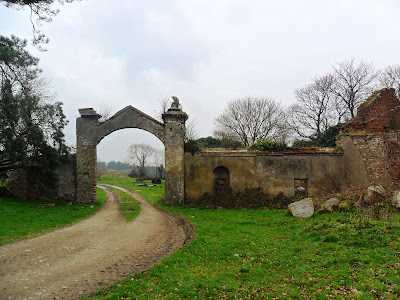 The burned-out ruins of Bellvue, built by the Ogle and Cliffe families and torched in 1923 (Photograph: Patrick Comerford, 2011)

George Ogle built the first mansion at Bellvue in 1737, and it passed to the Cliffe family at the beginning of the 19th century. Anthony Cliffe rebuilt Bellvue, and Daniel Robertson designed a magnificent portico formed by eight Ionic columns and approached by a flight of steps that extended the entire length of the central block, and fine, boldly projecting wings extending on either side of the two-storey house.

The Cliffe family stirred local controversy when they changed their membership from the Church of Ireland, becoming Roman Catholics in 1856. They built a new chapel adjacent to Bellvue in 1858-1860, and although the chapel was designed by J.J. McCarthy, he used earlier plans by Pugin. The Building News reported in 1859: “A new church has lately been erected by A. Cliffe ... from the designs of A. Welby Pugin; it is designed in the Early Decorated period and it is well executed by a local builder.” 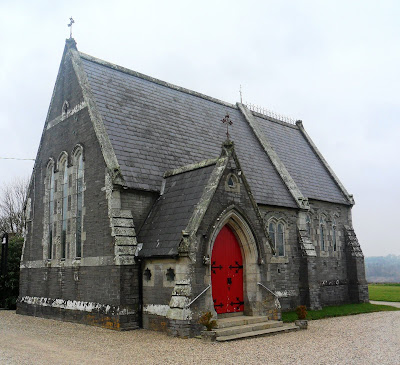 The Cliffe chapel in Bellvue … built ‘from the designs of A. Welby Pugin’ (Photograph: Patrick Comerford, 2011)

In an act of political vandalism, Bellvue was burned to the ground early in 1923. It is amazing that the chapel survived. The roof, in a style typical of Pugin, separates the nave at the west end from the chancel at the east end. The north side betrays how the chapel was once attached to the Cliffe manion, whose forlorn and scattered ruins stand nearby.

From Bellvue, we drove back into Ballyhoge, and north past Macmine Castle to cross the river at Edermine and to visit Edermine House.

Pat Doyle was busy at the time with the laying of a new drive, and invited us to return after lunch. And so we took an hour and a half out to visit Templeshanbo, where a small babbling brook separates the old monastic site associated with Saint Colman from the Church of Ireland parish church and its small churchyard. Here are buried my great-great-grandfather, James Comerford (1775-1825) and his father, Edmond Comerford (1722-1788). 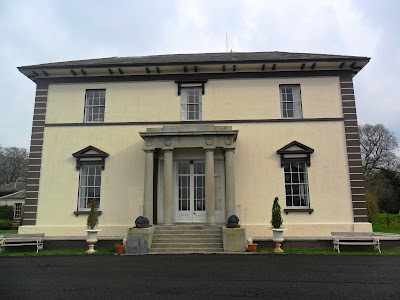 We returned through Enniscorthy to Edermine House, which was built by Sir John Power, of Power Distillery fame, in 1838. This impressive collection of buildings has been described as “possibly the most interesting domestic architectural ensemble in County Wexford.”

Edermine House, a fine example of the Greek revival style, is a two-storey, three-bay Italianite villa designed by John B. Keane, with a handsome portico formed by Doric columns. There is a five-bay side elevation with a Venetian window.

Pat Roche of Rochfort House bought Edermine House in 1977 and now owns many of the properties in the surrounding countryside. He has taken great pride in Edermine and has spent a vast amount on maintaining, preserving and restoring the house.

The Pugin Chapel and the once splendid Victorian iron conservatory at Edermine House (Photograph: Patrick Comerford, 2011)

He welcomed us into Edermine, to see the house, the chapel and the once splendid Victorian iron conservatory designed by Richard Turner and James Pierce – an extraordinary curvilinear conservatory with a central semi-dome, flanked by plant houses that once housed a grapery and a peachery.

But we were here to see the chapel commissioned by Sir James Power and his wife, Jane, built in the 1850s. Lady Power was a daughter of Pugin’s Irish patron, John Hyacinth Talbot, and the Power family later intermarried with the Cliffe family of Bellvue. 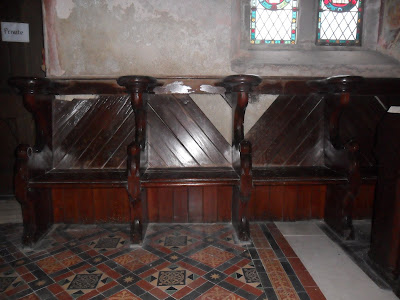 The extended collegiate seating provides a sedilia … further evidence of Pugin’s hand in the chapel at Bellvie (Photograph: Patrick Comerford, 2011)

A plaque on the door and a second inside the chapel has led many to believe that the chapel is too late to have been designed by AWN Pugin, and they have ascribed it to either his son, Edward Welby Pugin, or to JJ McCarthy. However, Pat Doyle has long believed that the chapel is an original work by Pugin and that McCarthy merely supervised its later construction, and many contemporary writers believe the intermarriages between the Talbot and Power families underpin the supposition that the chapel was originally designed by the elder Pugin and that the project was supervised either by his son or by McCarthy. 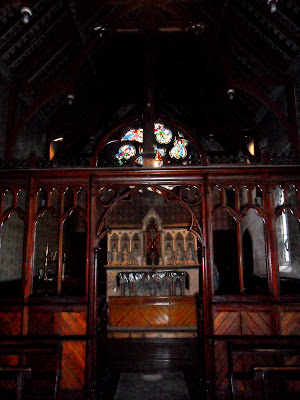 The interior of the chapel is well-preserved, and on first sight it looks remarkably similar to the interior of the Pugin chapel we visited on Friday in the former Presentation convent in Waterford. The chapel in Edermine retains Pugin’s rood screen, and the walls are embellished with Pugin’s decorative “diaper work.” Here too is his typical mediaeval-style hammer-beam roof. The reredos, rood screen, chancel tiles and collegiate-style seating all point to this as an original Pugin work.

Phoebe Stanton points out: “The window of the chapel is exactly like various drawings in the early Pugin notebooks.” Further evidence of Pugin’s original design of this chapel is provided by the extension of the chapel seating from the nave into the chancel to provide three extra places for a sedilia – for priest, deacon and subdeacon, a liturgical insistence that could only be Pugin’s.

Pat Doyle is proud of his role as the custodian of a Pugin chapel. He told us how he also rescued the original pulpit and cathedra from Saint Aidan’s, Pugin’s cathedral in Enniscorthy. However, the paintwork in the chapel is peeling, some of the stonework is crumbling, there are signs of the onset of damp and the whole building is in urgent need of tender conservation and restoration work. This is a task that should not be left to Pat Doyle alone, as this is a beautiful, unique part of the architectural heritage of Ireland.

Neither Bellvue nor Edermine is listed by Rosemary Hill as a Pugin building, so we left Edermine feeling we had made some exceptional discoveries during our weekend tour of “Pugin-Land.”

From Edermine, we drove back into Enniscorthy and on along the banks of the Slaney to Bunclody, for a stroll through the village that had once been home to generations of the Comerford family, and for a late lunch in the Millrace. It was dark by the time we got back to Dublin. 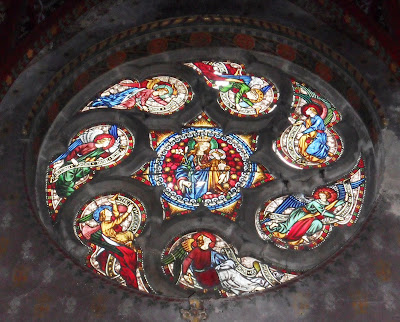 Posted by Patrick Comerford at 15:51