A cathedral with an unusual mixture of Gothic styles 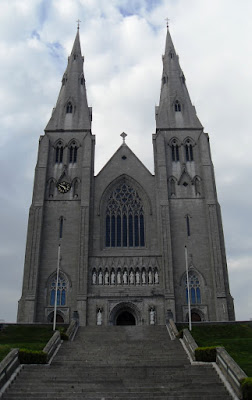 I have been to Armagh many times, and to Saint Patrick’s Cathedral, the Church of Ireland cathedral in the city, on many occasions.

However, last week while I was in Armagh, I realised I had never been in the other Saint Patrick’s, and decided to visit the Roman Catholic cathedral, which is an important architectural essay in Gothic Revival, and a spectacular mixing of styles by two clashing architects, with ‘fourteenth-century’ works standing on top of ‘sixteenth-century’ works.

The cathedral is fascinating – for while it was being built the architects changed, and the change of architects resulted in a decision to change the architectural style, just as the walls were half-way up.

Archbishop William Crolly (1835-1839) acquired the site from Richard Dawson (1817-1897), 1st Earl of Dartrey, a Liberal Unionist whose family had extensive land-holdings in Armagh and Monaghan, and who gave their name to Dawson Street in Dublin.

In Dundalk, Duff had modelled his cathedral on the Chapel of King’s College, Cambridge. In Armagh, he drew on York Minster for his plans for Saint Patrick’s, which he wanted to build in the Perpendicular Gothic style.

The foundation stone was laid and blessed on Saint Patrick’s Day, 17 March 1840, and in Duff’s lifetime, “34 feet of the walls were built for £26,000, Dr Crolly himself personally supervising the work with the assistance of several foremen.”

But by the time work had begun on Duff’s cathedral, an architectural renaissance had taken place under the influence of AWN Pugin. By then, there was a growing tendency towards purer styles, and the Perpendicular Gothic was seen as a decadent modification, and in 1847 the Dublin architect JJ McCarthy had strongly criticised Duff’s work in the Irish Catholic Magazine. By then, however, the Famine had brought building work to a virtual halt, and cathedral funds were being diverted to the needs of the hungry.

Meanwhile, Duff’s life was overshadowed by personal sorrow, and he died in the early hours of 10 May 1848 after a stroke probably brought on by the death of his daughter Ann three days previously – he had already been deeply affected by the death of his only surviving son, Robert, the previous year.

Cholera then claimed the life of Archbishop Crolly, who died in 1849, and at his own request he was buried in the sanctuary of the unfinished cathedral.

Eventually, in 1853 a new building committee settled with Duff’s widow for £100 cash down, and returned all his drawings and papers for the cathedral. McCarthy was then appointed as architect, and he drew up was a continuation design in the 14th century, French Decorated Gothic style. 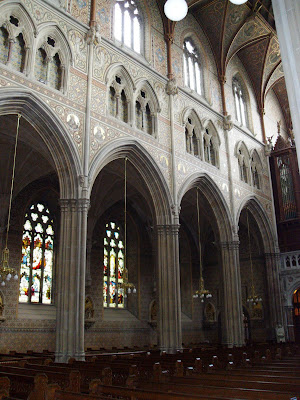 Although McCarthy had famously attacked Duff’s work in 1847, he was stuck with the ground-plan, as the walls had reached the tops of the aisle windows, but without tracery. However, the architectural historian Jeanne Sheehy points out, he “completely changed the appearance of Duff’s design by getting rid of the pinnacles on the buttresses, the battlemented parapets on the nave and aisles, and by making the pitch of the roof steeper.”

McCarthy also introduced flowing tracery and numerous carved details. Maurice Craig comments dryly: “Characteristically, he altered the style from Perpendicular to Decorated, so that the spectator must support the absurdity of ‘fourteenth-century’ works standing on top of ‘sixteenth-century’ (except for the tracery which was harmonised).” However, Maurice Craig concludes that “in most ways it is a very successful building.”

Archbishop Dixon organised a great bazaar in 1865 that raised over £7,000 for the building project, and items for sale were donated by Pope Pius IX, the Emperor of Austria and Napoleon III.

The cathedral was completed under Archbishop Daniel McGettigan (1870-1887) and was dedicated on 24 August 1873. The sacristy, synod hall, grand entrance, gates and sacristan’s lodge were built later to designs by William Hague, who was working on designs for a great rood screen when he died in March 1899. The solemn consecration of the cathedral took place in 1904. 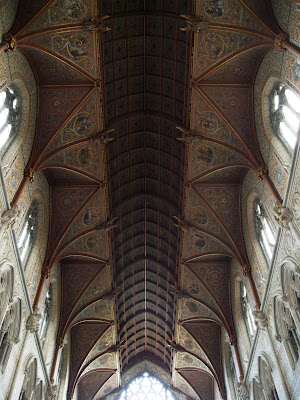 To complicate matters, the interior decoration of the cathedral, which was applied to the conflicting Gothic styles of both Duff and McCarthy, is also the work of different teams. The 1904 designs were the work of Ashlin and Coleman of Dublin, who were the heirs to Pugin’s style of work, but a great deal of this work has been removed in the wake of the liturgical reforms introduced by the Second Vatican Council.

An exquisite example of artistic workmanship – a magnificent, marble Gothic altar with a replica of Leonardo Da Vinci’s Last Supper carved by the distinguished Roman sculptor, Cesare Aureli, was moved to Saint Patrick's Church, Stonebridge, where it still stands.

What was a fine late Gothic revival chancel has been replaced in with chunks of granite, brass screens were removed and then welded together to form a screen in front of the reredos of McCarthy’s Lady Chapel, modern tiling was laid on the floor of the entire sanctuary area and a new tabernacle was placed in the Sacred Heart Chapel which had been designed by Ashlin and Coleman.

But, having been back in Saint Mary’s Cathedral in Killarney earlier in Holy Week, I found the damage afflicted on the cathedral in Armagh has not been on the same scale, and Saint Patrick’s retains much of the majesty – and eccentricity – of Duff’s and McCarthy’s designs.
Posted by Patrick Comerford at 11:15