‘Many are called, but few are chosen’ 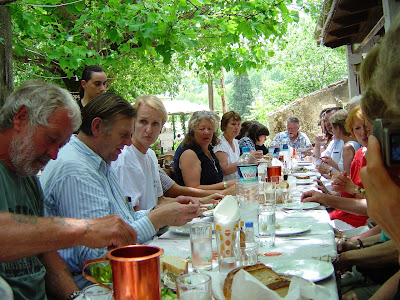 Banqueting at the end-of-term dinner organised by the Durrell School of Corfu ... we are all invited to the heavenly banquet, but are we ready to accept the invitation (Photograph: Patrick Comerford)

I was called yesterday and asked to preside today [Sunday 9 October 2011] at the Sung Eucharist in Christ Church Cathedral, Dublin.

Today is the Sixteenth Sunday after Trinity. The Residential Priest Vicar, the Revd Garth Bunting, is preaching, and the Scripture readings are: Isaiah 25: 1-19; Psalm 23; Philippians 4: 1-9; and Matthew 22: 1-14.

The processional hymn is Lord of all hopefulness, Lord of all joy by Jan Struther; the Gradual is Help us, O Lord, to learn, by William Watkins Reid; the Offertory hymn is Lord, enthroned in heavenly splendour by George H. Bourne; and the Communion Hymn is Jesu, thou Joy of loving hearts, a 12th century Latin hymn translated in the 19th century by Roy Palmer. The Communion Motet is O sacrum convivium by Tomas Luis de Victoria. The Post-Communion hymn is Jesus, good above all other by Percy Dearmer.

Last Sunday’s Gospel reading told the story of the tenants who refused to hand over the crop in the vineyard to the owner’s agents and son.

This morning’s Gospel reading tells the parable of how we are all invited as gusts to the wedding banquet:

Once more Jesus spoke to them in parables, saying: “The kingdom of heaven may be compared to a king who gave a wedding banquet for his son. He sent his slaves to call those who had been invited to the wedding banquet, but they would not come. Again he sent other slaves, saying, ‘Tell those who have been invited: Look, I have prepared my dinner, my oxen and my fat calves have been slaughtered, and everything is ready; come to the wedding banquet.’ But they made light of it and went away, one to his farm, another to his business, while the rest seized his slaves, mistreated them, and killed them. The king was enraged. He sent his troops, destroyed those murderers, and burned their city. Then he said to his slaves, ‘The wedding is ready, but those invited were not worthy. Go therefore into the main streets, and invite everyone you find to the wedding banquet.’ Those slaves went out into the streets and gathered all whom they found, both good and bad; so the wedding hall was filled with guests. “But when the king came in to see the guests, he noticed a man there who was not wearing a wedding robe, and he said to him, ‘Friend, how did you get in here without a wedding robe?’ And he was speechless. Then the king said to the attendants, ‘Bind him hand and foot, and throw him into the outer darkness, where there will be weeping and gnashing of teeth.’ For many are called, but few are chosen.”

Posted by Patrick Comerford at 06:32