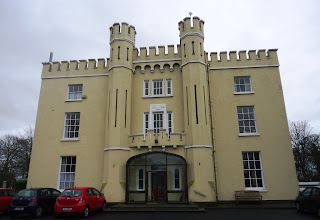 The Jesuit Centre of Spirituality at Manresa ... based in the former Baymount Castle in Clontarf (Photograph: Patrick Comerford, 2013)

I spent Ash Wednesday on retreat in Manresa, the Jesuit Centre of Spirituality in Clontarf. The retreat was facilitated by two Jesuit members of the Manresa team, Father Piaras Jackson, who until recently was editor of Sacred Space www.sacredspace.ie the daily prayer site, and Father Brendan Comerford, a former Director of Novices in the Jesuit Novitiate who also teaches spirituality in the Milltown Institute.

Throughout the day, we were in the Conference Room, the Prayer Room and the Pedro Arrupe Chapel. But there was time too after lunch and at the end of the day for a stroll down to the shoreline at Dollymount looking out onto Bull Island and the wooden bridge across to the narrow water. 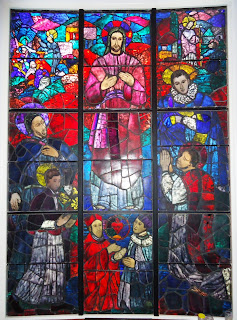 The Jesuit saints ... one of the Evie Hone windows in the Prayer Room (Photograph: Patrick Comerford, 2013)

The focus points in the Prayer Room are five spectacular stained-glass windows by Evie Hone (1894-1955), originally designed for the Jesuit House in Rahan, near Tullamore. When the house in Rahan was closed, the windows were relocated to Manresa, where a new prayer room was built in 1992, designed to display them at their most resplendent.

These five windows, with their expressive intensity and vibrant colours, create an atmosphere of warmth and immediacy that enriches the prayerful atmosphere in Manresa.

Evie Hone was born into a family of distinguished Irish artists. She was a descendant of Joseph Hone, a brother of Nathaniel Hone. At the age of 11, she became partially lame from infantile paralysis. A visit to Assisi in 1911 made a profound impression on her. In 1921, with her friend Mainie Jellett (1897-1944), she became a pupil of the cubist painter Albert Gleizes, who had turned increasingly to religion.

Today, Evie Hone’s reputation rests largely on the expressive intensity of her stained glass output; one of the best known of her works is the window in Eton Chapel. But she was also closely involved in the Irish art scene, and once had a studio in the coachyard in Marlay Park, Rathfarnham.

The Jesuit community in Manresa lives in a house that was originally known as Granby Hall and then as Baymount Castle.

At one time, the house was residence of James Traill, Church of Ireland Bishop of Down and Connor (1765-1783). He was consecrated bishop on Saint Michan’s Church, Dublin, in 1765, and died suddenly in Abbey Street, Dublin, in December 1783.

Robert Warren was a property speculator and developer and he made a great deal of money on the sale of lands to the Dublin-Bray railway. He built Killiney Castle (now Fitzpatrick’s Castle Hotel), and Victoria Castle (now Ayesha Castle). He lived in Killiney Castle but also had a town house at 40 Rutland Square (now Parnell Square). Killiney Castle had demesne of 33 acres, and he built Holy Trinity Church on part of the lands.

However, when he died on 20 June 1869 his estate foundered mainly due to the failure of a speculative development in the Foxrock and Galloping Green area and his property was sold off through the incumbered estates court.

Meanwhile Baymount Castle had been acquired by the Irish Loreto Sisters, who ran a school there. When the house was destroyed by fire in 1851, the Loreto Sisters renovated it once again, but they later sold it and moved to Balbriggan.

In 1898 the castle was bought by Lord Ardilaun, a member of the Guinness family and the owner of the neighbouring Saint Anne’s estate.

When World War I began, William Lucas Scott opened a preparatory school for boys that continued in Baymount Castle until 1936.

The castle was then it acquired by John Tudor Gwynn (1881-1956), at the time the Irish Affairs Correspondent of the Manchester Guardian, and a former colonial administrator in India. His father, John Gwynn (1827-1917), was Dean of Raphoe and a lecturer in theology in Trinity College Dublin; his mother, Lucy Josephine O’Brien, was a daughter of the Irish patriot, William Smith O’Brien. Dean Gwynn was also the father of the Robert Malcolm Gwynn (1877-1962); another son, Brian Gwynn, was the father-in-law of Archbishop George Simms.

In 1948, the Archbishop of Dublin asked the Jesuits to establish a north-side retreat house, and they bought Baymount Castle, with 17 acres. Retreats began in 1949. Building work on the new retreat house began in 1966, and it opened in 1967.

Looking out onto Bull Island and Dublin Bay from the shore at Dollymount below Manresa (Photograph: Patrick Comerford, 2013)

Posted by Patrick Comerford at 22:30

I am sorry that you didn't mention or tell us more about Evie Hone's connection with St John's,Sandymount and her time as a postulant(or did she enter the noviciate) at the Community of St John. Is there much known about this time in her life ? Was there a specific "push" to Rome ? Alan Robinson

interesting but...tell us more about the content of the retreat, and the atmosphere there. Aisling

Why so much history? Do write more about help given on retreat. Was there a spiritual return for you.