Loreto Abbey ... back on the market once again (Photograph: Patrick Comerford, 2013)

The Commercial Property supplement of The Irish Times reported this week [29 August 2013] that Loreto Abbey, a collection of former college, school and church buildings in Rathfarnham, is up for sale at a “knockdown price” of €2.5 million after lying idle for the past 14 years.

In its report this week, The Irish Times noted: “Whatever enterprise ends up in Loreto Abbey, the promoters will obviously have to consider the provision of a car park under part of the front grounds.”

The estate agents Savills have been appointed by the receiver David Carson to handle the sale of the Georgian house, Pugin chapel and other buildings which stand on 1.82 hectares (4.49 acres) on Grange Road in Rathfarnham.

The property developer Liam Carroll bought Loreto Abbey and an adjoining 12 acres in 1999, supposedly for €14 million, and later built and sold 10 blocks of apartments with 271 units.

Carroll also had planning permission to convert some of the buildings into a 113-bedroom nursing home but the Irish financial crisis put an end to those plans. His company, Danninger, was one of the first to fall in the property crash.

Since NAMA took over Loreto Abbey, the buildings and grounds have fallen into disrepair, and the gates have been padlocked, barring entry to anyone with an interest in local or architectural history and heritage.

The buildings have an overall floor area of 8,627 square metres (92,860 sq ft) and it is reported they have been extensively weather-proofed over the last six months. The site’s residential zoning means the buildings could become apartments, a nursing home, or be used for medical facilities or education. 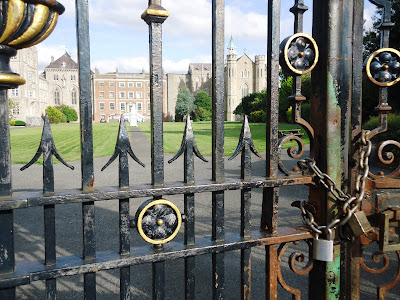 Pugin’s chapel in Rathfarnham ... behind rusting gates that are chained and padlocked (Photograph: Patrick Comerford, 2013)

Jill Horan of Savills told The Irish Times this week that the property provides developers, speculators and owner-occupiers with a “truly superb canvass to work from.” She said the buildings had huge development potential and offered developers an opportunity to create a unique residential or commercial scheme.

Most of the buildings on the site are linked by the central Georgian house once known as Rathfarnham House, which is flanked by the Irish granite wings of the church (1846) and Saint Anne’s to the south, with Block L and the concert hall added between 1863 and 1903.

The buildings are a treasure trove of architectural gems, from the beautiful church with its Gothic vaulted ceilings and stained glass windows to the abbey, with its splendid plasterwork and gracious living accommodation.

The buildings are set back from Grange Road and are approached by a double driveway. They overlook attractive pleasure grounds with mature trees.

Rathfarnham House was designed in 1725 for William Palliser (1695-1762) by Sir Edward Lovett Pearce, who also designed Parliament Buildings in College Green, Drumcondra House (now part of All Hallows’ College), many of the houses in Henrietta Street, including Nos 9, 11 and 12.

William Palliser’s father, William Palliser (1646-1727), was once Professor of Divinity in Trinity College Dublin and later Archbishop of Cashel (1694-1727). It is said Palliser’s guests at Rathfarnham House included Dean Jonathan Swift, George Frideric Handel, who first visited Dublin in 1741, and Thomas Moore, who is believed to have written ‘Oft in the Stilly Night’ here. The story is told that during a banquet one night, the gathering wanted Moore to compose a poem, and he was locked in one of the rooms until he came out with the masterpiece. However, Moore was born in 1779, and was only 16 when the last of Pallisers died, and ‘Oft in the Stilly Night’ was probably written in 1815, when Rathfarnham House may have been vacat..

When William Palliser died in 1762, he had no children and Rathfarnham House was inherited by his cousin, the Revd John Palliser. When John died in 1795, the house was bought by George Grierson, the King’s Printer in Ireland. When Grierson moved to a new house in Woodtown, Rathfarnham House was left unoccupied for a few years until 1821, when the house and 40 acres were bought for £2,000 by Archbishop Daniel Murray for the newly-founded Loreto Order.

Rathfarnham House then became known as the Abbey, and between 1838 and 1840, a new chapel was built for the nuns according to designs by AWN Pugin (1812-1852). In parts of the chapel, Pugin’s designs were inspired by the lantern in Ely Cathedral. 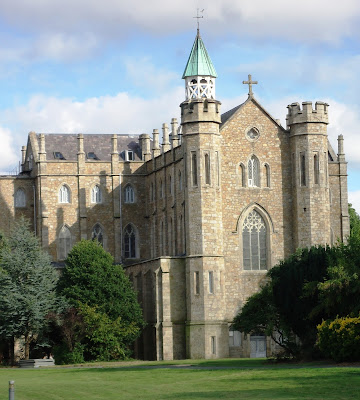 Pugin’s chapel in Rathfarnham dates from March to May 1839, the same time as his plans for Saint Michael’s Church, Gorey, Co Wexford, and Saint Chad’s Cathedral, Birmingham (Photograph: Patrick Comerford, 2013)

Pugin’s drawings for the church were prepared at the same time as his plans for Saint Michael’s Church, Gorey, Co Wexford, and Saint Chad’s Cathedral, Birmingham. They all date from 1839, and together they mark the end of the first phase of his career.

His drawings were completed by 28 May 1839. However, the building was simplified in execution John Benjamin Keane working with Patrick Byrne. The angels on either side of altar by the sculptor John Hogan are believed to be based on Hogan’s two eldest daughters.

The chapel has been closed to the public for a decade and a half or more. This is the Pugin work nearest to where I live and work, but when I tried to visit it about two years ago I was allowed through the gates to see the exterior of the chapel, but unfortunately I was unable to see inside.

I called by again this evening on my way home from work, but the gates are rusty and remain padlocked.

A major concern at this stage must be about securing the preservation of this unique part of our architectural heritage.

"In order to bring matters to a conclusion, our client has now requested us to seek offers in

we are guiding €2.5 million for the property"

Can anything be done to stop such a fine property from leaving state control for a song??