‘If I should die, think only this of me’ … why
we should never forget, even 100 years later 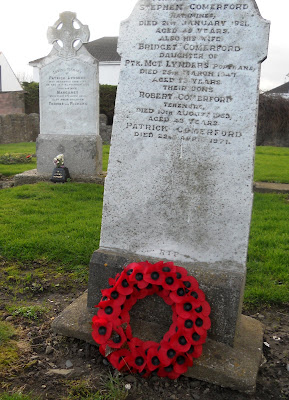 A wreath of poppies on my grandfather’s grave in Portrane last year (Photograph: Patrick Comerford)

The Chapel of the King’s Hospital, Dublin

For most of you here this evening, I am a little too old perhaps to be your father, but not old enough to be your grandfather.

But even my own father and mother were born after World War I was over … well, just.

How many of you have a grandparent who is 100 or older?

It is unlikely that anyone in this chapel this evening who is younger than I am has ever met someone who can remember World War I.

And so, it is likely that some of you are perplexed about why we are remembering a war that began almost a century ago, and those who died in it.

On the other hand, we are in the middle of a decade of centenaries, when people all over Ireland are recalling and in some cases even commemorating a series of nation-shaping events that took place about 100 years ago:

So, why do we keep on remembering, laying wreaths, blowing bugles, keeping a minute’s silence, wearing poppies … and so on?

Let me, for a few moments, share just two examples of why I think it is important to continue marking Remembrance Day, and then try to put that into context, asking some of the questions we should be addressing as we mark the centenary of World War I. 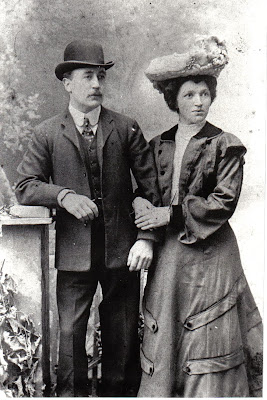 Stephen Edward Comerford was hardly a young man when he signed up with the Royal Dublin Fusiliers in 1915. He had already been widowed and seen the tragic death of his eldest child. When he left Dublin for Gallipoli in 1915, he was a 47-year-old man, leaving behind in Ranelagh his second wife, my grandmother – they were married just ten years earlier – and her five young children and step-children.

Stephen was discharged on 3 May 1916, three days after the Easter Rising ended, and was sent back to Dublin. Malaria was life-threatening but life-saving – for a few months at least. The war ended on 11 November 1918 and a month later, on 14 December, his youngest child – my father, also Stephen Edward Comerford – was born in Rathmines. Later, Stephen was decorated with the three standard World War I medals – the Victory Medal, the British Medal and the 1914-1915 Star. But his health continued to deteriorate, no more children were born, and he died alone in hospital at the age of 53.

Earlier this summer, I visited Grantchester, the home near Cambridge of the English war-time poet Rupert Brooke. Before he died during the Gallipoli landings in 1915, he wrote: 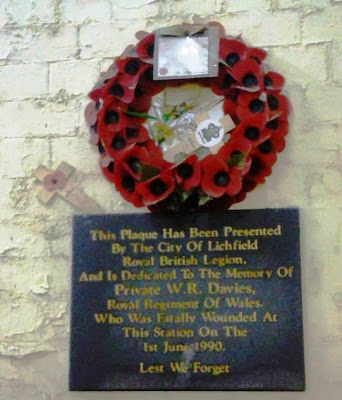 A wreath of poppies on the memorial to Private Robert Davies in Lichfield City station earlier this month (Photograph: Patrick Comerford, 2013)

My second example comes from a train station I know well in the middle of England. Part of my life-story is linked to the cathedral city of Lichfield. And regularly, as I go to catch a train at Lichfield City station, my eye is caught by a poppy wreath hanging on a monument to a teenage soldier who was shot dead in the station in 1990. Private Robert Davies was off-duty and only 19 when he was shot dead by the IRA on 1 June 1990, waiting for a train home to his parents in Wales. He had been a soldier for only 12 weeks.

Two years ago, a new walkway behind the station in Lichfield was named Robert Davies Walk. His parents Des and Helen Davies were present, and his father said: “There is now a little part of Wales in the heart of England.”

Robert Davies was little older than most of you are this evening. Today he would be 42. Unlike, my grandfather, who was in his 40s, Robert Davies had no children or grandchildren – he is remembered by his sister and his parents, still grieving a young man murdered by terrorists who had the gall to take life, to murder, to create grief, all in the name of this country, and in the name of all who live on this island.

At the Diocesan Synod for the Diocese of Europe earlier this year, Archdeacon Jonathan Lloyd posed a number of pertinent questions for discussion:

World War I is beyond the memory of all of us in this chapel this evening. But all of us live with its consequences. For that war led eventually to the monster that became Nazi Germany; it tore apart the Balkans in a way that continues to create suffering from Bosnia to Bucharest, for Romanies and other minorities across Europe; and it contributed too to too many problems we still face in the Middle East with the drawing of artificial boundaries and the creation of artificial states.

Meanwhile, Archdeacon Jonathan Lloyd suggests a number of ways we can best honour and mark the coming centenaries, including:

● Hearing the stories from people of all sides of the conflict.
● Writing and using prayers that do justice to all the feelings that are going to arise.
● Holding candle-light vigils on 4 August next.
● Examining the lessons we should continue to learn today.
● Remembering key Christian witnesses and heroes. Not all of them are men, as the monument to the women of World War II in Whitehall in London reminds us. Not all of them are soldiers, as in the case of Nurse Edith Cavell, or the brave people who went against popular culture and declared themselves conscientious objectors. They include doctors and medics with the Royal Army Medical Corps. They include non-combatants of every age and generation whose cities, towns, villages and farms were destroyed;
● And, finally, praying for forgiveness, healing and peace. 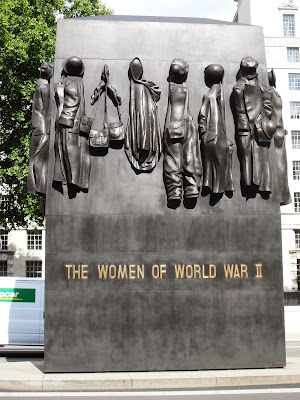 I am a pacifist, but I willingly wear a poppy on Remembrance Day, if only to say that my grandfather and men like him should never have been neglected, and their sad stories should never be forgotten, nor the sad stories of the widows and children they left behind.

I wear it if only to say that the murderers of 19-year-old Robert Davies in Lichfield should not have the last word about the value of a young man’s life, nor about what it is to be Irish today.

This evening, let us pray that we may find the ways needed to put all wars behind us, to put aside all hatred and violence.

Let us pray that when we remember that we remember with sorrow, with gratitude and with forgiveness, but without bitterness or anger.

Let us pray that the call of nationalist ideologies may never twist us, may never distort the love we should have for others, and never allow us to deny our shared humanity. 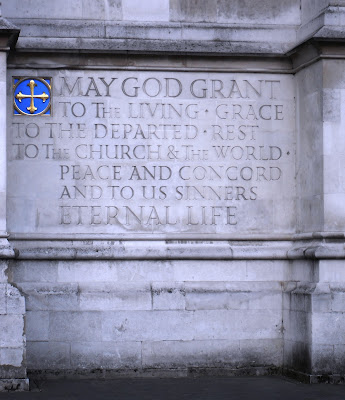 Canon Patrick Comerford is Lecturer in Anglicanism, Liturgy and Church History, the Church of Ireland Theological Institute, and an Adjunct Assistant Professor, Trinity College Dublin. This sermon was preached at the Remembrance Day Service on 10 November 2013 in the Chapel of the King’s Hospital, Dublin.