A Lichfield
eccentric who gave
his name to an
Irish town

Stowe House ... home in the 1770s to Richard Edgeworth, who also gave his name to a town in Ireland (Photograph: Patrick Comerford)

I am equally at home in Lichfield and in Ireland, and so I have often been fascinated by some of the Irish names I find on houses and streets in Lichfield, including Donegal House in Bore Street, and Ardmore Cottage and Ardmore House, which have been Grade II Listed Buildings with Nether Beacon House since 1973.

Donegal House takes its name from the Chichester family, who held large estates near Lichfield but who were a politically powerful family in Ireland, where they had the titles of Marquis of Donegall and Earl of Belfast.

However, I have never discovered how the pretty seaside village of Ardmore in Co Waterford – the inspiration for many novels by Norah Roberts – gave its name to two timber-framed houses daring from the late 17th or early 18th century.

But naming and exchanging names works both ways. The Chichester family of Fisherwick Hall, who had a vault in Saint Michael’s Church, Lichfield, gave their name to squares, streets and side streets in Belfast, including Chichester Street and Fisherwick Place.

So, why should I wonder that a family with strong Lichfield associations has given its name to Edgeworth House on Oakenfield in Lichfield and to a small market town in the Irish Midlands?

Edgeworth was a failure as a student at both Trinity College Dublin and Oxford. He was still an undergraduate at Oxford, when he eloped with Anna Maria Elers, and the two were married in Gretna Green in 1763, and a church wedding took place on 21 February 1764. Their first child followed immediately, a son named Dick, who was born on 29 May just before Richard’s twentieth birthday.

Richard first visited Lichfield in 1776 at invitation of Erasmus Darwin, who introduced him to the intellectual and cultural circles centred in the Close. In Darwin’s house, he saw the doctor revive his drunken brother, found “nearly suffocated in a ditch.” At dinner with the Seward family in the Bishop’s Palace, he flirted briefly with the poet and biographer of Erasmus Darwin, Anna Seward (1747-1809), the “Swan of Lichfield” – until Darwin’s wife Polly revealed that Edgeworth was married.

Richard later reminisced: “How much of my future life has depended on this visit to Lichfield.” He returned regularly to Lichfield, and came to live in Stowe House in 1770. He was a tall, dark and handsome Irishman who made friends easily, and befriended other members of the Lunar Society. He channelled his energies into several inventive projects, and was a pioneer in a number of fields, including telegraph communications, agricultural machinery, and transport. He also flirted with Anna Seward’s attractive young ward and cousin, Honora Sneyd, and fell in love with her although he was married man with children.

The Edgeworth family’s coat of arms on the Market House in Edgeworthstown (Photograph: Patrick Comerford)

Honora, who had earlier rejected Thomas Day’s proposal, had lived with the Sewards in the Close from the age of nine. Richard took her back to live on the large estate her inherited from his father in Ireland, and there they had two more children.

Richard and Elizabeth – who had six more children between 1781 and 1794 – moved to Ireland in 1782. Elizabeth died there in 1797, and Richard – never the man to be a heart-broken widower – married for the fourth time a few months later on 31 May 1798, this time marrying Frances Ann Beaufort, the daughter of an Irish archdeacon. But he kept in touch with his friends in the Lunar Society, and when Darwin died in 1802 he wrote his obituary in the Monthly Magazine.

When John Saville died in 1803, Anna erected a monument to his memory in the cathedral. But she never forgave Richard, and she carried that grudge until she died in 1809.

Richard’s daughter Maria, who shared his interest in education, was the daughter of his first wife, Anna Maria. Today she is best remembered for her novel Castle Rackrent, but in her day she was recognised as a talented author, respected and admired by writers such as Sir Walter Scott, who wrote her epitaph in the cathedral, and Jane Austen.

Ardmore Cottage, Beacon Street … how did it acquire the name of an Irish seaside village? (Photograph: Patrick Comerford)

Edgeworthstown, a small market town in the Irish Midlands, recalls the most famous resident of Stowe House. The town, in east Co Longford, developed on Richard’s large Irish estate. When he was an MP in the Irish Parliament (1798-1800) it was known as St Johnstown, and the Anglican parish church he built there is still known as Saint John’s. In the 19th century, the place became Edgeworthstown.

Donegal House … named after a family that also gives its names to squares, streets and side-streets in Belfast (Photograph: Patrick Comerford)

Rev Canon Professor Patrick Comerford lives in Dublin, and returns regularly to Lichfield where he has family roots. 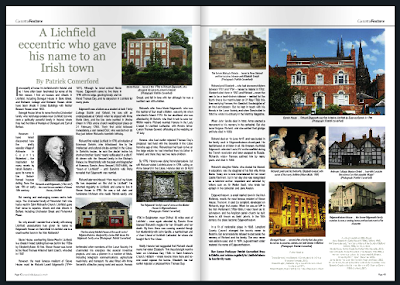 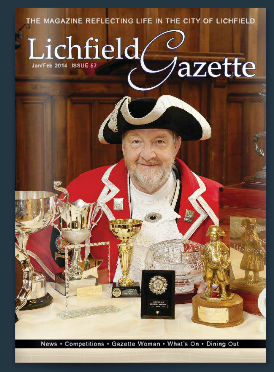 This essay and these photographs were published as a two-page feature in the January/February 2014 edition of the Lichfield Gazette (No 63), pp 42-43.