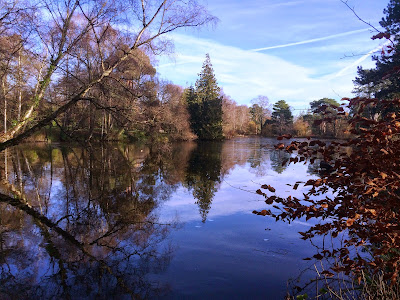 Winter sunshine and reflections in the ornamental lake beside the Boathouse Café at Farmleigh (Photograph: Patrick Comerford, 2014)

It has been a bright crisp sunny winter day, with clear blue skies and deceptively warm sunshine that almost carried a hint or promise of spring, perhaps even summer.

I started off this morning with the intention of visiting my GP for my regular B12 injection. But he was out, and it was suggested I should return later in the afternoon. I was out, and it took little imagination to change the day’s plans. Two of us decided to visit the Grangegorman Military Cemetery on Blackhorse Avenue, close to the Phoenix Park.

The cemetery opened in 1876 as a graveyard for the soldiers and families from Marlborough Barracks (now McKee Barracks), across the road, but some of the early graves include soldiers killed earlier in the Crimean War.

Many members of my grandfather’s regiment, the Royal Dublin Fusiliers, and their close relatives are buried in the graveyard. Until recently, it was a forgotten corner of Dublin, lost in the mist of obscurity created by the myths surrounding Irish nationalism.

Those buried here include Martin Doyle (1849-1940) from Gusserane, near New Ross, Co Wexford, who was a Sergeant-Major in the Royal Munster Fusiliers and was decorated with the Victoria Cross and the Military Medal by King George V for his bravery in World War I. He later fought in the Irish war of independence, and then joined the new Irish Free State Army.

The ambassadors of Turkey, New Zealand and Australia planted a Turkish Hazel in the cemetery in 2005 by to mark the 90th Anniversary of the Gallipoli landings on 25 April 1915.

This is the largest military cemetery in Ireland and it is managed by the Office of Public Works to standards set by the Commonwealth War Graves Commission. I expected it to be open this morning, but the gates were locked, there were no signs and the number provided in a brochure from the OPW was not being answered. 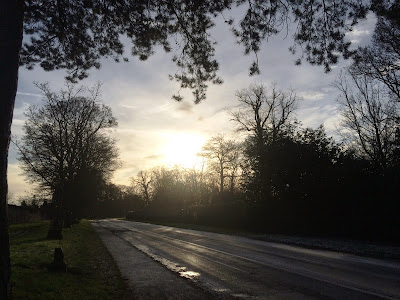 I crossed the road, and for a few minutes stepped inside the Phoenix Park, where a dusting of cold frost was covering the grounds, and the morning sun was bursting through the trees lining the avenue, where the only signs of human life were two single joggers and one man and his dog.

We decided to drive back around through the gates at Infirmary Road into the Phoenix Park, and realising that next year marks the bicentenary of the Battle of Waterloo, decided to look at the Wellington Monument, in a corner at the south-east end of the Phoenix Park. 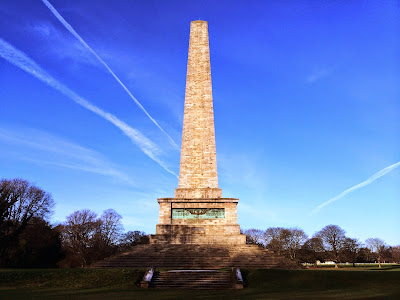 This obelisk, more correctly called the Wellington Testimonial, overlooks Kilmainham and the River Liffey. Standing at 62 metres (203 ft), this is the largest obelisk in Europe.

The Wellington Testimonial was built to commemorate the victories of the Duke of Wellington, who was born in Mornington House, now the Merrion Hotel in Merrion Street, Dublin, in 1769.

This is a testimonial rather than a monument, because it was erected while Wellington was still alive. The original plan was to erect it in Merrion Square, close to the house where he was born. But it was built in the Phoenix Park because of opposition from the residents of Merrion Square.

The obelisk was designed by Sir Robert Smirke and the foundation stone was laid in 1817, two years after Wellington’s defeat of Napoleon at the Battle of Waterloo. However, the project ran out of funds in 1820 and it was not completed until 18 June 1861. There were further plans for a statue of the ‘Iron Duke’ on horseback but this too ran out of funds.

There are four bronze plaques above the base of the obelisk. There were cast from cannons captured at Waterloo. Three of these panels depict major events in the life of Wellington’s military and political career: the Indian Wars, by Joseph Kirk; Waterloo by Thomas Farrell; and Civil and Religious Liberty, by John Hogan, recalling that Wellington was the Prime Minister who delivered Daniel O’Connell’s demands for Catholic Emancipation in 1829, despite opposition from among his fellow Conservatives.

The fourth panel has an inscription in Latin and English that reads:

Asia and Europe, saved by thee, proclaim
Invincible in war thy deathless name,
Now round thy brow the civic oak we twine
That every earthly glory may be thine.

The Duke of Wellington died on 14 September 1852 and was buried in Saint Paul’s Cathedral, London. 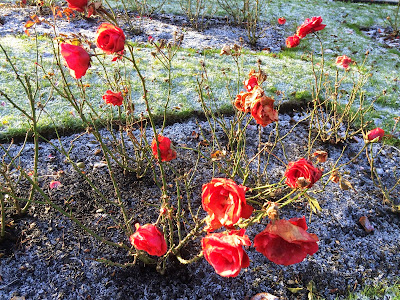 From the Wellington Monument, we crossed Chesterfield Avenue to the Victorian People’s Flower Gardens, close to the Parkgate Street entrance to the Phoenix Park.

The gardens, covering an area of 9 hectares (22 acres), were originally established in 1840 as the Promenade Grounds. But new gardens were laid out and enclosed in 1864. The gardens now include a large ornamental lake, children's playground, picnic areas and Victorian bedding schemes. 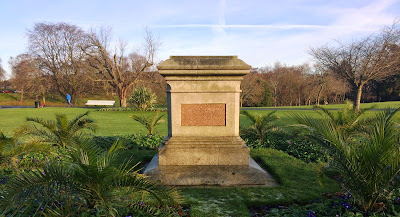 The pedestal of the former Carlisle Statue in the People’s Flower Garden (Photograph: Patrick Comerford, 2014)

A lonely sight in the centre of the gardens is the pedestal of the former Carlisle Statue. This was erected to thank George Howard (1802-1864), 7th Earl of Carlisle and Lord Lieutenant of Ireland (1855-1864), for his role in laying out the gardens. The statue, unveiled on 3 March 1870, was 8 ft high and cast in bronze by John Foley, showing Carlisle in the robes of a Knight the Order of Saint Patrick.

Carlisle had many Irish family connection: his grandfather, the 5th Duke of Devonshire, lived in Lismore Castle, Co Waterford. But his statue was blown up by the IRA in the early hours of 28 July 1956.

The statues of dead men are always soft targets – a nearby equestrian statue of Field Marshall Viscount Gough, also by John Foley, was constantly vandalised until it was removed in 1990. Yet Gough too was thoroughly Irish: he was born in Woodstown, Co Waterford, and when he died at Saint Helen’s, Booterstown, he was buried in Saint Brigid’s Churchyard, Stillorgan. 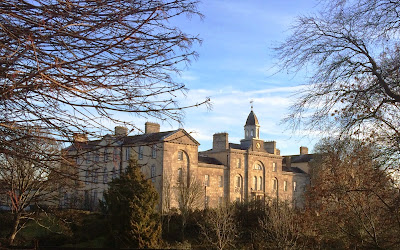 From the gardens, the bare winter branches of the trees provided a view of the Royal Military Infirmary, built in 1786 and now the headquarters of the Department of Defence.

This building, which gives its name to Infirmary Road, was designed by James Gandon and built by William Gibson. Gandon’s other buildings in Dublin include the Four Courts, the Custom House, the King’s Inns and O’Connell Bridge.

The Royal Military Infirmary was replaced in 1913 by the nearby King George V Hospital, later known as Saint Bricin’s Hospital. 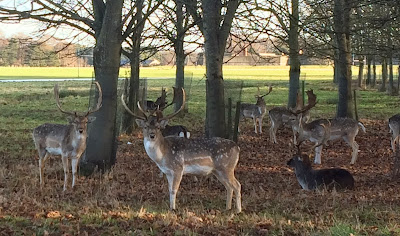 The deer near the Magazine Fort … was I watching them or were they watching me? (Photograph: Patrick Comerford, 2014)

We traced our steps back to the Wellington obelisk, and then drove on through the Phoenix Park, stopping to see the deer near the Magazine Fort.

They stood there regally, seemingly undisturbed by the people who came to see them. At one stage, I wondered whether I was watching them or they were watching me.

We doubled back by the Magazine Fort and the Wellington Monument before continuing on through the park to Farmleigh and a late morning coffee in the Boathouse Café.

We sat on the deck overlooking the Ornamental Lake; the bright sky was reflected in the lake, giving the waters a bright blue colour. The proprietors of the café claim the landscape here remains unchanged since the 19th century. We were soon lost in time, in a scene rich in promise at the end of December and the end of the year.

I was back at my GP in the late afternoon, after a wait of three hours received my B12 injection. I was glad of that change in plans that gave me a morning in the mid-winter sunshine in the Phoenix Park.

Posted by Patrick Comerford at 21:42