Arkadi: a monastery that is a symbol of Crete 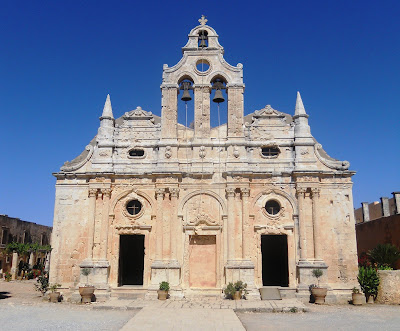 I went back into the mountains above Rethymnon, and along the corkscrew roads that weave their ways through olive groves and vineyards, across deep gorges and through pine-clad rocky outcrops and the villages of Adele, Loutro, Kyriana and Amnatos. This was a 25 km journey, but it took almost an hour to reach a height of 500 metres the north-west side of Mount Ida, where the Monastery of Arkadi (Μονή Αρκαδίου) stands on a fertile plateau.

With its strong, thick, square fortified walls, the first impression of Arkadi is of arriving at a fortress (Photograph: Patrick Comerford, 2012)

The first impression is of arriving at a fortress, with strong, thick, square fortified walls that can be entered only through one narrow gate that leads into a large square courtyard. In 1866, this monastery became the centre of a rebellion against the Turks in the Rethymnon district, where almost 1,000 besieged people – many of them women and children – huddled together and died in one of the most horrifying stories of Crete’s struggle for independence and union with Greece.

For many years, Arkadi featured on the back of the 100 drachma note

Arkadi is a national shrine, and for many years it featured on Greece’s 100 drachma note. In all, 943 Greeks, mostly women and children, had sought refuge in the monastery. After three days of battle and under orders from the hegumen or abbot of the monastery, they blew up barrels of gunpowder, choosing to die rather than surrender.

The massacre attracted the attention of the rest of the world to the cause of Crete, and 8 November is a day of commemoration throughout the island.

Although the monastery is dedicated to Saint Constantine, Cretan lore claims it was founded in the fifth century by the Byzantine Emperors Heraclius and Arcadius. Another account says the monastery was built on the site of an ancient city, Arcadia. 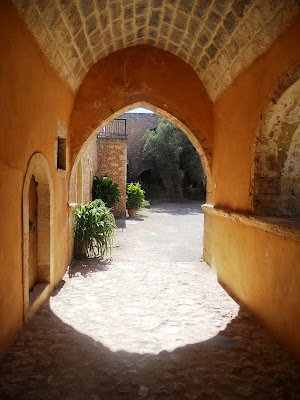 Many of the buildings in the monastery date from the late 16th century (Photograph: Patrick Comerford, 2012)

Whatever its origins, the principal church or katholikon of the monastery dates from the 16th century, and its architecture shows marked Renaissance influences, with a mixture of both Roman and baroque elements. By the time the church was built, the monastery was celebrated as a centre of science and art, with a school and a well-stocked library.

The church dates from the time monastery was restored and transformed by the Abbot Klimis Hortatzis. The new church was dedicated in the 1590s, and the monastery continued to grow economically and culturally.

When the Ottoman Turks captured Rethymnon in 1648, the monastery was pillaged. But the monks were soon allowed to return, and the monastery continued to prosper, so that 18th century travellers and writers who visited Arkadi described it as the richest and most beautiful monastery in Crete. 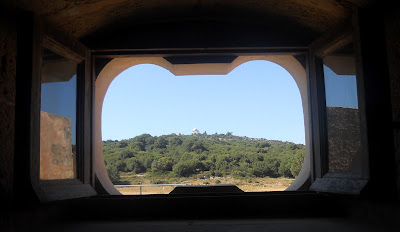 In the 18th century, visitors received a warm welcome at Arkadi, including Bishop Richard Pococke of Ossory (Photograph: Patrick Comerford, 2012)

Those visitors who received a warm welcome included the Irish traveller and writer Richard Pococke (1704-1765), who later became Bishop of Ossory (1756-1765) and Bishop of Meath. When he visited the monastery in 1739 he said: “It is a charming structure built around an extensive courtyard. They have a very fine refectory and in the centre of the courtyard a very pretty church with a wonderful facade in the Venetian architectural style.” The monastery had a large income, and by then more than 100 monks and around 20 priests at Arkadi.

When the revolt against Turkish rule broke out across Crete in 1866, the Abbot of Arkadi, Gabriel Marinakis, represented the Rethymnon region on the revolutionary committees. When a group of Cretan rebels took refuge in the monastery, they were soon joined by hundreds of local villagers fearing reprisals. By 7 November, the monastery was sheltering 964 people. Of the 325 men inside the monastery, 259 were armed; the rest of the people inside Arkadi women and children. 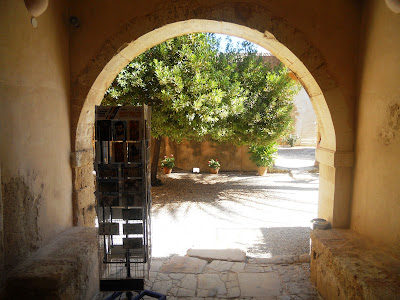 The entrance to the refectory, where many of the people sought refuge (Photograph: Patrick Comerford, 2012)

On the night of 7 and 8 November, an army of 15,000 Turks and 30 cannons took up positions on the hills around the monastery. A last request for surrender was met with gunfire, and the assault began. On the evening of 9 November, the Ottoman cannons destroyed the doors and the Turks entered the building, suffering further losses. 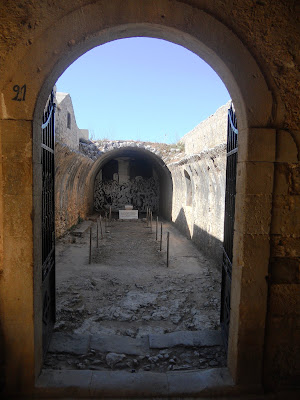 The charred remains of the powder room ... most of those who died in the explosion were women or children (Photograph: Patrick Comerford, 2012)

But the Cretan fighters were running out of ammunition. As the attackers poured in, the ammunition stored in the monastery exploded. The majority of the women and children had hidden themselves in the powder room. A popular version of the story says Konstantinos Giaboudakis from Adele gathered the villagers together and when the Turks arrived at the door of the powder room he set the barrels of powder on fire. It was the ultimate expression of the rallying cry of the Greek War of Independence: “Ελευθερία ή θάνατος, Freedom or Death.”

Of the 964 people who were there at the start of the assault, 846 were killed in combat or at the moment of the explosion; 114 men and women were captured; three or four escaped in the search for reinforcements; and 114 survivors were captured and sent as prisoners to Rethymnon. The women and children were held in the Church of the Presentation of the Virgin, the men were imprisoned for a year in difficult conditions.

The bodies of many of the dead Cretans were later placed in the windmill, which became a reliquary. The Turkish losses are estimated at 1,500. They were buried without memorials or their bodies were thrown in the gorges.

The massacre at Arkadi provoked international indignation and outrage, Giuseppe Garibaldi urged his supporters to join the Cretan struggle, Victor Hugo wrote comparing the drama at Arkadi with the destruction of Psara and the Siege of Missolonghi, and money was raised in Britain to send a ship, the Arkádi, to run the Turkish blockade.

The monastery remains a symbol of the struggle for independence in Crete. But it is also a working monastery, although there are only three monks there today.

The surrounding walls of the monastery form a quadrangle around an area of 5,200 sq m. Inside the walls are the abbot’s house, the monks’ cells, the refectory, the stockrooms, the powder magazine and the hospice.

The powder magazine is an oblong vaulted building, 21 meters long and 5.4 meters wide. It was destroyed entirely during an explosion in 1866, apart from a small part of the vault in the western part of the room. 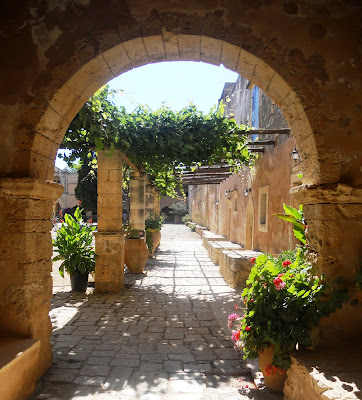 Inside the monastery (Photograph: Patrick Comerford, 2012)

The refectory, where Richard Pococke dined with the abbot and the monks in 1739, is now the museum on the northern aisle of the monastery. It was built in 1687, and it was there the last fighting took place during the assault of 1866. 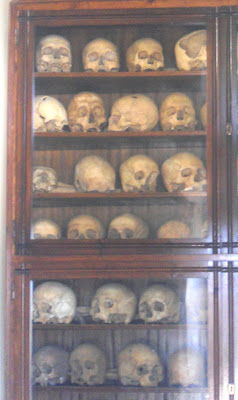 The skulls of many of the dead from 1866 are held in an ossuary outside the monastery walls. (Photograph: Patrick Comerford, 2012)

Outside the monastery, the former windmill is now an ossuary commemorating the people who died at Arkadi in 1866. Their skulls and their bones are displayed behind glass on shelves, clearly showing battle scars or pierced by bullets and cut by sword. An inscription says “Nothing is more noble or glorious than dying for one’s country.”

We returned through the same villages and valleys, but the downhill journey was much shorter. The sun was still high above the Fortezza of Rethymnon and sparkling along the sea water and the shore. 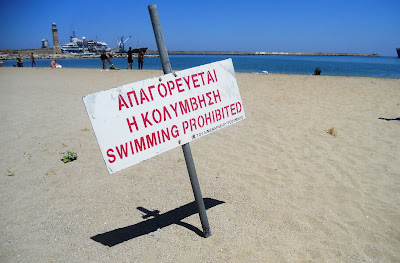 Earlier in the morning I had gone for a swim at the old town beach, between the harbour and the breakwaters. I first learned to swim at this beach in the 1980s. Only later, as I was leaving for lunch, did I read the notice that warns: “Απαγορεύεται η κολύμβηση, Swimming Prohibited.”

Posted by Patrick Comerford at 06:56

World of coincidences. I was at Arkadi years ago, but I didn't hear of Bishop Pocock's visit, whom I know of only from the diary of my great-great-great-great-grandfather George Stoney which is reproduced (with a couple of misprints such as Stanley) at http://www.offalyhistory.com/articles/154/1/Charleville-Demense-and-the-Burys-1600-1900/Page1.html

And I also bathed at that beach and wondered how safe a town beach was, but there were plenty of people bathing there.