Are there meeting points with Muslims
and Hindus in dialogue with Orthodoxy? 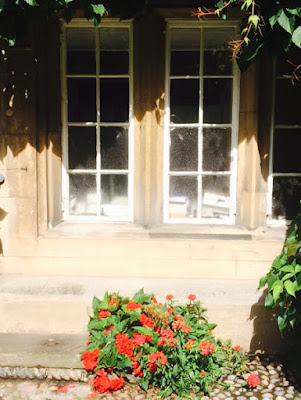 The summer conference in Sidney Sussex College moved from ecumenism to inter-religious dialogue this afternoon when Dr Dominic Rubin spoke about “Orthodox-Muslim interaction in Russia today: between ideology and theology,” and Dr Mangala Frost spoke on “Karma and the Cross: a dialogic study of suffering.”

Dr Rubin teaches at the Higher School of Economics in Moscow and his expertise is in inter-religious relations in Russia and the former Soviet republics.

He asked whether Russia is the bridge between Europe and Asia, and whether Islam is the new communism, the new enemy, in the west.

He shared his experience of talking to large numbers Russian Muslims about their belief and their identity. Although he said this is not dialogue, it involves taking the first step towards dialogue.

Deep dialogue is not happening in Russia, but then he wondered whether it is taking place anywhere else.

He pointed out that power structures influence dialogue, and recalled that the preamble to the Russian religious law recognises four traditional religions in Russia, with Russian Orthodox Church first among equals, alongside Jews, Muslims and Buddhists. But Baptists and Roman Catholics, for example, are not mentioned.

The law makes it easier to get permission to build an Orthodox Church than to build a mosque.

The four religions were chosen to reflect philosophy of Eurasianism. This theory was developed in 1913-1931, and the founding figures included the Russian Orthodox theologian Georges Florovsky.

A significant influence on the doctrine of the Eurasianists is found in an essay by the Russian Orthodox theologian, Nikolai Berdyaev, “The Sources and Meaning of Russian Communism.” However, Florovsky later withdrew his support, accusing it of raising the right questions but posing the wrong answers.”

Eurasianism idealises Genghis Khan, the Mongols and the Tartars. The Orthodox and Muslims in Russia. Muslims and Orthodox have inherited this situation and have to talk to and negotiate with one another.

He described a recent visit to Kazan, the capital of Tatarstan. With a population of over 1.1 million, this is the eighth most populous city in Russia. The population consists mostly of ethnic Russians (48.6%) and ethnic Tatars (47.6%), and the Kazan Kremlin is a World Heritage Site.

The multi-ethnic city is famous for Muslims and Christians living side-by-side in peace, and an artists who is a Sufi Muslims brought him on an intimate tour of a Russian Orthodox monastery.

Yet people can say outrageous things about who is the rightful owner of the land and the city’s heritage.

Is this dialogue? Is it even diapraxis? 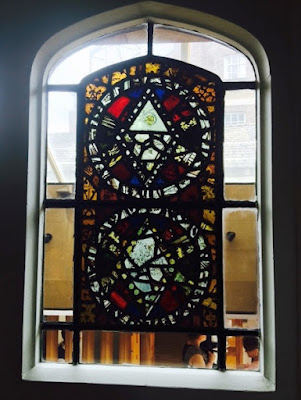 Surviving mediaeval glass in a window on the stairs to the Old Library in Sidney Sussex College, Cambridge (Photograph: Patrick Comerford, 2015)

Dr Frost (IOCS) spoke later this afternoon on “Karma and the Cross: a dialogic study of attitudes to suffering.”

She juxtaposed two different approaches to suffering, with a dual perspective as a former Hindu who understands karma, and as an Orthodox Christian who feels she has something to offer Hindus a fresh understanding of Christianity.

She hopes to improve mutual understanding, without necessarily finding agreement.

For the Monist strand, suffering is unreal or an illusion (maya), and so too is evil. The suffering body has no part in one’s real identity.

The second, more popular strand, Karma, suffering is real and a punishment for past actions or actions in past lives.

The third perspective, Bhakti, sees suffering as real but synonymous with birth. In this tradition, devotional love is met by God’s grace which can cancel out karma. This tradition subverts the Karma theory.

The appeal of karma provides a description of human nature. Its appeal lies in its offer of consolation, in offering an instant palliative and an answer to the problems of evil, it offers a justice in which sin is punished and virtue is rewarded, a type of “poetic justice,” and leads to hope rather than fatalism.

In Orthodox theology, the Fall is the rupture of communion with God, sin is “missing the mark,” death is not a “punishment from an angry God,” but the inevitable consequence of ruptured communion, and the Resurrection is the conquest of death and is the key to coping with suffering.

In Orthodox theology, answers to all problems, especially those of evil and suffering, come from an unswerving focus on the joy of Christ’s Resurrection. The Incarnation, Crucifixion and Resurrection of Christ are treated as an integral story of human salvation. In and through his Resurrection, Christ is seen as restoring once again what was lost – a full communion with and participation in the life of God.

Christians are called to be human icons of the divine image we bear.

Where Christianity, especially Orthodox Christianity, differs from Hindu traditions is to take the discussion about suffering beyond virtue-oriented, conventional moralism to the volatile, metaphysical dimension where the human-divine encounter seems to fail utterly for the believer.

She quoted Saint Mark the Ascetic in the Philokalia:

“Every suffering tests our will, showing whether it is inclined to good or evil. That is why an unforeseen affliction is called a test, because it enables a man to test his hidden desires.”

She said Christian belief in “a suffering God” who entered history to redeem it poses the most serious challenge to believers in Karma. Such a belief has rippling effects on the identity of those who chose to follow him.

Christians believe that in suffering for us, with us, and overcoming the ultimate evil of death, Christ, the God-Man, has changed forever the meaning of suffering.

In conclusion, she offered a reappraisal: “Paul spoke of the Cross as ‘foolishness’ to the Greeks and a ‘stumbling block’ to the Jews. On the whole, Hindus view the Cross with respect due to a holy man, but do they fully understand or appreciate the challenge the Cross poses to a Karmic view of life? I hope they are persuaded to reconsider.”

But she added: “Equally, I hope that the Orthodox become aware of the temptation to shrink, or distort, the awe-inspiring cosmic mystery of the Cross into simplistic strategies of comfort that come dangerously close to Karma.”

Once again, the day concludes with Vespers in the Chapel and dinner.

Posted by Patrick Comerford at 17:20