‘I’m trying to be Jesus to the migrants,’
as the Churches work together in Athens 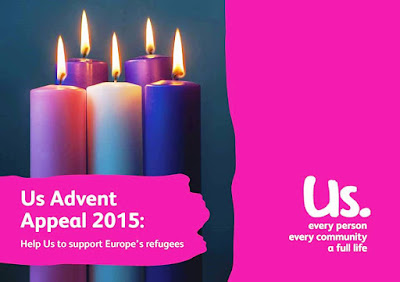 I may never read John 16 in the same way after taking part in the Opening Worship and Reflection for Us volunteers in the Diocesan offices of the Diocese of Birmingham yesterday [23 October 2015].

I was there as a Trustee of Us, the Anglican mission agency formerly USPG , (the United Society for the Propagation of the Gospel) as Carrie Myers, Us Volunteering Manager, and Davidson Solanki, International Programmes Manager, spoke of the work of Us.

Volunteers and representatives of over half a dozen dioceses in the English Midlands (and one from Wales) were present in a conference room looking across to Saint Philip’s Cathedral, which is celebrating its tercentenary this year.

We began with our Opening Worship that included a reading form John 16: 16-22: Saint Philip’s Cathedral seen from the offices of the Diocese of Birmingham during yesterday’s conference (Photograph: Patrick Comerford, 2015)

In our reflections, a representative from the Diocese of Lichfield pointed out that the Disciples are putting words into Christ’s mouth, for in this passage he does not utter the words ascribed to him in verse 17: “Because I am going to the Father.”

A woman from the Diocese of Southwell turned to those words about a woman in labour who is in pain and whose pain turns to joy when her child is born.

She described for us the sorrow and joy of her encounter with two women she met recently on a train travelling from Serbia to Austria. One was breast-feeding her child; the other was visibly pregnant, and in her opinion would probably give birth in about two months’ time – a Christmas baby, born at the same time as the Migrant Mary gave birth to the Christ Child who would himself become a refugee in the East Mediterranean.

It was a startling link between the pain of refugees and migrants in Europe and the Incarnation, the meaning of Christmas.

Later, in his presentation, Davidson Solanki recounted a story from the Diocese of Sittway in Myanmar (Burma), where health works often travel between remote areas by boat. He told the story of woman about to give birth, but who faced complications. Her parents were frightened and had no help. When the baby was delivered, the placenta was stuck, panic set in, but the traditional attendant not able to help.

By the time a local church worker, who was 2k m away, arrived the baby had died and the woman was in a serious condition. Although she could not help with the dead baby, she was able to help the mother who slowly recovered, and so the whole community was educated about primary health care.

In the Greece, where Father Malcolm Bradshaw is the senior chaplain at Saint Paul’s Anglican Church in Athens, the Anglican Church is responding to immediate needs created by the current refugee crisis in Europe.

Thousands of migrants from Syria, Iraq, Afghanistan, Pakistan and other countries have filled the squares of Athens.

It is not an easy journey, and they see Greece only as a transit point, with most of them hoping to reach Germany.

“Europe is offering us life,” one of them said. “Here we are respected as human beings.”

But their experiences are mixed ones, including those of shock, chaos and hope.

Maria, a captain from the Salvation Army, is preparing and distributing sandwiches in the squares of Athens from 4 a.m. each morning.

“I’m trying to be Jesus to the migrants,” she was reported as saying as she tries to feed and cope with traumatised women, children and old people.

We heard of traffickers, exploitation, shops that are reopening with some happy to find new custom in the midst of economic recession, and others exploiting the opportunities presented by the arrival of these people.

How do the Churches provide hope, or seek to find safe passage in these circumstances?

Despite their past differences, five churches have come together to work on these problems on the streets of Athens.

Us has been asked to work throughout Britain and Ireland on behalf of the [Anglican] Diocese in Europe as it seeks to fund this work.

As part of this year’s Advent Appeal, Us is inviting churches to pray for refugees in Europe and around the world as they light their Advent candles. The Diocese in Europe has chosen Us as the official agency for Anglican churches to channel donations to support its work to care for the refugees arriving in Europe.

Us is asking parishes and people to pray for the refugees in Europe while lighting Advent candles in churches. A prayer card provides reflections for each Sunday in Advent, and Advent candle prayer cards are available now. Donations will help to meet the emergency needs of refugees over the winter months, as well as funding a longer-term support strategy.

There is a particular focus on Greece, where local churches and agencies are working together to provide refugees with food, shelter and healthcare.

From 5,000 to 7,000 people arrive on the shores of Greece every day. In the midst of this crisis, the Anglican church is feeding 800 people a day on the streets in Athens.

The irony was not lost on anybody yesterday that Greece is the country with the greatest economic crisis in Europe yet is facing the greatest demand on its resources.

Meanwhile, winter is fast approaching, northern borders are closing, and Church leaders suggest Athens is going to be in the eye of the storm.

Immediate aid is needed, but this is not going to bridge the gaps between expectations and experiences, between what is possible and what is hoped for.

One person at the meeting asked whether there a long-term strategy for the Churches in Greece, how long is this sustainable, and whether the Churches are just facilitating people to take the onward journey. Most migrants see Greece as a transit point, and they do not want to stay there long-term.

We were told that even the churches in Greece are not sure about what the future challenges are. This is first time they have responded together, and despite past differences and mutual suspicions that are not avoiding the issue, instead have moved to the forefront.

“This is being the Church,” one person declared. The Churches are coming together in unity rather than working in isolation. But Churches in other countries too, all along the line up to Germany, need to ask themselves how the Churches can help to provide safe passage from the countries of origin, through passage and transit, to the final, hoped-for destination.

How can the Church be with these people all the way?

Meanwhile, Us is launching a new study resource next month, Migration and movement, which should prove poignantly relevant and useful in parishes and dioceses in this islands in Lent 2016.

I arrived in Birmingham in time for the early morning Holy Communion at 8 a.m. in Saint Philip’s Cathedral. Later, before the meeting, I was given a personalised tour of Saint Chad’s Roman Catholic Cathedral , perhaps one of the finest architectural works by AWM Pugin.

The meeting finished in time for me to get to Lichfield Cathedral for Evening Prayer. But even as I walked around Stowe Pool as the dusk of evening turned to the dark of night, I found it difficult to do anything but pray for those migrants caught every night in the waters of the Mediterranean, hoping against hope that “Europe is offering them life,” and praying that the Church will be Jesus to them.