The sun sets on 2015 at
the boating lake in Farmeligh 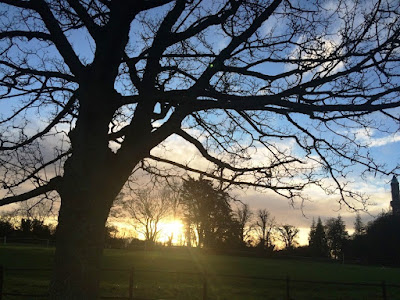 The sun sets on 2015 in Farmleigh late this afternoon (Photograph: Patrick Comerford, 2015)

This December has been the worst on record in Ireland, with six successive storms from A to F, and another storm and more heavy rainfalls predicted in the days to come. The Shannon, the Blackwater and the Slaney rivers continue to rise, many places in Ireland that were never flooded before are submerged tonight, and the risk of flooding remains severe in many places.

I think especially of places I know from my childhood and early adult days. At Cappoquin, the N72 Lismore to Dungarvan road was closed because of flooding.

In north Co Wexford, heavy floods have hit Enniscorthy and are threatening Bunclody.

The floods in Enniscorthy have closed Abbey Quay, Templeshannon Quay and Shannon Quay, Island Road is also closed and diversions are in place along the Coast Road. These floods have devastated homes and businesses in Enniscorthy, which is suffering the worst floods in recent memory.

The Quays are completely submerged, the underground car park at the Riverside Park Hotel was completely flooded as the river rose up to the door, and homes on Island Road were severely affected as the Slaney burst its banks.

It all made it impossible to get from one side of town to the other and roads are flooded right along the Slaney at Kilurin and Edermine.

The floods in Enniscorthy this week are far more severe than those that hit the town in November 2014. Ironically, a deal was signed last month on the long-awaited work on building a flood relief scheme in Enniscorthy, but this is not set to begin until later next year (2016). Many people in the town must be angry that the plans are not already being put in place.

In November, Wexford County Council appointed the design consultants Mott Mac Donald from Cork and Roughan and O’Donovan from Dublin to begin working on the detailed design of the scheme.

The scheme combines a number of measures to prevent flooding in Enniscorthy, including river channel widening, river deepening, bridge relocation, and building extensive glass panelled flood walls through the town.

The proposed works will cover a 3.5 km length of the River Slaney, stretching from 1.5 km upstream of Enniscorthy Bridge to 2 km downstream, finishing just south of the Riverside Park Hotel. It includes deepening of the riverbed beneath the present Railway Bridge and the Old Enniscorthy Bridge; building a new road bridge over the River Slaney and the Railway Line, about 100 metres south of the Riverside Park Hotel, removing the existing Seamus Rafter Bridge and building a new pedestrian bridge in the town centre.

Only a few weeks ago, Enniscorthy was basking in the glory and attention from the movie Brooklyn, based on Colm Toibín’s book, with many scenes filmed in the town.

These floods have been caused by strong winds, heavy rains and high tides – the Slaney is tidal as far upstream as Enniscorthy and the Blackwater as far as Lismore.

But why are these weather symptoms causing such devastation and wreaking such havoc this winter more than any previous winter?

Anyone who doubts climate change and its effects on the planet only needs to visit Ireland, northern England and Scotland this week to see the consequences of global warming and how it is churning up these storms in the mid-Atlantic.

But surely too it has been aggravated by allowing building and development on flood plains and unsuitable sites, with a detrimental knock-on effect. 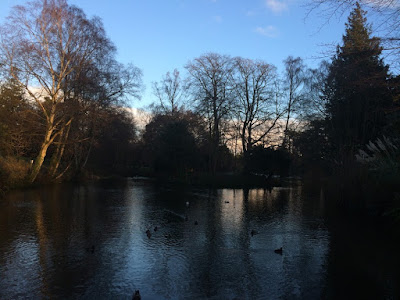 Tranquillity on the boating lake by the Boathouse Café in Farmleigh this afternoon (Photograph: Patrick Comerford, 2015)

I enjoy being by water – whether it is by the sea, on a beach, by a river bank, at a lake or on a canal bank. I said goodbye to 2015 this afternoon by water, but this time by the relative safety of the Boathouse Café, enjoying a double espresso by the boating lake in the grounds of Farmleigh, the official guesthouse for State visitors, on the edges of the Phoenix Park.

The Boathouse Café offers a stunning yet quiet haven close to Dublin’s city centre, and has been described as an “an Oasis of calm and tranquillity.”

I sat on the decking outside the café as the sun site on 2015. The setting sun to the west was casting beautiful lights across the ornamental lake and the surrounding woodlands. 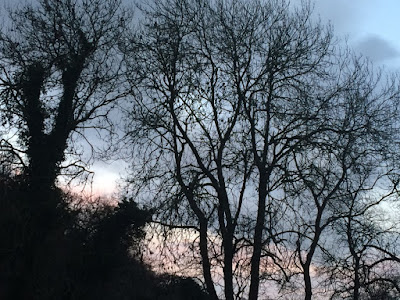 Silhouettes in the trees as Farmleigh in the hours before 2016 (Photograph: Patrick Comerford, 2015)

Posted by Patrick Comerford at 19:22