‘Visually the most striking timber-framed inn in the district’

The White Swan on the High Street in Hoddesdon … rated by Sir Nikolaus Pevsner as “visually the most striking timber-framed inn in the district” (Photograph: Patrick Comerford, 2012)

I took a short break from the USPG Conference in High Leigh this afternoon, and went for a stroll in the surrounding countryside before walking down Lord Street into Hoddesdon, to buy the Guardian in a little newsagent shop on the High Street and to read the paper next door over a glass of wine in the White Swan.

At the end of the 16th century, Hoddesdon had at least 30 inns, apart from alehouses and taverns that did not provide accommodation. A document from the 1590s names five of those inns: the Lyon, the Bell, the Chequers, the George and the Swanne.

Of those five, the Bell, the Chequers and the George no longer exist, the Swanne is now the White Swan, and the Lyon is now the Salisbury Arms, three or four doors further along the High Street.

In 1977, the architectural historian Sir Nikolaus Pevsner described the White Swan as “visually the most striking timber-framed inn in the district.”

Most of the building dates from the late 16th century, although part of the rear wing was added in the 19th century.

The White Swan was originally owned by the Sharnbrooke family, who owned other properties in Hoddesdon and Hailey. In 1600, it passed by marriage to John Bayley, and it has had a continuous story ever since.

The name of the pub was changed to the White Swan in the 20th century – although its National Heritage entry as a listed building describes it as “The Swan Inn.”

The White Swan is a mainly 16th century timber-framed building of five to six bays. It is plastered on the ground floor, and has an exposed half-timbered and plastered upper floor. The roof is Welsh and Westmoreland slate at the front roof, mostly old tile at the rear. The building has an L-plan, with a two-block rear wing on the south side, which is 16th and 17th on the east side and 19th century, single storey, weather-boarded on the west side. 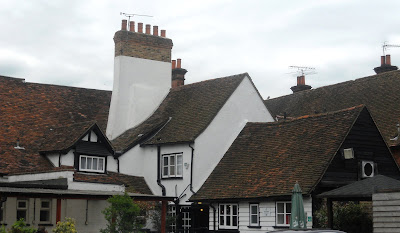 A view of the White Swan from the car park at the rear (Photograph: Patrick Comerford, 2012)

The six-window front elevation has a central, canted window bay on two wooden Tuscan columns with six four-light casements and along sign beam.

The closely-studded upper floor has some diagonal braces, the south side is jettied on moulded bressumer, the north side on bull-nosed joists.

The first floor sash windows are late 19th century, and there is a multi-pane shop front on the north side.

Inside, the building has chamfered and stopped floor beams and joists, the second bay from south with V-profile moulded beams.

The White Swan is the only pub in Hoddesdon listed as a grade 2* building, and with its beautiful and elegant Tudor architecture it fully deserves this status.

Posted by Patrick Comerford at 16:45