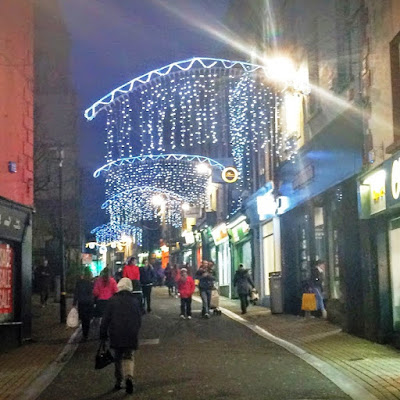 The Christmas lights were still on in the streets of Wexford last night. In the Bull Ring, the lights in the trees cast the Pikeman in dark relief against the blue of the night sky.

In North Main Street, they added a warm glow to the lights pouring out from Saint Iberius’s Church. And the few lights on High Street gave a mellow glow to the National Opera House (the former Theatre Royal), and the house opposite where I lived in the 1970s. 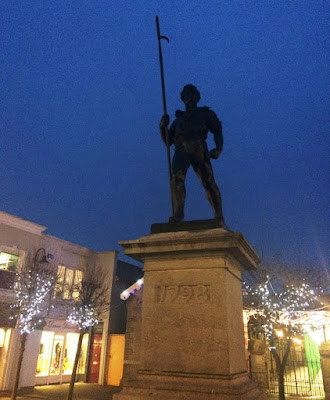 Christmas lights add to the glow around the Pikeman in the Bull Ring, Wexford, last night (Photograph: Patrick Comerford, 2016)

It is good to imagine that the lights are still on in Wexford not because no-one has organised taking them down but because things are done twice as well in Wexford and someone realises that Christmas continues into ‘Little Christmas’ and Epiphany.

The two ends of John Street were divided by the old water pump, and whether you were from above or below ‘the Cock’ determined your allegiance to football and hurling clubs. 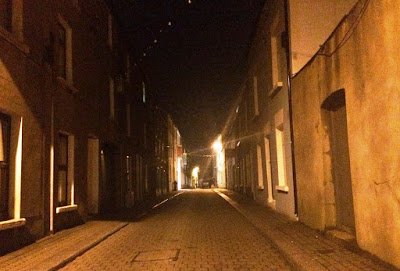 Many streets had two names at the time. In a fit of Nationalistic zeal, Wexford Corporation changed the names of many streets, without carrying out a plebiscite among the residents. And so, High Street was renamed McSweeney Street and Back Street became Mallin Street.

High Street is one of the historic, narrow streets within the walls of the old town. It runs from Rowe Street to Saint Patrick’s Square and Peter Street. Rowe Street links it to North Main Street, Allen Street and Keyser’s Lane link it South Main Street, and it is connected to School Street and Lower John Street through Mary Street.

During the 1920s, High Street was renamed McSweeney Street by the Borough Council. The change was rejected by the residents during a vote in the early 1930s, but the “new” name plates remained in place for decades.

Originally, High Street was actually called Upper Back Street and this name appears on maps dating back to the 1600s. By the early 19th century, it was still known as Back Street, but the opening of the Theatre Royal in January 1832 made it a more fashionable street so that by the late Victorian period, and certainly by 1883 it was called High Street.

Back Street remained the name of that part of the street that ran from the corner of Rowe Street, between the Methodist Church and Rowe Street to the corner of John’s Gate Street and Cornmarket.

When High Street was renamed McSweeney Street, Back Street became Mallin Street. The name Mallin Street remains, and the street has been graced in recent years with the new Library.

Eventually, reason, custom, common usage and a sense of history prevailed when it comes to High Street, the residents wishes have been respected, and the name High Street has been restored to the street signs.

But in mellow glows of the street lights and the remaining Christmas lights last night I noticed one graffiti artist has managed to scrawl his dissent in black paint below the street name. Perhaps he did not know how to spell either Sráid in Irish or Terence McSweeney’s name in Irish, perhaps he was disturbed in the lights, perhaps he never got further north than the …

Whatever his intentions, if daubing graffiti is how he wants to mark the centenary of 1916, he has little vision for respecting the full history of the town, and a story that goes back more than 100 years. 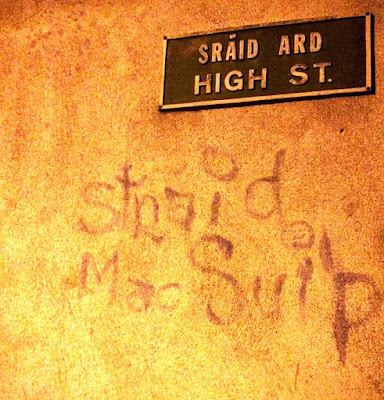 Posted by Patrick Comerford at 12:57