Winter rains down on the wet
harbours in Rush and Skerries 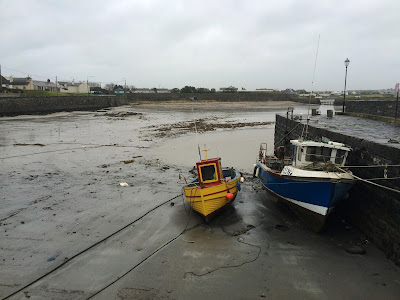 I am not sure for we are experiencing the tail of the snow storm that is beating the east coast of North America, but the weather turned stormy and cold this afternoon, and by the time two of us got to Rush in north Co Dublin, the rain was heavy and although the tide was out nobody was walking the small, crescent-shaped breach at the harbour.

I had been in Enniscorthy, Co Wexford, last night for the institution of the Revd Nicola Halford as the new Rector of Enniscorthy, and the moon was almost full in a clear sky above Enniscorthy Castle, with Vinegar Hill ethched in profile in the background.

The mild winter weather provided an opportunity to visit Saint Aidan’s Cathedral, which has been described as Pugin’s ‘Irish Gem’ and dinner in Alba, an Italian restaurant on Abbey Quay, with views down onto the banks of the fast-flowing River Slaney.

But we were reminded this afternoon that this is winter, and by the time I had gone for a walk on my own along the pier and the harbour I was soaked through with rain.

Two small fishing boats were tied up and almost stranded in the low tide, and the only sign of life was one or two people who bustled away swiftly. 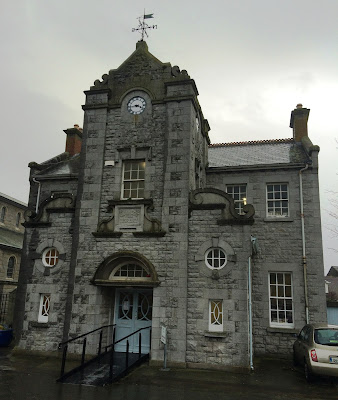 The Carnegie Library in the rain in Skerries this afternoon (Photograph: Patrick Comerford, 2016)

We moved on to Skerries, where we visited the Carnegie Library, which was designed by the architect Anthony Scott. Scott designed a number of the Carnegie libraries in Fingal – Rush, Malahide, Garristown, Lusk, Swords – as well as the library in Donabate, although that is not a Carnegie library.

Scott won the competition for Skerries in 1908, and the library was completed in 1911 and opened on 8 May. Malahide’s clock tower plan was rejected by Carnegie’s secretary, but as the library in Skerries was built without the plans being sent for approval, somehow, the façade got its centrepiece.

The street façade has five bays, with a clock tower rising as the centre bay, the lower storey also projecting the two flanking bays for the entrance, and the two outer bays stepped back on the ground floor, four outer bays stepped back on the first floor. The limestone is coursed and rusticated, with ashlar on the quoins and reveal quoins. There are S-scroll brackets on the transition between the clock tower and lower storeys, and to either side of the Carnegie plaque.

We had a late lunch in the Olive, which still serves the best double espresso in Fingal, before moving on to the Harbour.

The tide was still out, and the small sailing boats and ketches moored in the harbour looked lonely and abandoned in the pools of water on the damp sand.

One lonely walker stepped through the ripples and the pools. But it was wintery, it was cold and it was wet. I stayed in the car, and we drove around Red Island before returning home. 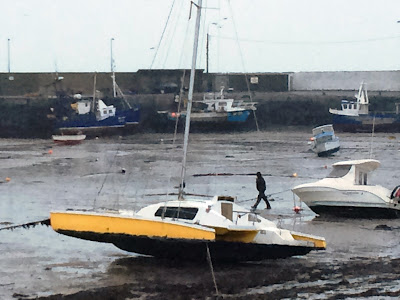 Walking alone on the side in the harbour in Skerries while the tide was out this afternoon (Photograph: Patrick Comerford, 2016)

Posted by Patrick Comerford at 21:38