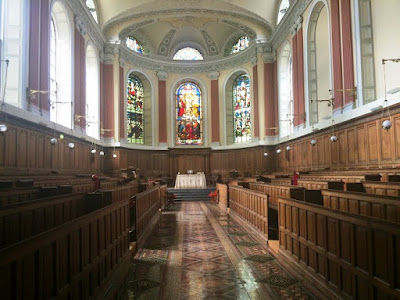 Today is Saint Patrick’s Day [17 March 2016], and it is worth recalling that Samuel Johnson is forever known as ‘Doctor Johnson’ because of the honorary doctorate he received from the University of Dublin (Trinity College Dublin) over 250 years ago in 1765.

Johnson was a close friend of the Irish-born politician Edmund Burke (1729-1797), who was educated at Trinity College Dublin, but they strongly disagreed with each other on their political views. According to his biographer James Boswell, Johnson once said of Burke:

In private life he is a very honest gentleman; but I will not allow him to be so in publick life. People may be honest, though they are doing wrong; that is between their Maker and them. But we, who are suffering by their pernicious conduct, are to destroy them. We are sure that [Burke] acts from interest. We know what his genuine principles were. They who allow their passions to confound the distinctions between right and wrong, are criminal. They may be convinced; but they have not come honestly by their conviction.

Johnson’s other Irish friends in London included Oliver Goldsmith, Arthur Murphy, Charles O’Connor, Bishop Thomas Percy of Dromore and Bishop Thomas Barnard of Killaloe, and in a curious accident of history the papers of his biographer, James Boswell, were eventually found in Malahide Castle, Co Dublin.

In his Life of Johnson, Boswell, records Johnson as having famously said on one occasion:

The Irish are not in a conspiracy to cheat the world by false representations of the merits of their countrymen. No, Sir; the Irish are a fair people; – they never speak well of one another.

But what did Johnson truly think of Ireland? Boswell recalls Johnson once saying during a conversation with an Irishman on the state of Irish politics:

The Irish are in a most unnatural state; for we see there the minority prevailing over the majority. There is no instance, even in the ten persecutions, of such severity as that which the protestants of Ireland have exercised against the Catholicks. Did we tell them we have conquered them, it would be above board: to punish them by confiscation and other penalties, as rebels, was monstrous injustice.

I have long wished that the Irish literature were cultivated. Ireland is known by tradition to have been once the seat of piety and learning; and surely it would be very acceptable to all those who are curious either in the original of nations, or the affinities of languages, to be further informed of the revolution of a people so ancient, and once so illustrious.