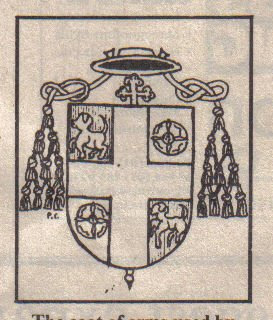 The past week has shown how once again it’s fashionable to be Irish in France. The Wild Geese are no longer poor refugees but affluent aristocrats. But as many an Irish family knows, it was not always so. In 1651, Patrick Comerford sailed for France as a refugee from Waterford. Twice, before the ship reached Brittany, it was plundered by pirates, and two of his nephews, Paul Carew and John Fitzgerald, died of plague. Within a year, Patrick had died too, and following his death on March 10th, 1652, he was interred in the episcopal vault in Nantes Cathedral. When the vault was opened again in 1659 for the burial of Robert Barry, Bishop of Cork, according to a contemporary account, “the body of Dr Comerford was found quite incorrupt”.

Comerford was born in Waterford in 1586 into a family that had supplied mayors and sheriffs of the city for generations. Three of his Comerford cousins, Richard, James and Thomas, were Jesuits, while a fourth, the Rev Thomas Comerford, was Rector of The Rower in south Co Kilkenny – a form of family ecumenism that was not uncommon at the time, but had little appeal to Patrick Comerford in later life.

After schooling in Kilkenny and Waterford, he left for France at the age of 17 and studied theology in Bordeaux, and later at Lisbon and Coimbra, before receiving his doctorate in Florence.

While he was a young priest in Spain, his brother was captured by pirates and taken to Morocco. Comerford collected the ransom among his friends, and headed off to purchase his brother's freedom. But by the time he reached Spain he heard good news and bad news: his brother had been released, but on landing in Spain had died of the plague. The young Augustinian used the ransom to procure the release of 100 slaves held by the Moors.

For a time, Patrick was a professor of theology in both Terceiro and Brussels, but he soon moved to Rome, where another cousin and former schoolmate, the Franciscan Luke Wad ding, had founded St Isidore’s and held the grand title of Qualificator of the Holy Office.

The Diocese of Waterford and Lismore had been without a Roman Catholic bishop since 1578, but following a petition from the clergy of the diocese in 1629, Patrick Comerford was appointed bishop, probably through the influence of Luke Wadding. He was consecrated by Cardinal Bentivoglio in the Church of St Sylvester on the Quirinal in Rome on March 18th, 1629, and sailed for Waterford soon after. Copies of an address of congratulations presented by the staff and of the infant Irish College, founded the previous year, still survive, in the National Library and in the Franciscan Archives in Dublin.

Back in Ireland, Comerford held strong ecclesiastical influence throughout the south east, controlling many church appointments in his own diocese and in the neighbouring counties of Kilkenny and Wexford. He was involved in the effort to re-establish monastic foundations abolished during the Reformation, and held the office of Prior of Kells, Co Kilkenny, although it was no longer an Augustinian foundation.

Patrick Everard, a Waterford Cistercian who had been appointed Abbot of Dunbrody by Pope Urban VIII, was given that appointment by Bishop Comerford. However, it is unlikely that Everard managed to take physical possession of Dunbrody – it remained in the hands of the Etchingham family, and Everard served out his days as parish priest of Ballyhack and died of the plague at Duncannon.

As bishop of Waterford and Lismore, Comerford took part in the episcopal conferences and synods called in Kilkenny in support of the Confederation and presided over by David Rot he, Bishop of Ossory.

When Waterford fell to Cromwell, Comerford set sail for France, never to return. His diocese remained vacant for 18 years after his death.

Patrick Comerford appears to have been a well-dressed bishop. In 1637, an Order in Council required the Mayor of Waterford to restore to the Church of Ireland dean and chapter of Christ Church Cathedral “certain copes and vestments, which he had in his custody” – he appears to have been holding them for Comerford’s use. These included five copes and a set including a chasuble, dalmatic and tunicle with sides and maniples – enough to turn out any High Church bishop in style.

The copes and vestments were never returned, however, and Comerford’s successor John Brenan (1671-1693), complained unfairly that the ecclesiastical ornaments of the diocese had been taken away to France by Comerford in 1651. The church finery disappeared for generations, but were literally unearthed when Bishop Richard Chenevix ordered the demolition of Christ Church so the city could be graced with a new Church of Ireland cathedral. During demolition work between 1774 and 1779, the missing vestments were discovered in the crypt. The low church Chenevix was on such good terms with his Roman Catholic counterpart that he presented them to Bishop William Egan, and they can now be seen in the National Museum.

Over a century after Patrick Comerford’s death, a new spirit of ecumenism was in the air in Waterford. Egan was pleased with the vestments, and he also delighted in the new cathedral commissioned by Chenevix. In fact, he was so pleased, he also asked the same architect, John Roberts (1714-1796), to design him a new cathedral in Barron Strand Street, now the oldest Roman Catholic cathedral in Ireland.

A day to remember

All this ecumenical co-operation might have made Patrick Comerford’s “quite incorrupt body” turn in his episcopal vault. After all, he had been known in his lifetime as malleus haereticus, the “hammer of the heretics”.

But if he was less than ecumenical by today's standards, we might credit him with some part in ensuring a wider celebration of Saint Patrick’s Day on March 17th. He chose March 18th as the day for his consecration as a bishop, and it may have been through his influence that Luke Wadding had the feast of Saint Patrick inserted in the Roman Calendar for March 17th and made a feast of the Universal Church.