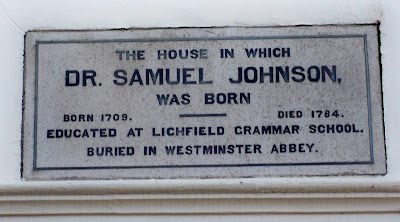 A sign marking the house in Lichfield where Samuel Johnson was born in 1709 (Photograph: Patrick Comerford)

In an essay in The Adventurer, No 24 (25 August 1753), Samuel Johnson questions the view commonly held at the time “that England affords a greater variety of characters than the rest of the world. This is ascribed to the liberty prevailing amongst us, which gives every man the privilege of being wise or foolish his own way, and preserves him from the necessity of hypocrisy or the servility of imitation.”

He describes taking a stagecoach journey across England, when was confined to a small space with strangers who did not know one another and who were reluctant to engage freely in conversation with each another. He observes:

How readily the predominant passion snatches an interval of liberty, and how fast it expands itself when the weight of restraint is taken away, I had lately the opportunity to discover, as I took a journey into the country …

It is always observable that silence propagates itself, and that the longer talk has been suspended, the more difficult it is to find anything to say.

Is silence induced by travel in a confined space? The train from Wexford to Rosslare Harbour (Photograph: Patrick Comerford)