Ashlin’s church in Rathfarnham
is part of the Pugin tradition 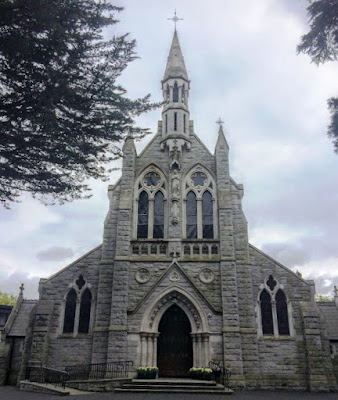 On my way home from work one evening this week, I stopped to take time and look at the Church of the Annunciation in Rathfarnham.

I have been in this church in the past for weddings and funerals, my parents and other members of my family have lived nearby, and I was born with a few hundred metres of this church. However, I had never paid much attention to its architectural beauty, nor had I paid much attention to this as an important church in the Gothic Revival in Irish church architecture and its place in the tradition and heritage of the Pugin school of architecture.

This striking Gothic Revival church was designed by AWN Pugin’s son-in-law, George Coppinger Ashlin (1837-1921), and retains many of the fine internal and external features typical of his style of work.

This is a landmark Gothic Revival church, on a prominent position on the edge of Rathfarnham village, and it dates from 1875. It stands on the junction of Grange Road and Willbrook Road, opposite the Yellow House public house. 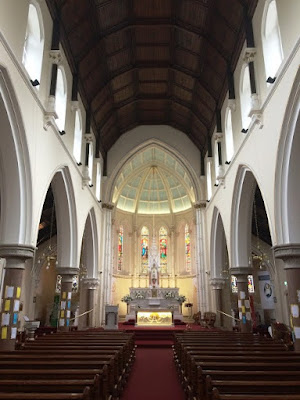 Ashlin designed this church in the Early French Gothic style with a five-bay nave, with flanking side aisles below clerestory windows and a chancel terminating in the semi-circular apse at the liturgical east (south side).

There is a single-storey vestry to the south (actual west) side. The church has snecked rock-faced granite walls. There are pointed arched windows throughout the church, paired to the aisles.

There are angle buttresses to the west (north) entrance front framing the pointed doorway and with a carved stone surround. There are two large pointed openings above, each housing a pentafoil (five-leaved) roundel above the paired windows. There is an octagonal bellcote to the gable. The church has a pitched, two-tone slate roof. 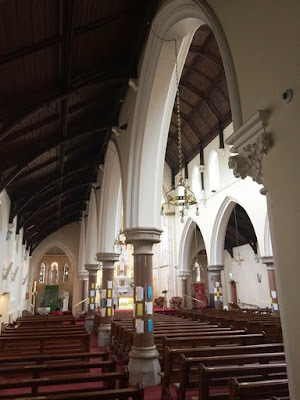 The church has flanking side aisles below clerestory windows (Photograph: Patrick Comerford, 2016)

Inside, the church has a series of colourful, stained glass windows made in France and illustrating the Stations of the Cross and ornate interior plasterwork.

Outside, there are carved granite gate piers, and cast-iron gates and railings. A font beside the main door is said to date from Penal times.

Cardinal Paul Cullen laid the foundation stone of the church by on 29 March 1875, and the church was dedicated 27 March 1878 by Monsignor McCabe. 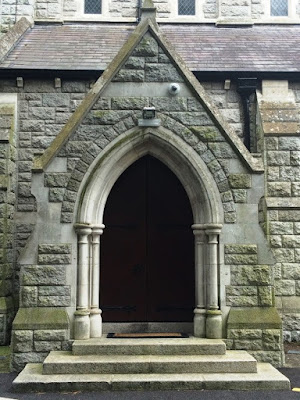 The south porch at the Church of the Annunciation, Rathfarnham (Photograph: Patrick Comerford, 2016)

Ashlin was born in Carrigrenane House on 28 May 1837 and was educated at the College of St Servais, Liège, and at Oscott College, near Birmingham (1851-1855).

In 1856, he became a pupil of AWN Pugin’s son, Edward Welby Pugin, first in Birmingham and then in London, and from 1858 until 1860 he was also a student at the Royal Academy.

When Ashlin was taken into partnership with Pugin, he was responsible for setting up a Dublin branch of the practice and taking charge of the Irish commissions, which included the large new church of Saint Peter and Saint Paul in Cork.

By 1861, Ashlin had opened the office of Pugin and Ashlin at 90 Saint Stephen’s Green. Many commissions followed, most of them for churches, convents and monasteries throughout Ireland, including Saint Colman’s Cathedral, Cobh (Queenstown), Co Cork and the Augustinian church of Saint Augustine and Saint John, Thomas Street, Dublin.

The partnership of Pugin and Ashlin was dissolved in 1868, but Ashlin had married Edward Pugin’s younger sister Mary Pugin (1844-1933) a year earlier in 1867, and the family ties remained close. Ashlin was in partnership with his brothers-in-law, Peter Paul Pugin and Cuthbert Pugin, from 1875 to about 1880, but continued to work under his own name in Ireland with a highly successful practice.

In 1903, Ashlin invited his former pupil and office manager, Thomas Aloysius Coleman (1865-1950), to join him in the new partnership of Ashlin and Coleman. Thomas A Coleman (1865-1950), the architect, of Ashlin and Coleman, was born at 61 Lower Clanbrassil Street in 1865 while his parents, John Coleman and Mary (White) Coleman, lived there. His first cousin, Francis Coleman, married my grandfather’s eldest sister, my great aunt Mary Comerford, in 1889.

Ashlin played an active role in the architectural profession, as president of the RIAI (1902-1904) and as assessor in many competitions, including Saint Peter’s Catholic Church, Drogheda (1883), Newry Town Hall, Co Down (1890), and the Carnegie Library, Dun Laoghaire (1910).

Ashlin was remembered as a tall, commanding figure with “an appearance of distinction.” Each morning, he caught a fast train from Killiney to Westland Row and walked from the station to his office at 7 Dawson Street. 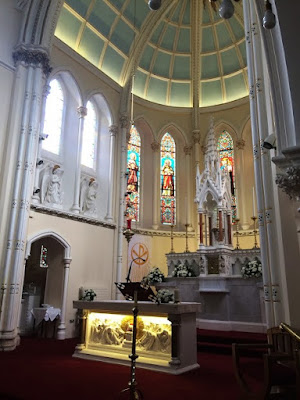 The High Altar in marble and Caen stone was the work of the Dublin sculptors Farrell and Sons (Photograph: Patrick Comerford, 2016)

The church was built by Michael Meade & Son at an estimated cost of £5,793.

Pearse died suddenly in 1900 in Birmingham while he was visiting his brother, and his practice was continued for some years by his son William Pearse, with the support of the other son, Patrick Henry Pearse. Both brothers were executed in the aftermath of the 1916 Rising, but while Patrick Pearse ran a school nearby at Saint Enda’s in Rathfarnham, there is no evidence that they had any connections with the church in Rathfarnham. 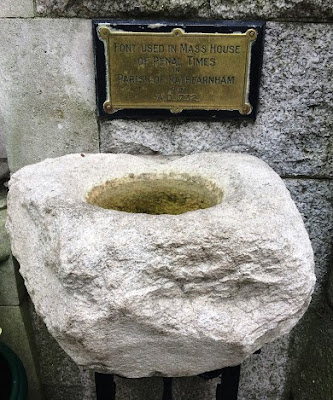 A font beside the main door is said to date from Penal times (Photograph: Patrick Comerford, 2016)

Posted by Patrick Comerford at 21:03

Great piece about this beautiful church in Rathfarnham