A summer afternoon in the green
and golden fields in Comberford

The beauty of the Staffordshire countryside at Comberford Manor farm (Photograph: Patrick Comerford, 2016; click on image for full-screen view)

There is something in summer that makes the English countryside unique and impossible to match. I stayed overnight in the Hedgehog Vintage Inn, on the northern fringes of Lichfield, with a room looking out over the rolling countryside of South Staffordshire.

I am on my way to the residential meeting of the trustees and council of the Anglican mission agency USPG in Swanwick, Derbyshire, and after attending the Cathedral Eucharist in Lichfield Cathedral on Sunday morning [5 June 2016] I decided to take a long walk through the countryside between Lichfield and Tamworth.

It might be wrong to even describe Comberford as a village. It has no shop, it has no post office, it has no pub, and the small church was closed a few years ago to the dismay of many of the people who live in Comberford.

But this place has the feeling of ancestral heartland, and its landscape has called out to generations of my family, even if there have been misunderstandings in the past about the family’s origins and where the family came from.

I first visited Comberford almost 50 years ago, in 1970. But there is no reason for outsiders to want to visit Comberford. It is rural England at its best, but it is nowhere. The road north from Tamworth leads on to Elford and Burton on Trent, but you have to want to go to Comberford to get there.

And even then, the directions can be distracting. 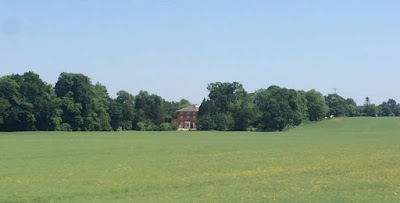 Comberford Hall seen in the summer sunshine this afternoon, with lands sweeping down to the banks of the River Tame (Photograph: Patrick Comerford, 2016)

The first indication – although there is no signpost – that you have reached Comberford is the driveway leading up to Comberford Hall, the ancestral home of the Comberford family that my great-grandfather visited over a century ago, while the Peel family were living there.

Today, Comberford Hall is gated and inaccessible. The few neighbouring houses clustered around it are part of a centuries-old complex, but they are isolated from the rest of the village. 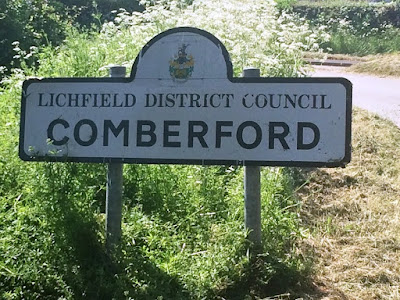 About half a mile further north, a smallsign indicates that Comberford itself is a little to the west off the main road, squeezed between the road to Elford on one hand, and the railway line and the River Tame on the other.

In the beautiful, warm, sunny, Sunday afternoon sunshine, I made my way down Tollgate Lane to Comberford itself. It is such a small part of Lichfield District that it is not an administrative unit in itself – it is a part of Wigginton and Hopwas.

On Sunday afternoon, people were out washing their cars, cutting their lawns, or basking in the sunshine. 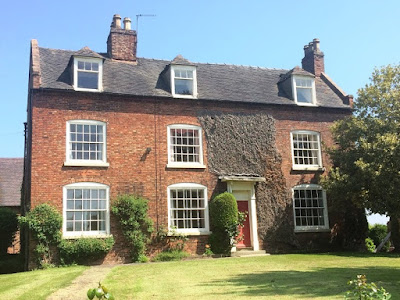 Comberford Manor farmhouse … built perhaps on the site of the original home of the Comberford family (Photograph: Patrick Comerford, 2016)

After walking around the deserted and desolate abandoned Church of Saint Mary and Saint George, and spending a little time in Comberford Millennium Green, I walked to the end of Manor Lane, where Comberford Manor farmhouse may be the original heart of the Comberford estate, and still stands at the centre of the principal farming activities in Comberford.

The house looks out onto fields and farmland, with the railway line and the River Tame within view. 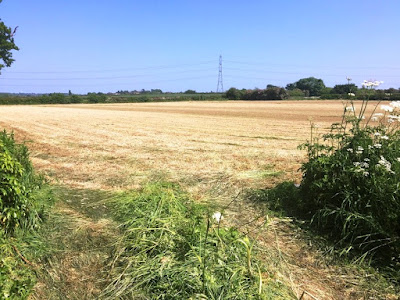 The green and golden fields at Comberford in summer sunshine (Photograph: Patrick Comerford, 2016)

One of the unique aspects of the countryside in England is the way in which footpaths are marked out for the rambler, the stroller and the walker. I walked through acre after acre of green and yellow countryside, along clearly marked footpaths, without meeting anyone. There was no-one to ask me my name, who I was, or what I was doing walking through this green-and-gold open countryside. 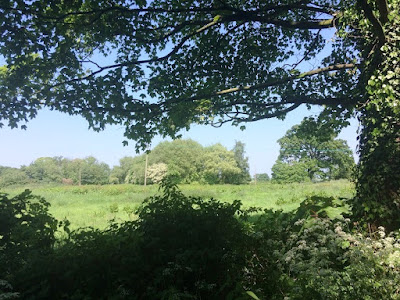 Walking through the fields and farmland at Comberford (Photograph: Patrick Comerford, 2016)

I have walked through this landscape countless times since I was a teenager. And on Sunday afternoon the only sounds I could hear were birdsong and trains in the distance running between Tamworth and Lichfield Trent Valley. 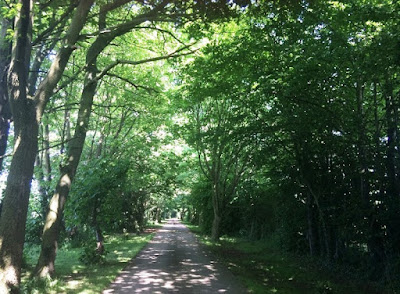 It was hard to leave such inviting terrain. Eventually, I walked back down the drive at Comberford Hall, and walked along the main road, past Orchard Cottage and back to Tollgate Lane, half a mile from Comberford village.

There is something in the soul and the heart that calls us back not just to ancestral places with their buildings and the houses with which we share names, but to the soil itself, the open fields, the trees and shrubs and the landscape. And it is easier to answer that call when the sun is shining and we return weather-beaten from the very soil that nurtured our ancestors. 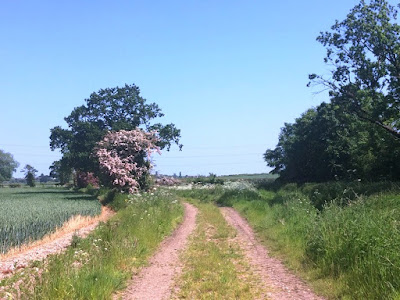 The soil and the landscape call us back and back again (Photograph: Patrick Comerford, 2016)

Surely it is the Tame not the Trent, which does not join the Tame till about 5 miles towards Burton !

You are right, absolutely. A slip of the tongue, or the fingers on the keyboard. Thank you. Correction made, Patrick

Hi Patrick
My husband has just inherited Orchard Cottage from his father in February 2017, You mention the cottage a few times and wonder if you have more information on it.
We intend to keep the cottage and are trying to do a history of the house. We cannot find out how old it is. We do not know who owned the land before the cottage was built but believe there was once another building on the land called Orchard House.
We would think that the comberford family would have owned the land in the fist place bt wondered if we could find any information as to when the land was sold/purchased.
Can you help?
Kind regards
Katrina

I have a few other references to Orchard Cottage in this posting: http://www.patrickcomerford.com/2016/06/comberford-village-is-secluded-and-has.html

Have you tried the library in Tamworth, which has very good sources for local history, including many historic directories that list previous residents, and would help you track previous residents in the electoral rolls. Of course the land was previously owned by the Comberford family, but only until the 1660s.

It is a delightful house, and in a beautiful part of the countryside. If these suggestions fail to produce satisfactory results, please get back in touch with me.

You can always private message me through my Facebook page.