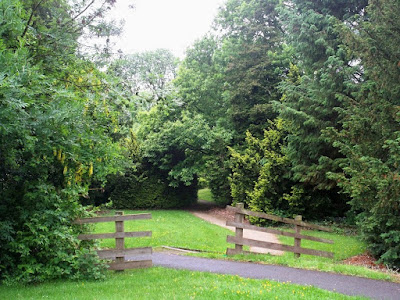 The Derbyshire countryside in the middle of England … not as bleak as the Guardian feature on Ripley may imply (Photograph: Patrick Comerford)

The United Kingdom goes to the polls in about two weeks’ time [23 June 2016] to determine whether to remain in the European Union or to leave. And as Britain debates its European identity, and as England debates its English identity, I have found myself right in the middle of England.

I am spending these three days at a conference in the Hayes Conference Centre in Swanwick, near Alfreton, and I am less than two miles from Ripley, the Derbyshire town that was recently named by the Guardian as the “most English town” in England.

I passed by Ripley earlier in the day on my journey between Lichfield and Alfreton. According to the Guardian, a study by the University College London – admittedly carried out a decade ago – found that Ripley was the “most English” place in England.

The weekend feature, published on Saint George’s Day [23 April 2016], said Ripley is “smack bang in the middle of the country,” and has the highest proportion of residents with English ethnic origins – 88.6% – with nearby Heanor, also in the Amber Valley district of Derbyshire, not far behind.

The Guardian feature-writer wrote: “What makes the Amber Valley, wedged between Derby and Nottingham, such a hotbed of Englishness is a bit of a mystery – but don’t come expecting ye olde Morris dancers and chocolate box mead drinkers. This is the kind of quintessential England not found in tourist brochures.”

The Guardian’s research was criticised online by one reader who remarked: “You obviously have never heard of either of the two Morris Dancing teams from Ripley … Ripley Morris Men and Ripley Green Garters … So yes you really should expect to see Morris dancers lol do you (sic) research properly LOL!”

The Guardian writer urged readers to “think instead of redbrick terraces, suburban piles with pillars and electric gates, smashing chippies, 1920s semis, the odd tearoom, a Premier Inn, Lidl, Wilko and Wetherspoons, and a Friday night out that’s a sight to behold. This is not Downton Abbey (though Newstead Abbey isn’t far away). Ripley is ordinary England, in the best sense of the word.”

That may have been complimnary, in a back-handed kind of way. But, perhaps with an eye to Ripley’s reputation in the best for being home to a number of supporters of far-right and racist groups, the Guardian writer warned: “If [you] want cosmopolitan, you’re in the wrong place, though there is a Chinese [takeaway].”

A reader of the local newspaper, the Derby Telegraph, thought the Guardian had held back on the dark side of “Englishness,” with “a whole swathe of former Derbyshire and Notts coalfield badlands having sickening links with racially prejudiced pseudo-organisations.”

He recalled a television documentary in the 1980s or 1990s showing the terror inflicted on local shopkeepers in Heanor and neighbouring Langley Mill “for daring to be non-white.”

The nearest train station to Ripley is 10 minutes away at Alfreton, where I arrived this afternoon. From there, there are half-hourly trains to Sheffield (30 minutes) and Nottingham (20-30 minutes), and Ripley is 15 minutes to the M1, and half an hour from the Peak District, Nottingham and Derby.

One Ripley resident told the Guardian: “It’s an affordable place to live, with great access to the Peak District’s beautiful, wild scenery. Worst things: social/economical problems due to unemployment and poor opportunities.”

Another said: “It has always had a rough reputation. But it’s friendly, except on a Friday night when it’s best to keep your children away from the centre.”

Needless to say, I was much happier with how the Guardian described Lichfield back in 2007:

“The birthplace of Samuel Johnson is, as you’d expect from such a noble son, a ribald old place, as round, full-bodied and comforting as a steak and ale pie - and one that seems perfectly content to remain in its 18th-century heyday. The age of Asbos and iPhones seems curiously out of place on the gentle cathedral close. But, alas, Lichfield finds itself at Britain’s crossroads, blessed and cursed by handy commuter roads such as the M6, making it a tempting jewel for Birmingham commuters after a better price and all the advantages of a cathedral city. The cathedral, with its magnificent three spires. A distinctly provincial air.”