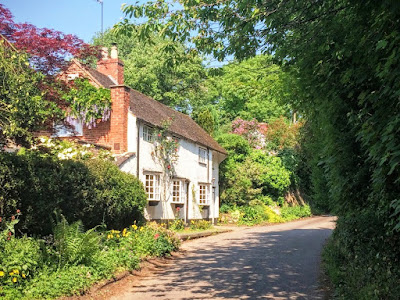 Setting out on a morning walk along Cross in Hand Lane, on the edges of Lichfield (Photograph: Patrick Comerford, 2016)

My treks through the English countryside continued yesterday morning [6 June 2016], with a good brisk walk along Cross in Hand Lane, which starts at the back of the Hedgehog Vintage Inn, where I was staying for the weekend. 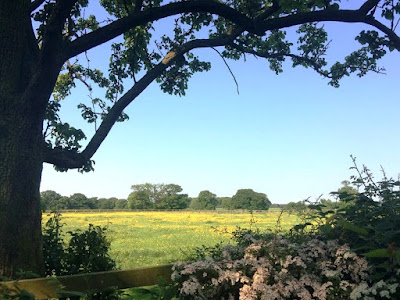 Little has been altered in the landscape along this pilgrim route for centuries (Photograph: Patrick Comerford, 2016)

Today, this pilgrim route is marked out as the Two Saints’ Way. And little has change has taken place in the landscape along this route since mediaeval times. The road twists and turns, rises and falls, with countryside that has changed little over the centuries.

On Monday morning, the fields were green and golden under the clear blue skies of summer. There are horses in paddocks here, or cows there, and most of the land is arable or being used for grazing.

The window cleaner at one cottage called out a cherry morning greeting, and there was a warm hello from one farmer in his farmyard. The occasional car or van passed by slowing down to acknowledge my presence on the narrow lane, I met one other walker and two cyclists. All offered a cherry greeting or an acknowledgment, and twice, complete strangers offered a lift. Otherwise, the only sounds were birdsong, the humming of the English countryside, and a babbling brook.

Although farming patterns have changed in the last 30 years or so, these fields may not have changed in shape or altered in their use for centuries, and even the names on new-built houses can reflect names that date back to a period in the 12th to 14th century. 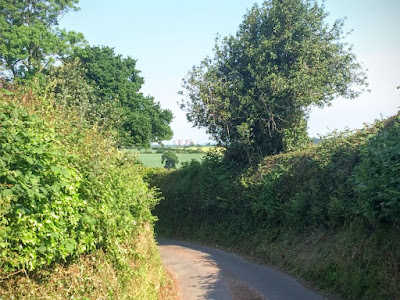 A distant glimpse of the towers of Rugeley Power Station (Photograph: Patrick Comerford, 2016)

Apart from the occasional passing car or van, one other walker and two cyclists, the only hints of modernity are the overhead pylons, the smoking towers of the power station in Rugeley that can be glimpsed in the distance, and the odd tiny shard of glass here and there where a wing mirror must have been brushed as two cars tried to pass each other on the rutted laneway.

Often as priests, we think we should be filling the silent spaces in time with intense prayers and thoughts about sermons and services that need preparation. But sometimes we need to just let go and empty our minds, or thoughts – even our prayers. We take everything else to be recycled as we clear out spaces in our houses, our offices and our studies. But we seldom give time to clearing out the clutter in our inner spiritual spaces, allowing them to benefit from recycling.

This morning walk was an opportunity to clear out this cobwebbed corners of my brain and (hopefully) my soul, and to allow myself time to enjoy this walk as this walk and as nothing more. 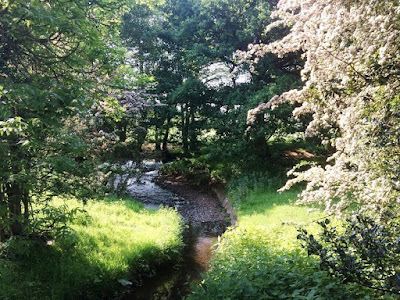 Stopping to listen to a babbling brook (Photograph: Patrick Comerford, 2016)

I stopped to admire the shapes and patterns of the fields and the trees. I stopped in silence at the babbling brook. I stopped to look at Farewell Mill. The local historian Kate Gomez suggests the name has nothing to do with saying goodbye and points out that the alternative spelling of ‘Fairwell’ refers to a nearby ‘fair or clear spring.’

Eventually, at the top of Cross in Hand Lane, I had reached Farewell, about 2½ or three miles north-west of Lichfield.

I stopped briefly to look at Farewell Hall, and wondered about its history, before making my way down the path to Saint Bartholomew’s Church. 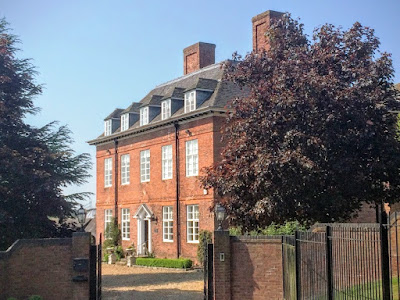 Farewell Hall, on the brow of a hill above the church in Farewell (Photograph: Patrick Comerford, 2016)

The story of this country parish church dates back to a small Benedictine nunnery was founded here by Bishop Clinton of Lichfield ca 1140.

The Priory of Farewell was founded at Farewell, 2½ miles north-west of Lichfield, by Roger de Clinton (1129-1148), Bishop of Lichfield and Coventry, (1129-1148), who endowed the place with several episcopal estates. Bishop Roger’s original grant gave to the church of Saint Mary at Farewell and the canons and lay brothers there the site of the church and important tracts of neighbouring land. 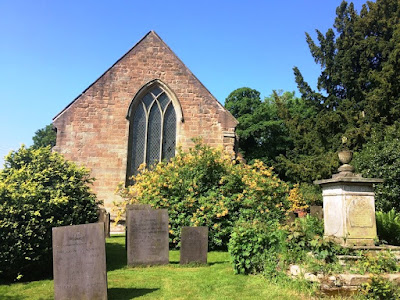 The East End of the church in Farewell retains parts of the priory church (Photograph: Patrick Comerford, 2016) 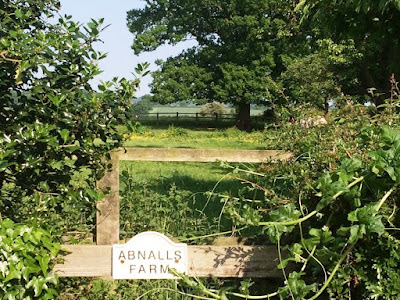 Abnalls Farm … a name that dates back to priory lands in the 13th century (Photograph: Patrick Comerford, 2016)

But, as the nunnery prospered, all was not well in Farewell. Reports from 14th-century episcopal visitations found incidents of nuns left the nunnery and put aside their habit, that nuns were sleeping two in a bed and with young girls in their beds.

The bishops’ reports recommended that no secular women over 12 years of age were to live in the house unless they were going to become nuns, and only women of good fame and honest conversation were to be employed. Indeed, the door at the back of the garden leading to the fields was to be kept locked because of several scandals. 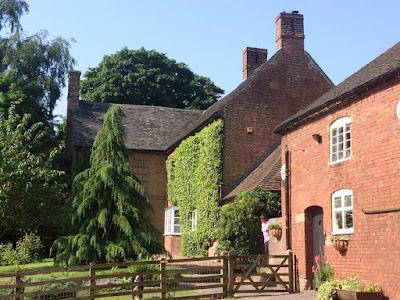 Farewell itself is small, and covers only 1,049 acres. A mile further on is the small village of Chorley, so the church in Farewell is not the focal point of village life. Today Farewell and Chorley form a civil parish, but the parish council is a joint one with Curborough and Elmhurst, all within Lichfield District.

I could have spent all the morning here. But I made my way back to the Hedgehog and Lichfield along this mediaeval pilgrim route. I had a train to catch for the opening of the annual residential conference of the Anglican Mission agency, USPG, which I am taking part in this week at the Hayes Conference Centre in Swanwick, Derbyshire. 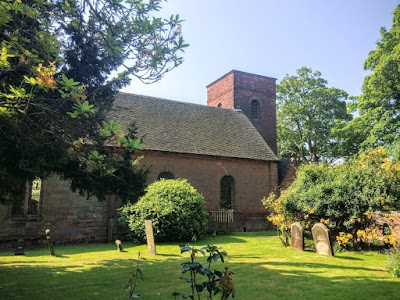 It's interesting that both the "final" churches on the pilgrimage routes to the shrine of St Chad were sites of ancient springs. From the north, you found "Our Lady's Well" - the Fair Well, corrupted into Farewell. Coming from the south and east, along Watling Street, pilgrims would have stopped at the small church, formerly a priory, at Hints.
Both churches were rededicated to St Bartholomew after the Reformation. I wonder why? Both were extensively rebuilt.