A weekend wedding at an old
country estate in Co Carlow 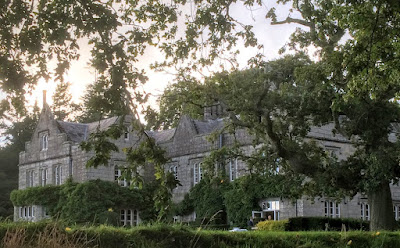 Lisnavagh House, on the edges of Rathvilly, Co Carlow, is the family seat of Lord Rathdonnell and an interesting wedding venue (Photograph: Patrick Comerford, 2016)

Throughout the past week, I have been writing about the architectural heritage of Carlow Town. Following my visit to Carlow last Saturday [10 September 2016], I have been writing this week about Carlow’s neo-classical courthouse, the shared stories of the town’s Methodist and Presbyterian churches, and the Assembly Rooms, which were part of George Bernard Shaw’s generous property bequests to the people of Carlow.

I am back in Carlow again this weekend for a short visit before returning to a demanding and busy working weekend in Dublin. I was at a family wedding in Donard, Co Wicklow, yesterday and then went on to the reception in Lisnavagh, before staying last night in the Mount Wolseley Hotel on the outskirts of Tullow, Co Carlow. 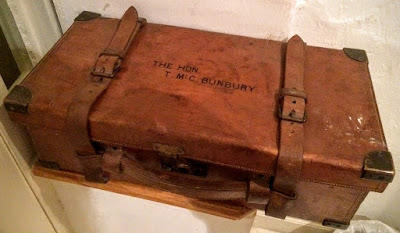 The Bunbury family moved to Co Carlow in the 1660s (Photograph: Patrick Comerford, 2016)

The Lisnavagh Estate, on the edges of the village of Rathvilly in Co Carlow, is the family seat of the McClintock-Bunbury family who hold the title of Baron Rathdonnell.

The Bunbury family claims descent from a Baron de St Pierre, a Norman knight who fought under William the Conqueror at the Battle of Hastings in 1066. This branch of the Bunbury family left Cheshire in the 1660s and moved to Co Carlow as tenants of the Duke of Ormonde until they bought Lisnavagh in 1702.

Lisnavagh House is thought to have been first built by William Bunbury in 1696 (Photograph: Patrick Comerford, 2016)

The first known house at Lisnavagh is thought to have been built by William Bunbury in 1696 in the parklands below the present house. A map from the 1840 Ordnance Survey shows the location of this house, with its grounds and buildings, but there is little else to tell what sort of a house this was.

In 1847, Captain William McClintock-Bunbury commissioned Daniel Robertson to build a ‘new house’ at Lisnavagh. Robertson had already completed designs for Powerscourt Estate, Co Wicklow, and Johnstown Castle, Co Wexford, and Lisnavagh may have been one of his last major designs. Robertson designed his new house in the Gothic Revival style, and also designed the gardens and pleasure grounds, as well as the farmyard about a mile away.

The title of Baron Rathdonnell, of Rathdonnell in the County of Donegal, was given in 1868 to John McClintock (1798–1879) of Drumcar, Co Louth, an uncle of the Arctic explorer, Admiral Sir Francis Leopold McClintock. Lord Rathdonnell was a former Serjeant at Arms in the Irish House of Commons, High Sheriff of Co Louth (1840) MP for Co Louth (1857-1859), and Lord Lieutenant of Co Louth (1867–1879). The Rathdonnell title was the second-last barony created in the Peerage of Ireland, and is named after the townland of Rathdonnell, near the village of Trentagh, just north-west of Letterkenny.

An unusual condition was that the title was to descend to the male children and descendants of Lord Rathdonnell’s deceased younger brother, Captain William McClintock-Bunbury of Rathvilly, who had been MP Co Carlow.

In 1879, Lord Rathdonnell was succeeded according to the special remainder by his nephew, Thomas Kane McClintock-Bunbury (1848–1929), 2nd Baron Rathdonnell. By 1860, he had turned his estate at Lisnavagh into one of the most advanced and efficient farms in Ireland. He sat in the House of Lords as an Irish Representative Peer from 1889 to 1929. He was Lord Lieutenant of Co Carlow from 1890 to 1929.

The present holder of the family title, Thomas Benjamin McClintock-Bunbury, was born in 1938 and succeeded his father as the 5th Baron Rathdonnell (in 1959. 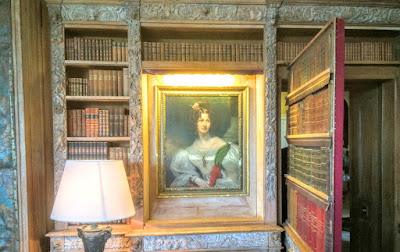 Meanwhile, in 1952, about two-thirds of the house was taken down and the house was remodelled to take account of the significant reduction in house staff and the poor financial outlook at the time. Electricity was also introduced to the house at this time. The pleasure grounds and gardens had largely been let go between the two World Wars, and they became overgrown and abandoned.

However, in 2000, William Bunbury, son of the present Lord Rathdonnell, returned from Britain to take on Lisnavagh with ideas for new enterprises bringing Lisnavagh into the 21st century and beyond. The house underwent a major renovation project in 2005, and it is now available for private events and is increasingly popular as wedding venue.

Lisnavagh House offers a small mid-week wedding venue for up to 35 guests in the Dining Room, the Library is available for champagne receptions and the Schoolroom is used for small wedding ceremonies. There are open log fires throughout and direct access to the formal gardens.

Larger wedding receptions, like the one I was part of yesterday, take place the Garden Wing, a barn-like, rustic style building with a granite exterior and seating fir up to 170 guests. The Garden Wing also includes a bar or snug, a fully equipped kitchen, and a dancing and dining area. The French doors open out onto Lisnavagh Gardens and also link back into Lisanvagh House. 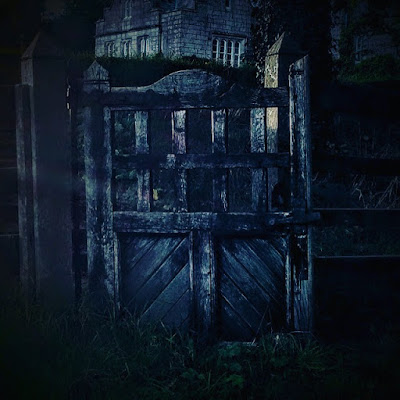 Farming and woodland schemes are part of the daily life on the farm and woodland at Lisnavagh (Photograph: Patrick Comerford, 2016)

Farming and woodland schemes are part of every-day life on the remaining 600 acres of farm and woodland at Lisnavagh. The Lisnavagh Timber Project now produces its own bespoke products from sustainable timber and Lisnavagh House is an established venue for weddings, yoga sleep retreats, corporate stays and other bespoke events and for private hire.

I was staying last night in Mount Wolseley, but other family members stayed on at Lisnavagh House. The bedrooms there include the Colonel’s Room, described recently in The Irish Times as ‘the most magnificent bed in Ireland,’ the Oak Room with its deep copper bath, the Butterfly Room, the Yellow Room, the Night Nursery, and Sasha’s Room and Day Nursery, all with views of the surrounding countryside of Co Carlow.

As I watched the full moon rise last night at Lisnavagh and cast its early autumn beams on the Carlow countryside and the woodlands of Lisnavagh, I was brought back in time to the moon rising over my grandmother’s house and farm at Moonwee, near Cappoquin, Co waterford, when I was growing up there as a child in the 1950s. Weddings, full moons and memories ... families nad life continue from one generation to the next. 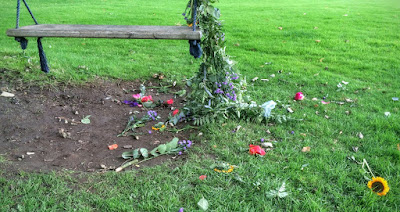 Wedding flowers strewn on the lawn at Lisnavagh House in the late evening (Photograph: Patrick Comerford, 2016