I spent much of Saturday [1 October2016] at my old school in Gormanston, Co Meath, where we were heard an interesting lecture by the local historian Brendan Matthews on the history of Gormanston Castle before we were brought on a guided tour of the castle by the Rector of Gormanston, Father Ulic Troy, entertained to a reception and lunch in the Refectory or dining room, and heard of the latest developments in the school from the Principal, Dermot Lavin, and the Deputy Principal, Vincent Dunne.

There was time too to reminisce about old friends and old teachers, sporting and academic achievements, and dramatic and musical escapades.

On a sad note, the Franciscan friars are moving out of Gormanston Castle after more than 60 years there. On a positive note, Gormanston College is the current reigning Leinster Rugby senior development shield champion, having defeated Tullamore College 22-20 in Donnybrook earlier this year [16 May 2016].

There will be time later in the week to write more about the history of Gormanston Castle and the Preston family. But earlier in the day and later in the afternoon there was time to stroll through the castle and college grounds, including Cromwell’s Avenue, the Yew Tree Walk, and by the river that runs through the grounds of the old castle. 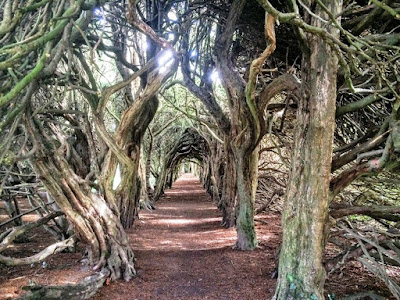 In the Yew Tree Walk at Gormanston (Photograph: Patrick Comerford, 2016)

I found time too for a walk through the neighbouring fields and countryside, where the surviving stubble from the harvest is leaving a mixture of autumn colours of yellow, green and brown, beneath the skies of blue, white and grey.

Later two us drove a little further north to Bettystown for a meal in Relish, where we were offered a table for two by the window near the terrace, looking across the long sandy beach and out across the Irish Sea to the east.

There had been occasional short showers of rain through the autumn sunshine throughout the day. But as we were finishing our meal in Relish, a rainbow opened up in the sky to the east and soon became a double rainbow. 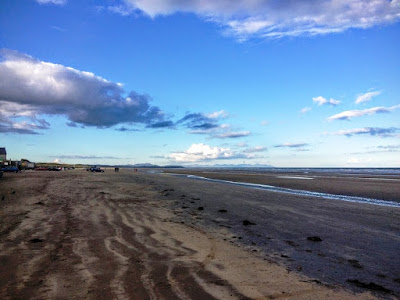 We went for a long stroll on the beach afterwards, and although the weather is still warm for this time of the year there were few people on the wide expanse of sandy beach.

Later, when were closer to home, and as the sun was setting, we realised that the Augustinian retreat house in Orlagh at the top of Ballycullen Road is about to close.

The house and the lands have been sold, the friars are moving to other Augutinian houses around Dublin. The Augustinians celebrate their last Mass in the chapel at Orlagh this morning [2 October 2016].

As the sun was setting behind us in the mountains it cast its beams across Dublin Bay below us. 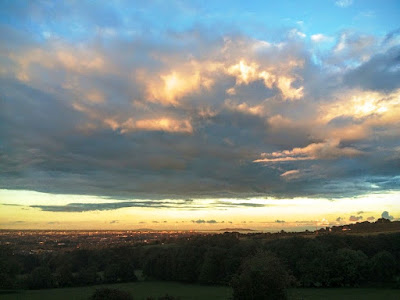