A Saturday morning at the Dark Hedges,
a much-photographed tree-lined avenue 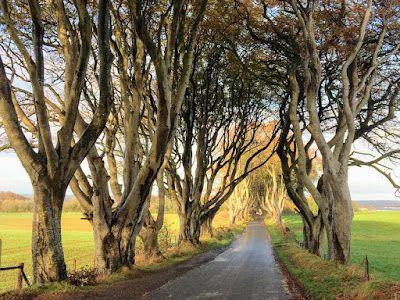 The Dark Hedges have become one of the most photographed natural phenomena in Northern Ireland (Photograph: Patrick Comerford, 2016)

Two weeks ago [13 November 2016], while I was on a tour of the Co Antrim coast that ended in the pretty village of Cushedun, I visited the ‘Dark Hedges,’ which is one of the most photographed natural phenomena in Northern Ireland and attracts tourists from all over the world.

The Dark Hedges is a quiet road near the town of Ballymoney in Co Antrim. It is just a short road surrounded by farmers’ fields, lined with beech trees whose twisted branches form an arch over the road. It has attracted photographers, painters, artists, composers and tourists for decades, and was used recently as a filming location in HBO’s epic series Game of Thrones, representing the King’s Road.

The Antrim-born composer Elaine Agnew premiered her compelling Dark Hedges composition at the BBC Proms in 2012.

This beautiful avenue of beech trees was planted by the Stuart family in the 18th century. They planned it as a driveway leading up to their home at Gracehill House and as a compelling landscape feature that would impress visitors as they approached the entrance to the Georgian country house.

James Stuart built Gracehill House around 1775 and named it after his wife, Grace Lynd. The family planted 150 beech trees along the avenue leading up to the entrance to their house.

The large estate surrounding the house dates back to the early 17th century, when King James I granted land to a cousin.

King James I estates in Ireland to a family member James Stuart by royal charter. James Stuart was the king’s ambassador to the court in Turin, and the grant included lands in Co Cavan, Co Monaghan and Co Antrim.

Unfortunately, the ambassador never had the opportunity to take up residence and drowned on his way to Ireland.

Later in the 17th century, Brigadier-General William Stuart raised a regiment to fight for William III and fought at Derry, Aughrim, Limerick and the Boyne. Because he was never reimbursed for raising the regiment, he became impoverished him and lost most of his estate.

His son James served with his father and became a colonel. Although severely wounded in battle, James and his wife Jane Irwin from Roscommon went on to have 21 children. 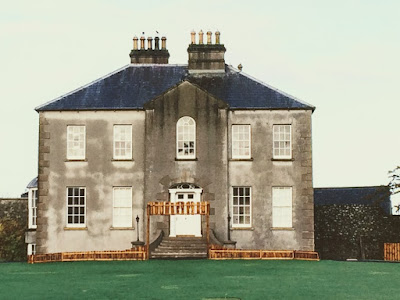 The Co Antrim estates stayed in the Stuart family, although it was some time before they built Gracehill House.

The Revd Irwin Stuart, a son of Colonel James Stuart, was ordained in the Church of Ireland and became Rector of Ballywillan and Ballyrashane, and later of Derrykeighan. He married Elizabeth McDaniel and they had six children – Christopher, James, Charles, Archibald, Elizabeth and Henry. It is not until we read of Irwin’s son James that we hear of Gracehill House being mentioned for the first time.

One of these sons, James Stuart, began building the house around 1775 and named it after his wife, Grace Lynd. Later, James raised a Yeomanry Corp, the 2nd Dunluce regiment, which was heavily involved in the suppression of the 1798 rebellion.

Meanwhile, Gracehill House developed a sense of grandeur, and the beech tree drive leading to the house was planted.

The Revd Charles Stuart, a brother of James Stuart, stayed at home and was ordained in the Church of Ireland. Two of his sons followed in the footsteps of their military forefathers and became officers in the 39th Regiment during in the Napoleonic wars in Spain in 1813-1814.

Eventually, the Stuart family left Gracehill House and settled in North America and across the globe.

More recently, Gracehill House was owned by Major Windsor in 1955 who married a Chichester of Galgorm. It was bought in 1971 by the Gillian family in 1971, who turned the landscape into an 18-hole championship golf course in 1995. It changed hands once again last year [2015].

The present owners are developing the property, including an 18-hole parkland golf course and the Hedges Hotel.

A favourite local story tells of the grey lady, said to glide along the Bregagh Road, sashaying between the gnarled trees. She is said to vanish from sight when she passes the last tree.

Some local people say she is the ghost of a maid from Gracehill House who died in mysterious circumstances centuries ago. Others say she is the daughter of James Stuart, referred to in some genealogical accounts of the family as ‘Cross Peggy.’ Others still say she is a lost spirit from an old, deserted graveyard hidden in the fields nearby. On Hallowe’en, the forgotten graves are said to open and the Grey Lady is joined on her walk by those who were buried beside her.

Today, this unique, tranquil and spell-binding tunnel of ancient beech trees stretches along the Bregagh Road, intertwining and entangling to create a spectacular fusion of light and shadow. With its mysterious and spectacular play of light and tranquillity the site has inspired visiting artists and photographers.

Now known as the Dark Hedges, this tunnel remains a magnificent sight and has become one of the most photographed places in Northern Ireland.

Although the branches of the trees have been pruned in recent years and the tunnel is a little less impressive than it once was, it remains a spectacular sight.

The Dark Hedges Preservation Trust plans to continue preserving, enhancing and promoting the Dark Hedges for future generations, endeavouring to maintain safe access to the site for visitors and local people, and utilising the hedges as a learning tool by improving and developing interpretation around the hedges.

From the Dark Hedges, it was a half-hour drive to Dunluce Castle, and from there we continued on to the Giant’s Causeway, the Carrick-a-Rede Rope Bridge and Cushendun. 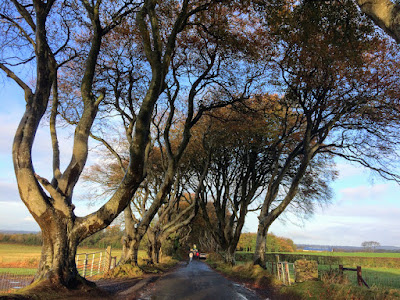