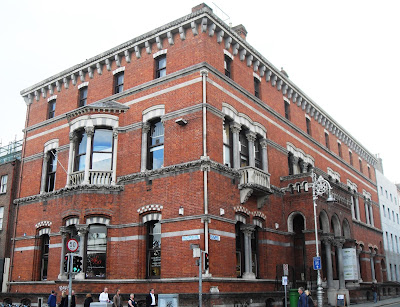 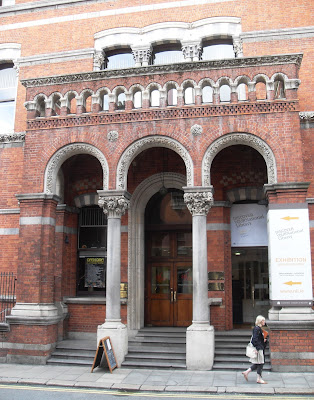 The Kildare Street Club was designed by Deane and Woodward in the Italian Gothic style (Photograph: Patrick Comerford)

My final visit this week is to the former Kildare Street Club, on the corner of Kildare Street and Leinster Street, on the south side of Trinity College Dublin.

The Kildare Street Club was founded in 1782, at the height of Grattan’s Parliament in Dublin. The club’s first home was a house in Kildare Street built by Sir Henry Cavendish on land bought from James FitzGerald, 20th Earl of Kildare, later 1st Duke of Leinster. In 1786, the club expanded its premises acquired an adjoining house also built by Cavendish, and completing its original club house.

The club was formed after William Burton Conyngham was black-balled at Daly’s Club in Dame Street, which stood on the present site of the Central Bank. Many members left Daly’s, and the new club soon became more fashionable.

Many of the earliest members, including Sir Jonah Barrington, opposed the Act of Union.

In a famous incident in 1806, Francis Mathew, 2nd Earl Landaff, a supporter of Catholic Emancipation, denounced the 85 scoundrels who had blackballed his brother, Montague James Mathew, and stalked out of the club, never to return.

By 1840, the club had 650 members, ‘a large and elegant card-room, coffee, reading, and billiard-rooms.’ The original premises at 6 Kildare Street soon became too small for the members’ needs, and in 1858 it was decided to build a new club house.

In 1859-1860, the new club house was built, designed by Thomas Newenham Deane and Benjamin Woodward. The new building replaced three existing houses on Kildare Street and one on Leinster Street, which were demolished, giving an L-shaped new building, with an internal plan similar to that of the Reform Club in Pall Mall, London.

The club had planned to move from the old to the new building in 1861, but on 11 November 1860 there was a disastrous fire at the old club house. Three maids died, and a fourth was saved because at the time she was in the bedroom of the club accountant and she was rescued. All the club pictures and furniture and a library of 15,000 books were destroyed, and the club moved into the new building before it was completed.

Woodward was commissioned to design new premises, but died in Lyons in France before the new building was completed. The project was then taken over by his partner Deane, who also designed the National Library and the National Museum further along Kildare Street.

The contractor was Gilbert Cockburn, who worked with Deane and Woodward on many of their buildings. Work began in February 1859, the club was built to first floor level by that November, and it opened in November 1861. The building costs came to more than £25,000. 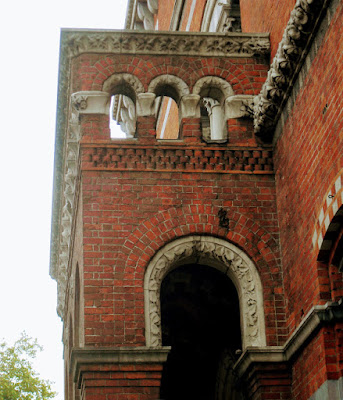 Deane and Woodward designed the Kildare Street Club in the Italian Gothic style, following the principles set out almost a decade earlier by John Ruskin. However, the club committee altered their original Italian Gothic design, insisting on large arched windows divided by thin columns, and the outcome was later described as Italo-Byzantine.

In their designs, Deane and Woodward were following the London fashion of drawing on Italian palazzi for inspiration for gentlemen’s clubs. In 1860, The Building News pointed to Pall Mall, where the Reform Club House was based on the Palazzo Farnese in Rome, the Travellers’ Club on the Pandolfini Casa d’Este in Florence, the Carlton on Sansoviuo’s Library of Saint Mark in Venice, while the Army and Navy Club was inspired by a palazzo on the Grand Canal in Venice.

It building is built mainly of red brick, with stone cornice, strings, and columns. The simple façade is broken only on the ground story by the projection of the balconied portico. The columns of this ripple-arched portico are executed in green and red marbles alternately, and the capitals are carved elaborately.

The interior was described as one of the finest interiors of 19th century Dublin, with its entrance hall, grand stair hall and reception rooms. 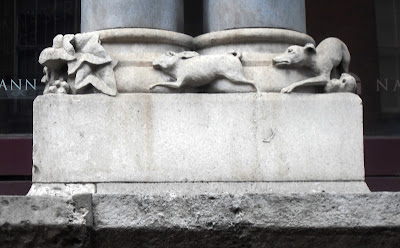 A greyhound chases a hare at the Kildare Street Club (Photograph: Patrick Comerford)

A notable feature of the building is the extravagant external sculpture and carvings around the window columns, with rich foliage, birds, mice, a greyhound chasing a hare, and monkeys playing billiards.

The monkeys playing billiards are a particular favourite: one is lining up his cue with the ball on the table, another is chalking his cue, while a third is watching on. 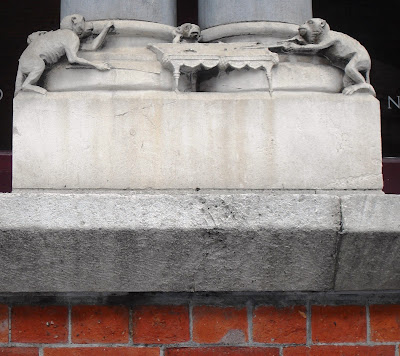 These carvings were badly damaged some years ago during an over-zealous cleaning of the façade. For many decades, architectural circles have debated who were the sculptors of the external mullions, the playful monkeys and other animals. The three main candidates are the O’Shea brothers, Charles W Harrison and Charles William Purdy of Purdy and Outhwaite.

The O’Shea brothers were also responsible for the carvings in the Oxford Museum as well as at the nearby Museum in Trinity College Dublin, which we visited on Wednesday [28 December 2016].

James and John O’Shea were the sons of a stone carver from Ballyhooley, Co Cork, who may have been a member of a family from Callan, Co Kilkenny. They worked for Deane and Woodward on the museum at Trinity College, Dublin (1853-1857) and with Edward Whelan they worked on the University Museum, Oxford (1854-1861).

At Oxford, it is said, some of their work was removed in the fallout from Darwin’s publication of the Origin of the Species. The O’Sheas had carved monkeys on one of the window surrounds that was removed because some Oxford dons could not accept that man was related to monkeys in any way.

According to local tradition in Callan, James and John O’Shea returned to Callan, and James O’Shea and his son Edward O’Shea were active in Callan from the late 1860s until the early 1880s. Edward O’Shea (1853-1910) later carried on the business in Kilkenny, and he was the Mayor of Kilkenny from 1904 to 1906.

On the other hand, Harrison did the carvings of snakes, snails and butterflies on the staircase, but many of the external and internal carvings were the work of Purdy and Outhwaite, Dublin-based architectural sculptors.

Charles William Purdy and John Henry Outhwaite came from England to Dublin and set up in business at 206 Great Brunswick Street around 1859 or 1860. The firm moved to Westland Row later in 1860, but their successes the business went bankrupt in June 1861. Purdy may have then moved to Belfast, while Outhwaite seems to have found work with another employer and is credited with executing the ‘exquisite’ font in Henry Hill’s church of Saint Edmund (Church of Ireland) in Coolkenure, Co Cork (1865).

The rival Saint Stephen’s Green Club was associated with Parnell’s Irish Parliamentary Party, while the Kildare Street Club was seen as Conservative and Unionist.

After partition in 1921, and again after World War II, the Kildare Street Club found itself in decline. The building was divided around 1954, and on 4 May 1967 a fire swept through the top floor of No 1 Kildare Street. causing extensive damage. Planning permission was refused for its demolition that year, but with a decline in membership the club decided in 1976 to merge with the University Club at 17 Saint Stephen’s Green as the Kildare Street and University Club and moved out.

The building was divided up in 1971 so that little remains of the once-elegant interiors. In what Christine Casey calls ‘the most singular act of architectural vandalism in recent Dublin history,’ Woodward’s fine staircase with its stone balustrades, the hall with its fine vaulted arcades, the drawing room, and the morning room were all destroyed and office space inserted into the building. 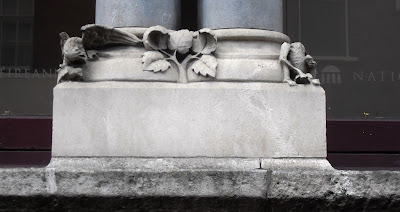 The former club house of Kildare Street Club is now leased to the Heraldic Museum and Genealogical Office, the Manuscripts Reading Room of the National Library, and the Alliance Française.

The main exhibition space of the Heraldic Museum demonstrates the scale and grandeur of the original interiors, while a hint of what may have been can be found by visiting the ‘Byzantine’ interior of the Museum Building in Trinity College Dublin. 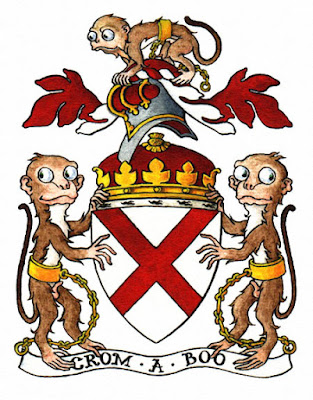 Monkeys on the coat of arms arms of the Duke of Leinster, as emblazoned by Michael Medvedev

As for those monkeys, and their supposed Darwinian associations, the Heraldic Museum and the club’s location on Kildare Street, close to Leinster House, may provide an alternative narrative.

The coat of arms of the Dukes of Leinster derives from the legend that John FitzGerald, 1st Earl of Kildare, as a baby in Woodstock Castle, was trapped in a fire when a pet monkey rescued him. The FitzGeralds then adopted a monkey as the crest on their coat of arms, and later as heraldic supporters, and they occasionally used the additional motto Non immemor beneficii (‘Not forgetful of a helping hand’).

Mice in the house ... part of the carvings at the former Kildare Street Club (Photograph: Patrick Comerford)