Carols and Hymns for Christmas (7):
‘From glory unto glory!’ 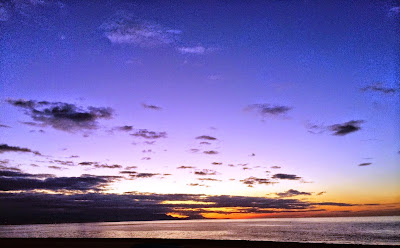 ‘From glory unto glory! O word of stirring cheer, / As dawns the solemn brightness of another glad New Year’ ... waiting for the dawn on Easter morning in Spain earlier this year (Photograph: Patrick Comerford, 2014)

We have come to the end of 2014 and are about to face the new year in 2015. As part of my spiritual reflections for this Christmas season, I am thinking about an appropriate carol or hymn each morning. This morning (30 December 2014), I have chosen ‘From glory unto glory!’ a New Year hymn written by Frances R Havergal (1836-1879) at Winterdyne, near Bewdley, Worcestershire, on 23 December 1873.

Frances Ridley Havergal was born on 14 December 1836, at Astley, near Bewdley, where her father, Canon William Henry Havergal (1793-1870), had been the rector. In 1842, he became Rector of Saint Nicholas’s Parish in Worcester, and a canon of Worcester Cathedral. In August 1850, she entered Mrs Teed’s school, where her teacher’s influence was life-lasting. In the following year, at the age of 14, she says, “I committed my soul to the Saviour, and earth and heaven seemed brighter from that moment.”

A short stay in Germany followed, and on her return she was confirmed in Worcester Cathedral on 17 July 1853. In 1860, she left Worcester when her father resigned as Rector of Saint Nicholas, and became Perpetual Curate (Vicar) of Saint Mary and Saint Luke, Shareshill, a small south Staffordshire village in the Diocese of Lichfield, five or six miles south-west of Cannock, seven or eight miles south of Penkridge and six miles north of Wolverhampton. Shareshill’s Church of England primary school is called Havergal. One of her best-known hymns,‘Take my life and let it be,’ has been adopted as the village school’s special hymn.

Frances Havergal was a scholarly writer, with a knowledge of French, German, Italian, Latin, Greek and Hebrew. She devoted her life to hymn-writing, and while her poetry has limited qualities, much it survives because she speaks so simply and so directly of the love of God and the promise of salvation. She is direct in expressing her narrow Calvinistic theological views, however. She expressed an intense dislike of Hymns Ancient and Modern, which she regarded as “the thin edge of Popery,” she was strongly opposed to Roman Catholicism and she supported strident evangelical missions, including the Irish Church Missions.

This morning’s hymn, ‘From glory unto glory!,’ is less known than some of her other New Year hymns. It is based on Saint Paul’s words in II Corinthians 3: 18: “And all of us, with unveiled faces, seeing the glory of the Lord as though reflected in a mirror, are being transformed into the same image from one degree of glory to another; for this comes from the Lord, the Spirit.”

In this hymn, she looks back on the past year and forward to the New Year:

From glory unto glory! O word of stirring cheer,
As dawns the solemn brightness of another glad New Year.

The tune is named after its composer and was published in The Hymnary (1872). It has has four broad phrases, and its repetitions of melodic and rhythmic units make it accessible and loved. The harmony suggests a stately tempo.

Berthold Tours was born in Rotterdam in the Netherlands in 1838. He received his early musical education from his father, the organist at the Saint Laurents Kerk in Rotterdam. He continued his training in conservatories in Leipzig and Brussels, and spent two years studying in Russia.

He moved to London in 1861 when he accepted the opportunity to teach violin and to play in several orchestras. A year later, he became the organist of the Swiss Church in Holborne. From 1878, he worked as an editor and arranger for the music publisher Novello.

Tours wrote piano arrangements of operas and oratorios but is best remembered for his hymn tunes, anthems, and liturgical service music. He died in Fulham in 1897.

From glory unto glory! by Frances Havergal

And closer yet and closer the golden bonds shall be,
Uniting all who love our Lord in pure sincerity;
And wider yet and wider shall the circling glory glow,
As more and more are taught of God that mighty love to know.

Oh, let our adoration for all that He hath done,
Peal out beyond the stars of God, while voice and life are one;
And let our consecration be real, deep, and true:
Oh, even now our hearts shall bow, and joyful vows renew.

Now onward, ever onward, from strength to strength we go,
While grace for grace abundantly shall from His fullness flow,
To glory’s full fruition, from glory’s foretaste here,
Until His very presence crown our happiest New Year.

Tomorrow: ‘In the Name of Jesus’