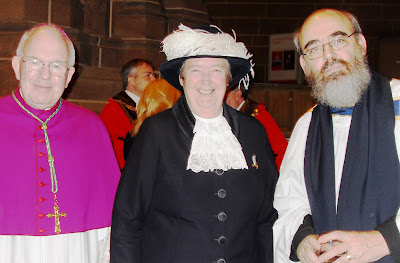 With Professor Helen Carty, then High Sheriff of Merseyside, and the Roman Catholic Archbishop of Liverpool, the Most Revd Patrick Kelly, at Judges’ Service in Liverpool Cathedral on Sunday 16 October 2011

It was sad to read today of the death in Liverpool of Professor Helen Carty, who died at home earlier this week [23 April 2017]. As High Sheriff of Merseyside, Dr Carty warmly welcomed me to Liverpool in October 2011, when I was invited by Archbishop Justin Welby, the then Dean of Liverpool, to preach at the Annual Judges’ Service in Liverpool Cathedral.

Archbishop Welby was about to be consecrated Bishop of Durham later that month. But he was delighted that Helen was attending the service, and she was delighted to welcome an Irish theologian who was preaching in the city she had made her home. Later that day, I was the guest of honour at a lunch Helen and her husband Austin hosted for the judges in the Artists’ Club in Liverpool.

Helen Carty had a distinguished career as a radiologist at Alder Hey Children’s Hospital, and her career gained wide international recognition.

Professor Carty was born Helen M.L. Moloney in Dungarvan, Co Waterford, and spent most of her working life with children and their families.

She received her degrees in Medicine and Surgery Obstetrics from University College Dublin in 1967. Her clinical studies were in the Mater Hospital. Initially, she studied internal medicine, obtaining membership of the Royal College of Physicians in Ireland and she was subsequently elected a Fellow.

Shen then began training in radiology and completed her residency in radiology at Saint Thomas’ Hospital, London. In 1974, she became a fellow of the Royal College of Radiologists and in 1975 she became Consultant Radiologist in 1975 at the Royal Liverpool Children’s NHS Trust, Alder Hey, becoming Director of Radiological Services there in 1977. She continued to hold that post for 27 years.

She had broad interests within paediatric radiology, and she introduced interventional procedures to the children’s hospital. She had a special interest in the radiology of non-accidental injuries and lectured extensively on that subject.

She believed she and Austin were fortunate to work in radiology at a time of unprecedented development, when many of the techniques now taken for granted were developed, including Ultrasound, CT and MR were all developed.

She seized the opportunity to introduce and adapt these techniques for use in children and to develop paediatric radiology, locally, nationally and internationally. The first CT scanner in Alder Hey was bought through a public appeal that raised £1.25 million. She was the medical lead for this appeal which raised the money in 1984-1987, a tribute to the generosity of the people of Merseyside.

She became involved in European radiology through the European Congress of Radiology (ECR), founded in 1991 in Vienna, and she contributed to the development of Radiology particularly in Eastern Europe following the collapse of communism. Her election as President of ECR in 2004 marked the culmination of a lifetime’s work.

She was President of the Liverpool Medical Institution (1993-1994) and served on many committees of the Royal College of Radiologists, including serving a four-year term as Warden of the College. She was also an external examiner or supervisor of MD and PhD theses in Dublin, Pakistan, Malaysia and Singapore, and on many occasions she was a visiting professor or lecturer in Asia, Australia, Europe, the Middle East, South America, South Africa and the US.

Austin is also a radiologist, and they were married in 1967. They have three children and six grandchildren. They retired on the same day to have time to spend with each other and their children.

Her private cremation next week is for her family only. Later next month, a Service of Remembrance will be held in Liverpool Cathedral at 11 a.m. on Tuesday 30 May. She has asked for no flowers, but donations can be made to the Liverpool Cathedral Foundation 2024 Appeal.