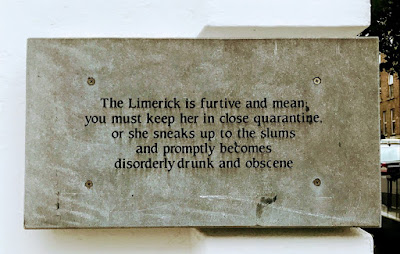 The lure of the Limerick … lines on the corner of Limerick’s White House (Photograph: Patrick Comerford, 2017)

On a street corner in Limerick, an inscribed stone juts out from O’Connell Street into Glentworth Street, with the words:

The Limerick is furtive and mean;
you must keep her in close quarantine,
or she sneaks up to the slums
and promptly becomes
disorderly, drunk, and obscene.

For many Limerick, Limericks and poetry are difficult to separate. For some, the Limerick may have been their introduction to poetry, for others they never moved beyond the fun of the Limerick to enjoy the breadth of opportunity offered by poetry.

It is widely thought that Edward Lear invented the Limerick, although this is probably incorrect.

The Limerick as a form was popularised by Edward Lear in his first Book of Nonsense (1846) and a later work, More Nonsense, Pictures, Rhymes, Botany, etc. (1872). Lear wrote 212 Limericks, mostly considered nonsense literature. The humour is not in the punch line ending but rather in the tension between meaning and the lack of meaning.

In one of his typical Limericks, Lear wrote:

There was a Young Person of Smyrna
Whose grandmother threatened to burn her.
But she seized on the cat,
and said ‘Granny, burn that!
You incongruous old woman of Smyrna!’

Whether he invented it or not, Lear certainly made the Limerick popular. The Oxford English Dictionary first defined the word Limerick in 1892, four years after Lear’s death. But as OE Parrott makes clear in the opening pages of The Penguin Book of Limericks:

The Limerick’s birth is unclear:
Its genesis owed much to Lear.
It started as clean,
But soon went obscene.
And this split haunts its later career.

But in Limerick, it is said the five-line verse probably originated from the Limerick-makers of Croom, known as the Maigue poets, who worked in the 18th century. They were school-teachers, priests and self-styled persons of letters, living within 30 km of Croom. Their gatherings and revels in pubs and inns were said to resemble the ancient Irish bardic schools, conducted in Greek, Latin and Irish.

One of the Maigue’s first-known Limerick-writers was a publican, John O’Toumy, who was born near Croom in 1706. Of his own business practices, he bemoaned:

I sell the best brandy and sherry,
To make my good customers merry.
But at times their finances
Run short as it chances,
And then I feel very sad, very.

To this another Maigue poet, Andrew McCrath, quickly retorted:

O’Toumy! You boast yourself handy
At selling good ale and fine brandy,
But the fact is your liquor
Makes everyone sicker,
I tell you that, I, your friend, Andy.

Ronald Knox caricatured the philosophy and theology of the I8th century Irish bishop George Berkeley in a pair of Limericks:

There was a young man who said, ‘God
Must think it exceedingly odd
If he finds that this tree
Continues to be
When there’s no-one about in the Quad.’

And the reply, according to Knox was:

Dear Sir:
Your astonishment’s odd:
I am always about in the Quad.
And that’s why the tree
Will continue to be,
Sincerely observed by, Yours faithfully, GOD.

The poet WH Auden, whose literary corpus is marked by thoughtfulness and solemnity, seemed to find release in the humour of the Limerick:

T.S. Eliot is quite at a loss
When clubwomen bustle across
At literary teas,
Crying: ‘What, if you please,
Did you mean by The Mill on the Floss?’

The plaque celebrating the fun of the Limerick is on a corner of Limerick’s White House pub, which dates back to 1812. One previous manager attributed the pub’s enduring success over the past 200 years to the fact that it is ‘simple in its design, everything works. It has basically been untouched since it first opened.’

This has been a favourite haunt of bankers, lawyers, artists and musicians. Jack Charlton, Jim Kemmy, Frank McCourt and Richard Harris are all said to have had a pint here.

The pub earned its name not because of its colour but because the company that first opened the White House was WH White & Co. It was bought by Eamonn Gleeson and his family in the 1920s. Eamon Gleeson, whose picture hangs proudly in the bar, was noted as ‘an eccentric, who used to wire all the bar stools together so they couldn’t be moved.’

For a long time the bar and its management prided themselves on the fact that this was one of the few pubs in Limerick not to have a TV, focusing instead on poetry and acoustic music nights, promoting local writers and singers.

The pub is known for its artistic and cultural heritage. The White House poetry nights have featured poets from all over the world, and the pub has always been supportive of actors, writers and musicians. The pub was bought in 1999 for the equivalent of €1 million. But the poetry nights continued, and in 2015 the White House celebrated a cultural milestone in marking 600 consecutive poetry nights.

When the White House was bought last year by the former Munster and Ireland rugby player Damien Varley, reportedly for €650,000, a Facebook page was set up to save the pub from being turned into a sports bar. 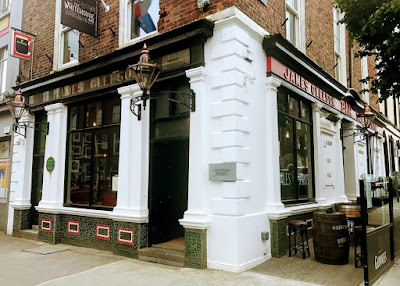 The White House is a prominent building at the corner of O’Connell Street and Glentworth Street. It was designed to address both streetscapes in a formal architectural manner. The late 19th century shopfront and the Victorian pub interior make this building one of architectural importance.

This end-of-terrace, two-bay, four-storey building over a concealed basement has a three-bay, four-storey over basement south-facing side elevation. It was first built as a red-brick townhouse about 1810, but the shopfront dates from the late 19th century, with Doric pilasters on both elevations rising from ‘crazy’ tiled stall-riser plinths flanking both door openings and display windows, and supporting a timber framed fascia board with incised lettering behind glass panes that reads: ‘James Gleeson.’

The roof is concealed behind a parapet wall. Red brick walls laid in Flemish bond with cement repointing. A gantry crane on the side elevation may be original and was probably used to hoist goods to and from the basement level.

A plaque erected by Limerick Civic Trust on the left-hand side of the O’Connell Street façade was unveiled by President Michael D Higgins on 24 February 2015 as a tribute to the Limerick-born poet Desmond O’Grady (1935-2014), who began reading his poetry at the White House Bar in 1954 as part of the Poetry Circle.

When Desmond O’Grady died at the age of 78 in 2014, President Michael D Higgins led the tributes, describing him as one of Ireland’s best-known poets, who was deeply committed to his work.

With the exception of Yeats, he was arguably the most international of 20th century Irish poets.

He also published over a dozen collections of translated poetry, among them Trawling Tradition 1954-1994, Selected Poems of CP Cavafy, The Song of Songs, Ten Modern Arab Poets, and Kurdish Poems of Love and Liberty. His other works include prose memoirs of his literary acquaintances and friends. 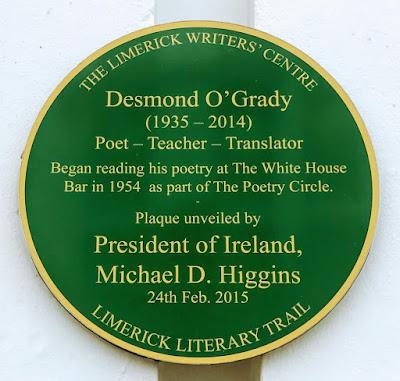 A plaque on the façade of the White House celebrated the Limerick-born poet Desmond O’Grady (Photograph: Patrick Comerford, 2017)

Desmond O’Grady was born in Limerick in August 1935, and spent much of his childhood in West Clare and the Irish-speaking districts of Co Kerry. After boarding school in Roscrea, Co Tipperary, he moved to Paris in the 1950s and worked in the Shakespeare and Company bookshop, so closely associated with James Joyce and the publication of Ulysses.

He went on to teach in Paris, and there he became friends with Jean-Paul Sartre, Simone de Beauvoir, Pablo Picasso, and Samuel Beckett, who had recently published Waiting for Godot.

When he married an exiled Iraqi Catholic, they moved to Rome, where O’Grady taught English and was the English-language voice of Pope Pius XII on Vatican Radio. In Rome, he also met Federico Fellini and played the role of an Irish poet in Fellini’s La Dolce Vita. For some years, he was secretary to the American poet Ezra Pound in his exile in Italy.

When he and his wife separated, he went to teach at Harvard, where he also completed his MA and PhD in Celtic Languages and Literatures and Comparative Studies. At Harvard, he became friends with Robert Lowell, and continued the links he had forged in Europe with the Beat writers Kerouac and Ginsberg. O’Grady also worked as the European editor of The Transatlantic Review.

He returned to his spiritual home on mainland Europe, and from Europe, he went to Egypt. While was absorbing, distilling, and writing, he was teaching at the American University in Cairo, where he was Poet in Residence, and at the University of Alexandria.

When he returned to live in Ireland, he settled in Kinsale, Co Cork, where he lived for the last 20 years of his life.

We met soon after his return to Ireland, and had a lengthy discussion about the Greek poet CP Cavafy, who was born in Alexandria. Over 20 years ago, in ‘An Irishman’s Diary’ in The Irish Times in 1996, I wondered why little attention had been given to his translation of 33 of Cavafy’s poems. This version of 33 Cavafy poems, Alternative Manners, was published in 1993 by the Hellenic Society (Athens and Alexandria). Unfortunately, much to his regret, the proofs were never properly corrected, and so the book was never put on the market commercially and has never been reviewed in newspapers.

He felt Alternative Manners ‘reads like Greek ruins’ and asked later readers to ‘please forgive, and overlook, and correct.’ But, he conceded modestly, the collection had its admirers. ‘Greek people who know their Cavafy and who have read it found my Hiberno English very suited to Cavafy’s Alexandrian Greek, and closer to the text of Cavafy’s language than standard British and American translations.’

A reading of two of Cavafy's best-known poems illustrates the particular insights and turn of phrase which an Irish translator brought to his work. His translation of Ithaka loses the references by Kimon Friar and Edmund Keeley and Philip Sherrard to Laistrygonians and Cyclops; instead, they become ‘cannibal bogeymen met in half light’ and ‘those with one eye, open for their main chance.’ The ‘Phoenician trading stations’ or ‘market places’ of the other translators become ‘ports you’ve not dreamed of’ and ‘every city.’

In Waiting for the Barbarians, Sherrard and Keeley have the city fathers ‘assembled in the forum’ and Friar has them mustered in the forum, but O’Grady, who renames the poem Expecting the Barbarians, has them ‘waiting, here in the square.’ Instead of the barbarians being dazzled, they are not impressed by ‘bamboozle.’ And, instead of rhetoric and public speaking or ‘eloquence and public speeches,’ O’Grady speaks of ‘boring baloney.’

At the time, I noted how O’Grady had come to regard Greece as his second home. I suggested his earlier frustration with the Greek printer’s handling of Alternative Manners ‘could be rectified if an Irish publisher found an interest in the book.’

That hope was realised in 1998, when the Dedalus Press in Dublin published Selected Poems of CP Cavafy, a volume that was reissued in 2012, two years before he died.

Desmond O’Grady was unusual among Irish poets of his generation for both his interest in modernist experimentation and his immersion in the poetry of other cultures. He was, in the true sense, a citizen of world poetry.

He died in 2014, on the eve of his 79th birthday. In his later years he took comfort in the theme in Cavafy’s Ithaka – it is the journey, not the destination, is what constitutes our true reward:

Keep Ithaka marked on your mind’s map,
always. Arrival there is your final goal.
Don’t hurry your journey in any way. Better
to last it for decades. As you age, anchor
at small islands with the wealth you’ve acquired
voyaging. Never expect Ithaka to give you anything.
Ithaka gave you the journey. 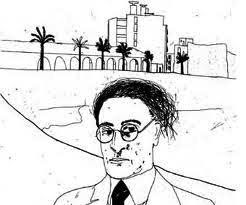