The Greeks have a word for it:
(18) theatre and drama 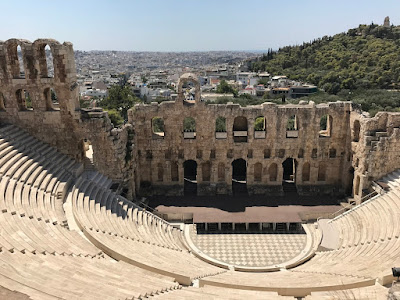 The Odeon or Theatre of Herodes Atticus on the southern slopes of the Acropolis (Photograph: Patrick Comerford, 2017)

As I climbed the Acropolis in the summer sun on Saturday afternoon [19 August 2017], I stopped a number of times to admire the other sites that illustrate how this place was essential to the life and culture of ancient Athens.

They include, for example, the Theatre of Dionysus and the Herodium or Theatre of Herodes Atticus.

While I was in Crete in June and July, I blogged regularly about Greek words that we have adapted and integrated into the English language. But climbing up the Acropolis on Saturday, I was reminded too that words such as theatre, drama and tragedy are derived from Greek and the cultural life of classical Athens.

The word theatre comes from the Ancient Greek θέατρον (théatron), ‘a place for viewing’, itself from θεάομαι (theáomai), to see, to watch, or to observe.

Modern Western theatre comes owes its ideas, concepts and inspiration to ancient Greek drama, and borrows technical terminology, classification into genres, and many of its themes, stock characters, and plot elements.

Our concept of theatre originated in the city-state of Athens, where theatre was part of a broader culture of theatricality that included festivals, religious rituals, politics, law, athletics, the gymnasium, music, poetry, weddings, funerals, and symposia.

Taking part in the City Dionysia was mandatory for citizens of Athens,, either as member sof the audience or as participants, and was an important part of citizenship. Civic participation also involved the evaluation of the rhetoric of orators in the law courts and political assembly, both of which were analogous to the theatre and came to absorb its dramatic vocabulary.

The Theatre of Dionysus … the site of the great drama competitions in Athens (Photograph: Patrick Comerford, 2017; click on image for full-screen view)

The Theatre of Dionysus was the site of the great drama competitions, where tragedies and comedies by the great playwrights were performed before audiences of 15,000 people, with the engraved marble seats in the front rows reserved for the priests of Dionysus.

The Greeks also developed the concepts of dramatic criticism and theatre architecture. Actors were either amateur or semi-professional.

The theatre of ancient Greece consisted of three types of drama: tragedy, comedy, and the satyr play.

Aristotle was the first theoretician of theatre, and his Poetics (ca 335 BC) is the earliest work of dramatic theory. Aristotle considered drama as a genre of poetry in general, and he contrasted the dramatic mode with the epic and the lyrical modes.

He traced the origins of the theatre in ancient Greece to the festivals that honoured Dionysus. The performances took place in semi-circular auditoria cut into hillsides and seating 10,000 to 20,000 people in the audience. The stage consisted of a dancing floor (orchestra), dressing room and the scene-building area (skene).

Since the words were the most important part of the play, good acoustics and clear delivery mattered. The actors, who were always men, wore masks appropriate to the characters they represented, and each actor might play several parts.

Athenian tragedy – the oldest surviving form of tragedy – is a type of dance-drama that formed an important part of the theatrical culture of Athens. It emerged in the 6th century BC, flowered in the 5th century BC, and continued to be popular until the beginning of the Hellenistic period.

The word τραγῳδία (tragoidia), which gives us the word ‘tragedy,’ is a compound of two Greek words: τράγος (tragos) or ‘goat’ and ᾠδή (ode) meaning ‘song,’ from ἀείδειν (aeidein), ‘to sing.’ This etymology indicates a link with the practices of the ancient Dionysian cults.

We have no surviving tragedies from the 6th century BC, and only 32 of more than 1,000 that were performed in the 5th century BC have survived, with complete texts for plays by Aeschylus, Sophocles and Euripides.

The origins of tragedy remain obscure, though by the 5th century BC it was institutionalised in competitions (agon) held as part of the festivities celebrating Dionysus, the god of wine and fertility.

The Dionysian competition was the most prestigious of the festivals to stage drama. Playwrights were required to present plays that usually consisted of three tragedies and one satyr play. The performance of tragedies at the City Dionysia may have begun as early as 534 BC, when Pisistratus, the ruler of Athens, formalised the Dionysian festivals into full drama competitions that took place each year.

The first competition was won by Thespis, who is remembered for his innovation of the solo narrative. He gives his name to the word thespian, and the role he created is now known as the protagonist.

Most Athenian tragedies dramatise events from Greek mythology, although the notable exception is The Persians, which tells of the Persian response to the news of their military defeat at the Battle of Salamis in 480 BC. When Aeschylus won first prize for it at the City Dionysia in 472 BC, he had been writing tragedies for more than 25 years. However, this tragic treatment of recent history is the earliest example of drama to survive. His Oriestea tells of the house of Atreus, the most dysfunctional family in ancient Greece.

Aeschylus, who is regarded as the ‘Father of Tragedy,’ introduced the second innovation with the antagonist. Sophocles, who defeated Aeschylus in 468 BC, introduced a third innovation – a third character. Only seven plays by Sophocles have survived, and his reputation rests on the three plays in the Theban tragedies: Oedipus Rex, which is still considered the greatest masterpiece of tragedy, Oedipus at Colonus and Antigone.

After the age of great tragedy, Aristophanes, the greatest comic playwright, brought a breath of fresh air to Athenian drama. His raunchy, hilarious Lysistrata is one of the great anti-war protests of all time. The play tells of how the women of warring Sparta and Athens refused to sleep with their husbands until they stopped fighting.

Athenian comedy is usually divided into three periods, ‘Old Comedy,’ ‘Middle Comedy’ and ‘New Comedy.’ Old Comedy survives today largely in the 11 surviving plays of Aristophanes, while Middle Comedy is largely lost. New Comedy is known primarily from the substantial papyrus fragments of Menander, whose statue stands in front of the Theatre of Dionysus. 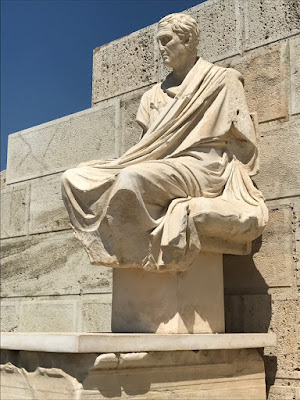 The statue of Menander in front of the Theatre of Dionysus (Photograph: Patrick Comerford, 2017)

Aristotle defined comedy as a representation of laughable people that involves some kind of blunder or ugliness that does not cause pain or disaster.

Drama is the specific mode of fiction represented in performance. Considered as a genre of poetry in general, the dramatic mode has been contrasted with the epic and the lyrical modes ever since Aristotle.

The word drama comes from the Greek word δρᾶμα (drama), meaning action, and which is derived from the verb δράω (drao), to do or to act. In Ancient Greece, however, the word drama encompassed all theatrical plays, tragic, comic, or anything in between. 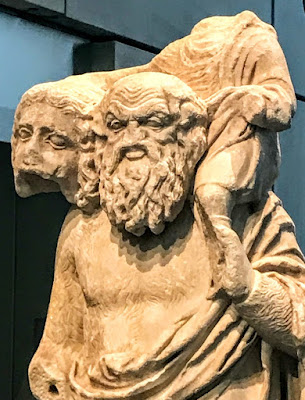 Classical masks from the theatre in Athens on display in the Acropolis Museum (Photograph: Patrick Comerford, 2017)

The two masks associated with drama represent the traditional generic division between comedy and tragedy, and are symbols of the ancient Greek Muses, Thalia, and Melpomene. Thalia was the Muse of comedy (the laughing face), while Melpomene was the Muse of tragedy (the weeping face).

The Odeon of Herodes Atticus is a late addition to the Acropolis. It was built on the south slopes of the Acropolis in the year 161 AD by Herodes Atticus, a wealthy Roman, in memory of his wife Regilla. For almost 2,000 years, this amphitheatre was the premiere showcase for the performing arts in Athens. 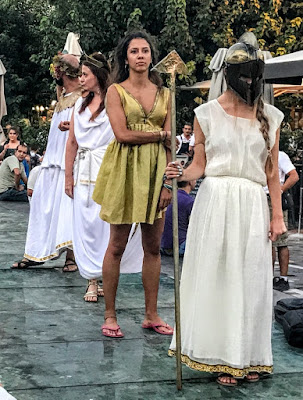 Actors promoting a theatrical performance of classical drama in the square at Monastiraki (Photograph; Patrick Comerford, 2017)

Posted by Patrick Comerford at 18:41