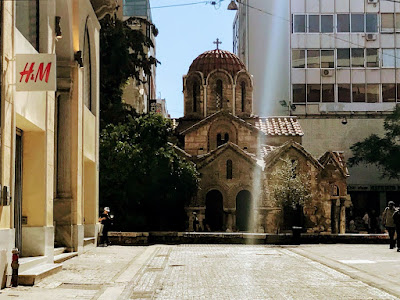 The tiny Church of Kapnikarea is stranded in the middle of Ermou Street (Photograph: Patrick Comerford, 2017)
Patrick Comerford
The area of Monastiraki is busy spot in the heart of Athens. Here is flea market, a busy square and metro station, and shopping streets and restaurants that are a continuation of the Plaka and that offer spectacular views of the Acropolis, especially at night, and many of the other classical sights of Athens, including the Agora, Hadrian’s Library, the Tower of the Winds and the Temple of Hephaestus. The area takes its name from the church and monastery that stood in this neighbourhood from the 10th century. Most of the monastic lands were lost as a consequence of the major archaeological excavations that began in the 19th century, and with the monastery’s land-holdings and property rapidly the area being depletd, the area itself became known as Monastiraki, or ‘Little Monastery.’ However, the Church of Pantánassa or the Dormition of the Virgin Mary, which was built in 1678, still dominates Plateia Monastiraki or Monastiraki Square, towering above the street artists, the stall holders and the commuters. But just a few steps away, the small Church of Kapnikarea is a more unusual and charming church, and is stranded in the middle of Ermou Street.
The Church is known in Greek as Εκκλησία της Παναγίας Καπνικαρέας, or simply as Καπνικαρέα, Kapnikaréa, is one of the oldest churches in Athens. The unusual name may be derived from the kapnikon, a tax imposed in the Byzantine era, or from the name of the Kapnikares family. Other names given to the church in the past include Kamoucharea, from the luxurious Byzantine textile kamoucha, which was made in the nearby workshops, Chrysocamouchariotissa, and Panaghia tis Vasilopoulas (The Virgin Mary of the King’s daughter). This tiny, 11th century church was built around 1050. It stands right in the middle of Ermou Street which links Kerameikos and Monastiraki at its western end with Syntagma Square at its eastern end. The church was built over the ruins of the Greek temple of a goddess, either Athena or Demeter. Its dome is supported by four Roman columns, and inside it is beautifully decorated with mosaics and Byzantine frescoes. Kapnikarea may have been the katholikon of a monastery originally. The building is now made up of by a complex of three different units attached together. These units were built in succession: the largest south church dedicated to the Presentation of the Virgin Mary in the Temple; the chapel of Saint Barbara on the northern side; and the exonarthex with the propylon to the west.
The larger of the two churches, the south one, is a domed complex and is cross-in-square shape. It has been dated to just after the middle of the 11th century. Ermou is a busy and bustling shopping street, and the church was once threatened with demolition, standing in the way of the planners’ dreams of a straight street that would run all the way from the Parliament in Syntagma Square to the port at Piraeus.
In the 19th century, the church had fallen into a bad state of repair after the Greek War of Independence. It was in such an ugly state, that even today Athenians may say that an ugly old woman looks like Kapnikarea.
King Otto I had brought the Bavarian architect Leo von Klenze to Greece to draw up plans for a new city plan in Athens. The church was stood in the way of one of those streets and was designated for demolition in the 19th century. However, the king’s father, King Ludwig I of Bavaria, objected to the decision. The church was rescued and restored. Since 1934, the church belongs to the University of Athens. It remains a curiosity and the city’s most unique traffic island. In Monastiraki, I also visited the Church of Aghios Philippos or the Apostle Philip on a corner opposite the entrance to the Ancient Agora, between Monastiraki and Thesseion. The church is built like a three-aisle vaulted basilica with a simple gallery and a steeple. It is built on the site of an earlier Christian basilica that was destroyed by the Turkish army under Kutahi Pasha (1826-1827) during the siege of Athens. In 1912 the church was renamed to Aghios Philippos Vlassarous as it merged with the nearby church of Panaghia Vlassarous, which was demolished during the excavations at the ancient Agora in 1932-1937. The present church of Aghios Philippos was built in 1961.
The iconostasis or icon screen was made in 1849 and came from an older church. The relics in the church are said to relics of the Apostle Philip, and the church also has icons from the demolished church of Panaghia Vlassarous. 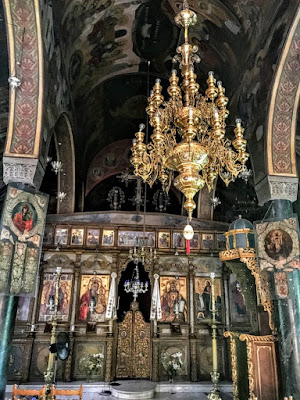