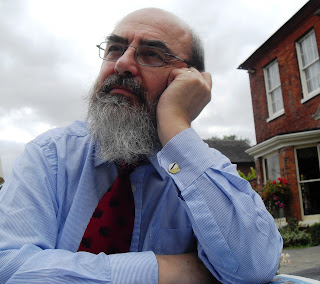 I have maintained a family history website that connects me with people across the globe who share my surname and its variants, including Comerford, Commerford and Comberford. This website allows many people to develop a shared identity, not only because of a shared family name, but because they believe that they have found an identity that is rooted in time and place.

For Irish people, the county can be a key indicator of identity. In the Irish sporting calendar, September is the month of the All-Ireland hurling and football cup finals. County identity becomes a key expression of personal and communal identity throughout this month, with people wearing their country colours in a variety of ways and flying county flags from homes and cars, at workplaces and schools.

Grand schemes for extending local government boundaries, to take account of the suburban expansion of Waterford city into neighbouring Co Kilkenny or Limerick city across the River Shannon into Co Clare, generally fall at an early because county identity so much a part of personal identity in Ireland. It is an expression of identity that Irish people take with them as exile and emigrants, and bars and pubs from Boston and New York to Sydney and Melbourne take on hues in September that can only be understood by people who understand the nuances of Irish identity.

It bears no comparison with the colours and clothing worn by English football fans. Manchester United fans are more likely to live outside Manchester than in it, and Irish sports fans who identify with their county and have a strong sense of place find it paradoxical, for example, that Chelsea plays in Fulham.

The nearest equivalent to this expression of identity in England is probably found in Yorkshire, or perhaps in the red rose, white rose identity that comes to the fore in cricket matches between Lancashire and Yorkshire. But the expressions of identity found at the Galway v Waterford final would never find an equivalent at a cricket match between, say, Middlesex and Surrey.

Asking someone from England where they are from often elicits answer that names where someone is living or working at present, rather than where they were born or where they have deep family roots. Indeed, in many cases people do not know where their family roots might be found.

For Irish people, where you are from is not necessarily about where you were born. It may be where one or both your parents are from, where you spent most of your childhood, or perhaps even your grandparents’ home where childhood identities were shaped over long, successive childhood summer holidays. It is a question of identity that has both emotional and spiritual dimensions.

The nearest equivalent with which I can compare this sense of identity is found in Greece. People living in large cities, such as Athens, Thessaloniki or Iraklion, can still identify their home village, and there they may return for holidays and to vote, to marry, have their children baptised and even to be buried.

A balanced understanding of belonging in space and time is an essential ingredient in creating a positive sense of identity that enhances an individual’s spiritual health. But the search for an identity with place often leads the city-dweller into the countryside, and fails to accept that the city too may be a place of spiritual identity, comfort and growth.

I moved around a lot as a child and a young adult, so that often I feel that I am not at home in any one place, and wonder where I am going to find myself living next. Although I was born in south Dublin and for the past three decades have had a house that is almost within walking distance of where I was born, there are times that are unsettling when I realise I am asking myself where do I truly feel at home.

There is a traditional American spiritual song, once adapted and recorded by Jim Reeves, that claims in the original version:

This world is not my home, I’m just passing through.
My treasures are laid up somewhere beyond the blue.
The angels beckon me from Heaven’s open door
And I can’t feel at home in this world anymore.

And the words of the chorus are:

O Lord you know I have no friend like you
If Heaven’s not my home, then Lord what will I do?
The angels beckon me from Heaven’s open door
And I can’t feel at home in this world anymore.

Yet, the places that shaped me from birth to where I am in life now are the places that make me who I am now and not only can I rightly call them home, but they have formed and shaped the person I am today.

I was born in south Dublin, spent formative years in my early childhood on my grandmother’s farm in West Waterford, went to school near Drogheda, and in those late teen and early adult years that shape our mature identity I was spending time in both Lichfield in the English Midlands and Wexford in south-east Ireland, places that I was first attracted to because of paternal ancestral roots.

To this day, I can often say that I feel comfortably at home in Dublin, Wexford, and Lichfield, and even in Crete. I have been shaped spiritually in these places, nurtured in them spiritually, and these are places where I have encountered the living God and where I feel I am standing on holy ground. I can truly say that I have been born in these places, at least spiritually, and that my spirituality has been formed and matured through my experiences there.

‘You stand on holy ground’ 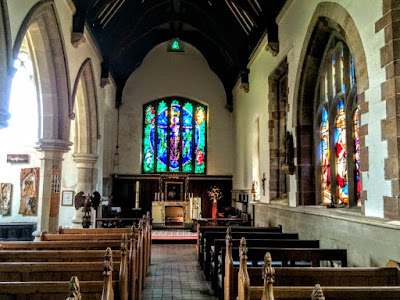 The chapel in Saint John’s Hospital, Lichfield … ‘the intersection of the timeless moment’ (Photograph: Patrick Comerford)

As I write, we are working our way in the Lectionary readings through the Exodus story. When Moses encounters God in the burning bush on the mountain, he is told, ‘Remove the sandals from your feet, for the place on which you stand is holy ground’ (Exodus 3: 5).

The ground on which we stand when we are in places that have shaped us and that have made us who are today can be holy ground on which we have an encounter the Living God who created us and who shaped us into who we are today. In my late teens, I regularly visited Comberford, between Lichfield and Tamworth, attracted by family roots that had earlier inspired the work of my great-grandfather. Late one summer afternoon in 1971, I first felt filled with the light and the love of God when I accidentally walked into the chapel of Saint John’s Hospital in Lichfield. Over 40 years later, I return there regularly in quiet pilgrimage and humble homecoming.

I still feel spiritually moved ‘in place and time,’ as I imagine TS Eliot felt when he arrived at Nicholas Ferrar’s small church in Little Gidding:

… You are here to kneel …
Here, the intersection of the timeless moment
Is England and nowhere. Never and always. 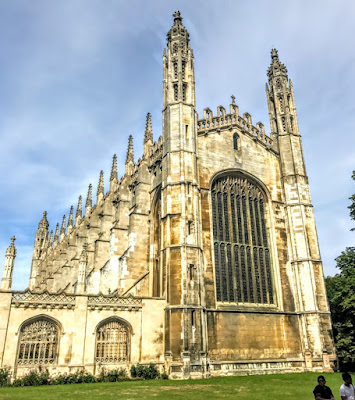 John Betjeman could express similar thoughts after finding himself in the chapel of King’s College, Cambridge:

And countless congregations as the generations pass
Join choir and great crowned organ case, in centuries of song
To praise eternity contained in Time and coloured glass.

When the slaves are freed from oppression in Egypt, they spend forty long years straying in the wilderness – a span of time that is greater than a generation – looking back to fleshpots of Egypt, yet looking forward to the Promised Land.

This promised land is to be symbolised not in a rural idyll but in the city (Isaiah 26: 1-2), and when the people are in exile in Babylon, their concern is for the destruction of the city of Jerusalem (Nehemiah 1: 3) and the first task is to rebuild and restore the city (Nehemiah 2: 11-20).

The writer of the Letter to the Hebrews describes the church (ekklesia) as coming ‘to Mount Zion and to the city of the living God, the heavenly Jerusalem’ (Hebrews 12: 22-23).

The description of England as a ‘green and pleasant land’ by William Blake in his poem ‘And did those feet in ancient time’ (best known today as ‘Jerusalem’) has become a trope to romantically describe an England that may never have existed but that we constantly year for and hanker after.

A ‘green and pleasant land’? 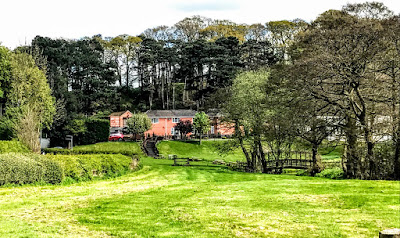 ‘Green and pleasant England’ in Wyatt’s Weeford is a sharp contrast with the dark mills Samuel Wyatt built in London (Photograph: Patrick Comerford, 2017)

Blake portrays this ‘green and pleasant land’ as the stark opposite to the city in industrialised England, typified by the ‘dark Satanic Mills.’ The inspiration for this image may have been provided by the Albion Flour Mills, the first major factory in London, designed by John Rennie (1761-1821) and Samuel Wyatt (1737-1807). The factory was built on land in Southwark bought by Wyatt, who was born in Weeford, outside Lichfield – a place that almost three centuries later is still part of the ‘green and pleasant land’ of rural Staffordshire and on the edges of major urban and industrial development.

From public schools to political party conferences, from the Last Night at the Proms to the London Olympics, Hubert Parry’s interpretation of Blake’s ‘Jerusalem’ has become England’s unofficial anthem. But Blake’s words are not harkening back to a place that was once rustic and outside Jerusalem, but looking forward in a visionary way to the New Jerusalem that can emerge in the city.

The theme of Blake’s hymn is linked to the image of the Second Coming, when Christ establishes a new heaven and a new earth in which the holy city, the New Jerusalem, symbolises the place of universal love and peace (see Revelation 3: 12 and 21: 2).

A recent Eurostat survey in 2016 found that only 12 per cent of people in Britain live in rural areas, the second lowest proportion in Europe, surpassed only by Malta (7 per cent. Despite the image of Ireland as country where the countryside is the ideal, green place, Slovenia (50 per cent), Lithuania (48 per cent) and Luxembourg (47 per cent) are the European countries with the highest proportion of people living in rural areas. More than one-third (35 per cent) of Ireland’s population lives in cities and almost a quarter of Irish people (23 per cent) live in towns and suburbs.

Culturally we often make an idyll of the countryside. In ‘East Coker,’ TS Eliot mourns the loss of the English countryside to urban expansion. John Betjeman, who famously said Slough was worth bombing, once referred to the suburban sprawls the spread across England before World War II as ‘red-brick rashes,’ and claimed the suburbs were ‘Bathed in the yellow vomit’ of sodium lamps. Yet in 1997 he spoke up for ‘a new beauty – the beauty of the despised, patronised suburb, the open heart of the nation.’

In the search for a sacred place that provide us with an identity that is rooted in place and spiritually nourishing, perhaps we should be comfortable about looking to urban and city places and not constantly yearning for the countryside of childhood holidays.

(Revd Canon Professor) Patrick Comerford is Priest-in-Charge, the Rathkeale and Kilnaughtin Group of Parishes, Precentor of Limerick, Killaloe and Clonfert Cathedrals, and a former lecturer in the Church of Ireland Theological Institute. This paper was first published in ‘Ruach’ No 4 (Michaelmas 2017), pp 50-56.

‘Ruach’ is a journal promoting spiritual growth and healing, edited by the Revd Dr Jason Philips, Parish Priest of Whittington, Weeford and Hints in the Diocese of Lichfield, and Ms Lynne Mills

A thoughtful piece, per usual.