Westward Ho! and an
Irish theologian’s plans
to visit the Kerry coast 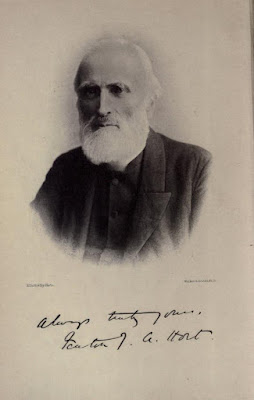 Recently I have been putting the finishing touches to a chapter on Fenton Hort for a book to be published next month.

Fenton Hort (1828-1892) was one of the three members of the ‘Cambridge Triumvirate,’ a group of Biblical scholars who worked tirelessly to produce a definitive version of the Greek New Testament that has influenced all subsequent English translations of the Bible.

The other two members of the Cambridge Triumvirate were BF Westcott and JB Lightfoot, but it is often forgotten that Hort was born in Dublin, grew up in Leopardstown, and had strong family connections in Dublin, Kildare and Kerry.

His close friends in Cambridge included the Christian socialists FD Maurice and Charles Kingsley, who strongly influenced his views on working class politics, the hymn writer John Ellerton, who was born to Irish parents and librarian Henry Bradshaw, whose father was from Milecross, Co Down. 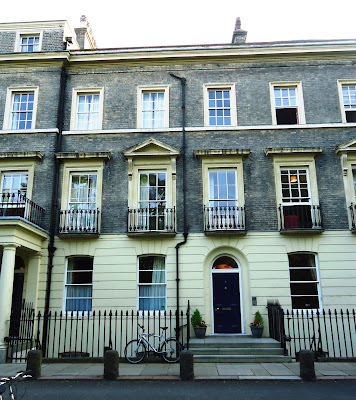 On my way into Limerick for last night’s debate in Saint Mary’s Cathedral, once again I passed Westward Ho!, the landmark pub in Mungret that sadly has been closed for some time and is now surrounded by fencing. Once again, I was reminded of Hort’s friend, Charles Kingsley, who was the author of Westward Ho! (1855), a novel that I found exciting as a schoolboy, although it had been published almost a century before I was born.

Hort and Kingsley were close friends and neighbours in Cambridge, and when Westward Ho! was about to be published Kingsley sent the printer’s proofs to Hort, perhaps seeking not just a second opinion but approval too.

Hort was particularly engaged by Chapter 5, with its descriptions of the Desmond rebellion in Limerick and Kerry, including references to Hort’s ancestors in the FitzMaurice family and the destruction of Carrigafoyle Castle.

Others would later accuse Kingsley of anti-Irish racism, in this book and in The Water Babies. But Hort could hardly suppress his excitement at this pre-publication reading, and wrote eagerly about the new book to his friend the bibliophile Henry Bradshaw (1831-1886), who had moved to Dublin the previous year and had been appointed a master at Saint Columba’s College, Rathfarnham (1854-1856).

Writing to Bradshaw in Rathfarnham from Cambridge in February 1855, Hort said he had ‘just been reading in the sheets of Kingsley’s Westward Ho!, a capital description of the attempt of the Spaniards to effect a lodgement in Munster in 1580, and have been so much interested by it that I daresay I shall some day make an effort to discover what your books may contain about it. Kingsley’s novel is the very thing to come out now, — judging by so much of it as I have read; and I think you will enjoy it thoroughly. The only fault I have to find with it is that he will not leave those poor Stuarts alone.’

Another of Hort’s close friends in Cambridge was the Revd Gerald Blunt (1827-1902), later Rector of Chelsea. In March 1855, Hort wrote to Blunt telling him he was reading ‘a large number of books.’ But the one he was most engrossed in was ‘Kingsley’s Westward Ho! which is published tomorrow.’

He could hardly restrain himself in his praise for the book, believing Kingsley ‘has quite surpassed himself; all his old energy and geniality, tempered with thorough self-restraint and real Christian wisdom. The suffering and anxiety he has endured now for some time have obviously much purified and chastened him, and rather increased than lessened his strength and elasticity.’

He was brimming in his praise for the book: ‘I hardly know a more wholesome book for anyone to read. Personally, I feel deeply indebted to it, though I suppose its lessons, like most others, will prove transitory enough. Don’t smile; but my first impulse, after reading it, was to wish myself chaplain of the Dauntless.’

However, despite his personal enjoyment of the book, Hort had his doubts. He told Blunt: ‘I ought to say that Westward Ho! will very possibly not be popular. Some will say that it is too like a book of travels; others, like a common novel, etc. etc. Its great fault is its dearness, so that I must wait for the cheap edition.’

Soon after these letters and the publication of Westward Ho!, Bradshaw returned to Cambridge to work in the library and as Dean of King’s College (1857-1858 and 1863-1865), and he was appointed the Cambridge University Librarian in 1867.

Many years later, in 1884, Blunt’s daughter Else married the Revd Joseph Newenham Hoare, a son of Archdeacon Edward Hoare (1802-1877) of Trinity Chapel, Limerick. At the time, Joseph Hoare was the curate of Holy Trinity Church, Muckross, a new church in Killarney, Co Kerry.

Hort was her godfather and when he visited Dublin four years later to accept an honorary doctorate in Trinity College Dublin, he was eager to visit Kerry and the Atlantic coast, perhaps because he was descended through Lady Elizabeth FitzMaurice, his great-grandmother, from the Earls of Kerry, perhaps because he wanted to visit Else Hoare in Killarney.

But the weather was inclement that June, and Hort never got out of Dublin beyond Glendalough and the Wicklow Mountains. Last night, as I returned through to Askeaton through Mungret, I wondered whether Hort’s planned journey to Killarney would have brought him out of Limerick on the same road, past Westward Ho!, and whether it would have brought back memories of his first reading of Kingsley’s swashbuckling novel, with its ‘capital description of the attempt of the Spaniards to effect a lodgement in Munster.’ 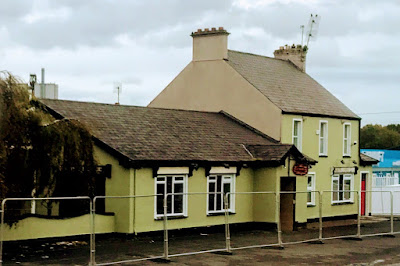 Fenced off because major renovation works are being held. Due to open again in November, thank goodness.