A few days in Galway
at a clergy conference 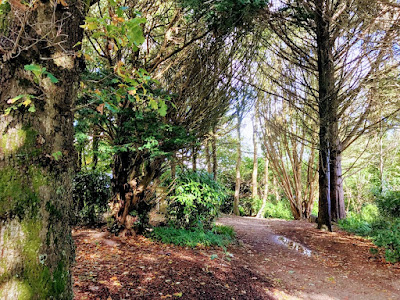 Walking through the wooded grounds and gardens of the Ardilaun Hotel in Galway (Photograph: Patrick Comerford, 2017)

Our conference is taking place in the Ardilaun Hotel in the Taylor’s Hill area of Galway, and our speaker this year is Bishop Gregory Cameron of St Asaph in the Church in Wales.

Ardilaun, or Glenarde House as it was then known, was built around 1840 as a townhouse for the Persse Family, who had large estates in south Galway. Many of the Persse family members hold a place in local history, including Burton Persee, a founder of the Galway Blazers, and Augusta Persee, who as Lady Gregory was a co-founder of the Abbey Theatre.

In 1922, Glenarde House was sold to Patrick Boland, a member of the Boland biscuit-making family. The Boland family lived at Glenarde until 1961, when the house and five acres surrounding it were bought by Patrick D Ryan and his wife.

The Ryan family soon began to convert the house into one a four-star hotel, at a time when the Salthill area was developing as a popular holiday resort.

When Ardilaun House opened as an hotel on Saint Patrick’s Day, 17 March 1962, the former Persse and Boland family mansion had been entirely redecorated and refurbished to include all the modern amenities, but care had been taken to preserve as much of the original character of the old house as possible.

There were 18 bedrooms, each with its own distinctive theme, which was considered modern at the time. It is a sign of how quickly standards were changing then that within 15 years all the original bedrooms had been phased because they were no longer adequate and had become unacceptable.

Since those early days, there have been many developments at the Ardilaun. The first wing with 14 guest bedrooms and six staff rooms was built in 1962. Another 34 bedrooms with additional kitchen and staff facilities were added in 1969, and in 1975 the bar was extended and the reception area was improved.

By 1977, there was an obvious need for further expansion, and in two developments an additional 40 bedrooms were added, all with bathrooms en-suite. A new dining room was also added with doors leading onto a patio where dining was possible outdoors in the summer months. The lands and woods surrounding the hotel were landscaped and have since provided pleasant woodland walks.

A major investment and upgrading of the hotel and its facilities was undertaken in 1999. A new leisure club was added, with an 18-metre deck level swimming pool, jacuzzi, sauna, steam room, gymnasium and aerobics studio. This redevelopment Included a health salon and renovations took place in the public and conference areas with the addition of a new meeting room and a boardroom. The hotel was then relaunched as the Ardilaun House Hotel, Conference Centre and Leisure Club.

The Ardilaun now had 89 bedrooms to include a number of suites. A further redevelopment completed in 2006 saw the addition of 36 luxury new rooms, two tiers of underground parking, garden suites, and extensions to the restaurant, bar, foyer and ballroom. At the same time, the grounds were fully landscaped.

The hotel was rebranded in 2007 as the Ardilaun Hotel, marking the hotel’s 45th Anniversary celebration. More recent developments include the redevelopment of Blazers Bar and Bistro and the transformation of more rooms.

The hotel has received awards as a wedding venue and many other accolades as a four-star hotel.

This morning I hope to go for a swim or for a walk in the grounds. This afternoon there may be time to get into Galway city.

Despite its modern appearance, the Ardilaun Hotel in Galway dates back to the 1840s (Photograph: Patrick Comerford, 2017)