Being and doing … are
there two ways of saying
yes, and of saying no? 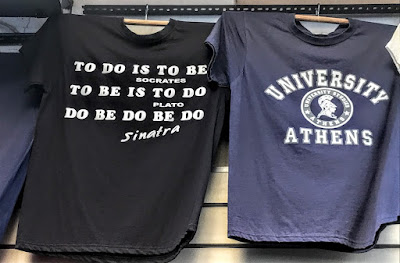 Being and doing: T-shirts on sale in the Plaka in Athens (Photograph: Patrick Comerford, 2017)

The 15th Sunday after Trinity.

It’s the sort of game we all play in our families at one time or another. I loved playing ‘Matching Pairs’ with my sons when they were at the early learning stage.

For adults, there are similar jokes about two kinds of people we compare or contrast:

‘There are two types of people: those who divide people into two categories, and those who don’t.’

For the mathematicians among us: ‘There are only 10 types of people in the world: those who understand binary, and those who don’t.’

And for those with a more subtle sense of humour: ‘There are two types of people in this world: Those who can extrapolate from incomplete data.’

This morning’s readings give us contrasting pairs:

In the Old Testament reading (Exodus 17: 1-7), we see contrasts between adults and children; water and wilderness; testing and thirsting; obeying and quarrelling; responsible freedom and slavery without responsibility.

This morning’s Psalm (Psalm 78) contrasts images of ancestors and children, day and night, rock and river, and so on.

In our Epistle reading (Philippians 2: 1-13), the Apostle Paul gives us the stark contrasts offered in Christ of slavery and freedom, deity and humanity, fear and trembling, heaven and earth.

This helps us to prepare for the matching pairs or clashing contrasts we find in our Gospel reading (Matthew 21: 23-32).

This reading is set in the immediate aftermath of Christ’s entry in triumph into Jerusalem on Palm Sunday and his cleansing of the Temple.

When he returns to the Temple the following day, he is confronted by the religious and civic leaders, the guardians of belief and tradition, who challenge and question him about his power and authority.

The ‘chief priests and the elders of the people’ are the leaders in the Temple hierarchy, and also at the apex of society in Jerusalem – questioning Jesus about what gives him authority. In particular, they ask what gives him the right to behave as he does, and especially the right to claim he is acting in God’s name when he is behaving like that.

It is a question that Christ might have expected, under the circumstances. The exchange takes place when he enters the Temple. The day before had been an eventful day: when Christ enters Jerusalem and the crowds hail him as king. He next goes into the Temple courts, he overturns the tables and the seats of the money changers and the dove sellers, and he speaks about the destruction of the Temple.

The Temple authorities have been offended. Quite naturally, they have to confront him.

Who does he think he is?

What gives him the right to force his way in and stir things up?

But, in a clever manoeuvre, Christ answers their questions by asking his own question.

A clever manoeuvre, indeed. It was acceptable then, but every bar room lawyer knows now that you are not allowed to ask questions that allow only a choice between two convicting answers, loaded questions like: ‘When did you stop beating your wife?’

Loaded questions are loaded with presuppositions, often with built-in fallacies and false dichotomies.

And the chief priests and the elders fall into a trap that every sixth-form debater would know how to set and how to escape.

There is a great deal of humour here. Those who are skilled in the Law failed to see the flawed legal trap. And in doing this they display their innate inabilities, their incomparable incompetence, their own failures in judgment. 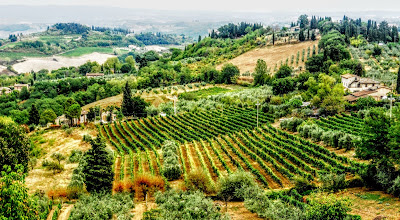 ‘Son, go and work in the vineyard today’ (Matthew 21: 28) ... vineyards on the slopes of the hills in Tuscany (Photograph: Patrick Comerford)

As they are left mulling this over, Christ tells the parable of two sons and a father. The second dichotomy, the second comparison, the second either/or choice, is posed when Christ tells this parable about a father who sends his two sons, a willing son and an unwilling son, to work in the family vineyard.

The two sons remind me of the T-shirt I have joked about for years and that eventually I bought this summer in the Plaka in Athens with these words: 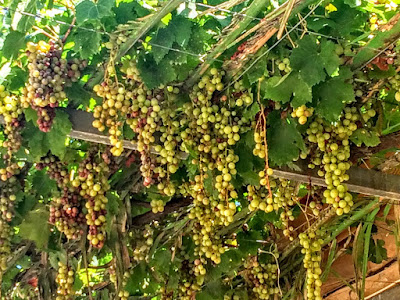 The other son says: ‘I go, sir.’ In public, he appears to be as a good son should be.

There are times when we may find it difficult to do what God is asking you to do. We wait, we think, we ponder, but eventually we answer that RSVP and seek to do God’s will.

And we encourage one another to do God’s will and we find that when we do God’s will, it is God’s will for us, when in the Church, as Saint Paul encourages us this morning, we are ‘of the same mind, having the same love, being in full accord and of one mind’ (Philippians 2: 2).

At work in the vineyard ... grapes ripening on the vines in the Hedgehog in Lichfield (Photograph: Patrick Comerford)

O Lord, Hear the prayers of your people who call upon you;
and grant that they may both perceive and know
what things they ought to do,
and also may have grace and power faithfully to fulfil them;
through Jesus Christ our Lord.

God of mercy, through our sharing in this holy sacrament
you make us one body in Christ.
Fashion us in his likeness here on earth,
that we may share his glorious company in heaven,
where he lives and reigns now and for ever.

(Revd Canon Professor) Patrick Comerford is Priest-in-Charge, the Rathkeale and Kilnaughtin Group of Parishes. This sermon was prepared for 1 October 2017.