The poet William Blake (1757-1827) described England over 200 years ago as a ‘green and pleasant land.’ When his poem was slightly altered by the composer Sir Hubert Parry, it became the unofficial anthem of England.

The poem, written as a tribute to John Milton, was inspired by a myth that Christ once travelled to England with Joseph of Arimathea, and that they had visited Glastonbury. This myth is reflected in the original title of Blake’s short poem, ‘And did those feet in ancient time.’ 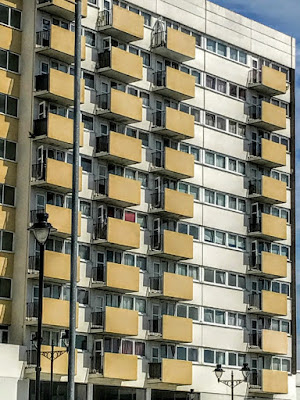 Are city tower blocks the image of the real England? (Photograph: Patrick Comerford, 2017)

But ever since Parry composed his setting in 1916, poem and song alike have been known as Jerusalem. It is sung at the Last Night at the Proms, at the close of political party conferences, in school assemblies and public schools, and at gatherings of the Woman’s Institute, so that it inspired the title of BBC sitcom Jam and Jerusalem.

It is sung at sports events and was sung at the London Olympics, accompanied by enthusiastic waving of the Flag of Saint George as the flag of England, and over the past century it has become the unofficial anthem of England.

The phrase ‘green and pleasant land’ instantly creates images in the mind’s eye of the English landscape described in the poetry of John Betjeman, or the England depicted by TS Eliot in ‘Burnt Norton,’ ‘East Coker’ and ‘Little Gidding.’ This now seems to be an England that many are yearning for today, though it probably never existed.

William Blake’s ‘green and pleasant land’ … a walk in the countryside in Comberford (Photograph: Patrick Comerford)

But Blake’s ‘green and pleasant land’ is contrasted sharply in his poem with an England that is being overrun by ‘dark Satanic Mills.’

It is not that Blake is yearning for a flight to the countryside from the cities of the Industrial Revolution. But looking at the Albion Flour Mills built in Southwark by John Rennie and Samuel Wyatt, he saw this tall new building as a symbol of the destruction of another era and of the oppression of the workers and their families.

Blake saw the new cotton mills and collieries of his time as a mechanism for the enslavement of the masses and the destruction of culture:

The words of the anthem are, paradoxically, an apocalyptic warning about a future England that is faced with choice between either embracing a more open way of life or of oppressing the masses.

Romance without being blind 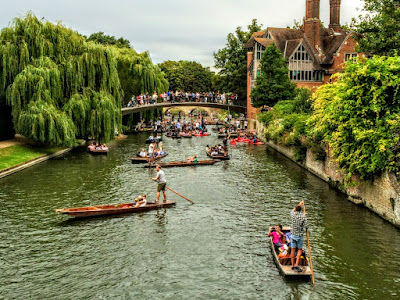 Weeping willows and punts on the backs in Cambridge (Photograph: Patrick Comerford)

Since my childhood and early teens, the concept of an England that is a ‘green and pleasant land’ a romantic image has been enjoyable and inspiring at one and the same time.

I look forward to my walks in the ‘green and pleasant’ countryside in parts of England that I have known and come to identify with over the decades. I have been lost and carefree on many a Sunday afternoon as I wander through fields and farms in south Staffordshire, East Anglia and the West Country.

But enjoying that romantic England has never blinded me to the reality of an England of factories and tower blocks, of over-crowded city streets and slums, in London or Birmingham, Bristol, Derby or Liverpool.

But never since the miners’ strikes and the CND protests in Thatcher’s England in the 1980s have I known England to be so deeply divided as England is today. The hopes and dreams of a more equal society that people like me cherished in the 1980s have evaporated and they have given way to the divisiveness and despair that prevails today. 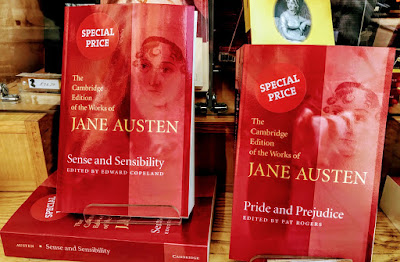 Was Jane Austen in Cambridge a comment on Brexit … 52 per cent Pride and Prejudice; 48 per cent Sense and Sensibility? (Photograph: Patrick Comerford, 2017)

I am not sure whether three events have changed the climate in England, or whether they merely illustrate change that has been coming about for years: the Brexit referendum last year, the general election this year, and the response to the horrors of the Grenfell Tower fire this summer.

The people who live in tower blocks were targeted in the referendum last year and in the election this year. They knew the Tories never had their interests at heart, they felt betrayed and abandoned by the Labour Party, and clever canvassing tipped the balance. But the first victims of Brexit are going to be the very people who were convinced to vote to leave, thinking it would reverse their misfortunes and remove their alienation.

In the middle of all the angst about Brexit this summer, during the parliamentary recess, there was a cultural diversion when England marked the 200th birthday of Jane Austen on 18 July 1817. It is interesting that a romantic writer is the only woman, apart from Queen Elizabeth, to feature on a Bank of England banknote since Elizabeth Fry was replaced by Winston Churchill on the £5 note.

In today’s broken and divided England, an airbrushed image of England’s favourite romantic writer has more appeal than a woman who campaigned for the rights of prisoners and against war and racism.

As part of the celebrations of Jane Austen’s bicentenary, the Cambridge University Press published a series of new editions of her works. Perhaps those who voted for ‘Brexit’ might consider her words in Northanger Abbey published 200 years ago in 1817:

‘Where people wish to attach, they should always be ignorant. To come with a well-informed mind, is to come with an inability of administering to the vanity of others, which a sensible person would always wish to avoid.’ 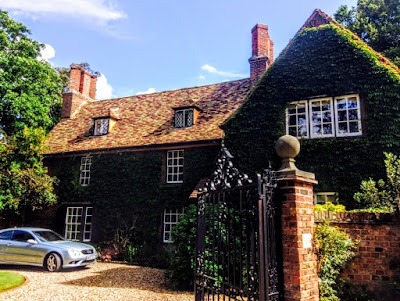 It is not too cruel to say that the way in which the cultured gives way to the crass is typified in the differences between the prose of Jane Austen written 200 years ago and the blockbusters by Jeffrey Archer, who today lives near Cambridge in Grantchester. 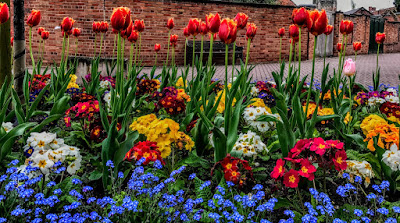 There is a constant mantra from the politicians who support Brexit that the people have voted and that there is no going back. But democracy would come to a sorry end if we were only ever allowed to have one election, never to vote again.

A cold and cynical slogan during the Brexit referendum was seen on the side of campaign buses: ‘We send the EU £350 million a week. Let’s fund our NHS instead. Vote Leave.’

Leading Brexiteers including Boris Johnson were photographed alongside the bus. But the pledge was dropped immediately when Teresa May succeeded David Cameron and moved into No 10 Downing Street. 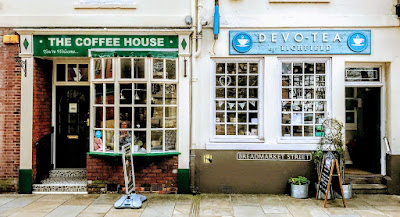 As the EU penalises Britain for leaving, as borders close, banks withdraw, factories close and skilled but fearful workers leave, the voters who were convinced into voting leave will find there is no extra £350 million, and there is no new inward investment to create new jobs.

On the other hand, wealth remains where it has always been. According to a report in Country Life, one-third of Britain’s land still belongs to the aristocracy, and the Guardian recently showed the staggering degree to which the landed aristocracy benefits from payments under the EU’s common agricultural policy.

At least one in five of Britain’s top 100 single-payment recipients in 2015-2016 was aristocratic: in one year, the Duke of Northumberland’s Percy Farms took £1,010,672, and the Duke of Westminster’s Grosvenor Farms estate £913,517. Chris Bryant estimates that once multiplied across the years, these EU payments have benefited the British aristocracy to the tune of many millions of pounds.

The hereditary peerage has consistently resisted democratic reform of House of Lords, and 92 hereditary peers still sit in Lords. The administration formed by Theresa May in June included one earl, one viscount and three hereditary barons. 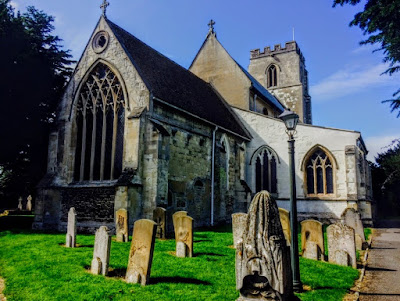 When Grenfell Tower burned down in the early morning on 14 June with over 80 deaths, it was just nine days short of the anniversary of the referendum. But it was surprising for the residents of Grenfell how Teresa May, other cabinet ministers and members of the royal family were slow in arriving on the spot to offer tea and sympathy.

Churches and other faith groups responded immediately with practical compassion. Cabinet ministers by their absence in those first 48 hours showed that today’s England is not so much ‘Strong and Stable’ as ‘Weak and Wilting.’ 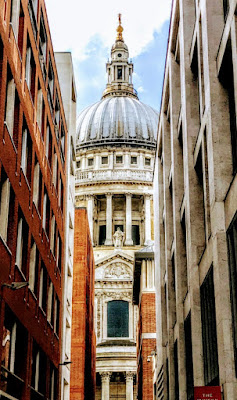 Is the Church providing a prophetic critique? … Saint Paul’s Cathedral in the City in London (Photograph: Patrick Comerford, 2017)

Is the Church providing a prophetic critique? Writing in the Financial Times in September, the Archbishop of Canterbury said capitalism in Britain is broken and needs urgent reform. Archbishop Justin Welby said Britain is failing children who ‘will grow up into a world where the gap between the richest and poorest parts of the country is significant and destabilising.’

The Jerusalem of Blake and Parry is inspired by the apocalyptic images of the second coming (Revelation 3: 12 and 21: 2), in which Christ establishes the New Jerusalem. Blake suggests that a visit by Christ could create a heaven in England that is in contrast to the ‘dark Satanic Mills’ of the Industrial Revolution.

The England that was part of my growing up was a welcoming and hospitable land, characterised by and symbolised in a romantic way by public footpaths that invited the city and town dweller to cross the wooden style and to walk out into the open green and yellow countryside.

Hospitality and welcome are as much part of the English spirit and psyche as they were part of the Irish self-image. Despite the xenophobia created by Brexit, I still imagine walking into country pubs with low wooden beams and warm fires in which I am instantly engaged in conversation and invited into the community. 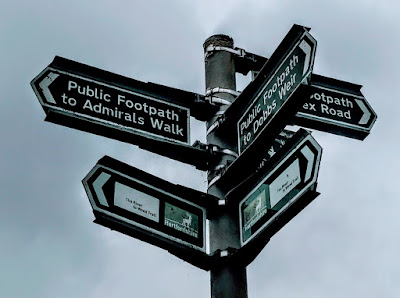 But the apocalyptic image that I fear may be unfolding in England today means the England of tea shops and timber-framed, river-side pubs with inglenooks is changing if not lost. Alongside them is the England of the ‘Wind in the Willows’ and Punting on the Backs in Cambridge, of tea in the Orchard in Grantchester and country churches with their churchyards, of thatched cottages and English country gardens. 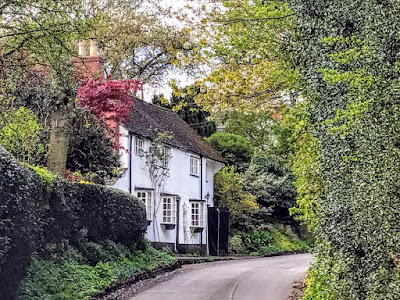 A walk along a country lane near Lichfield (Photograph: Patrick Comerford)

In this nightmare, the tower blocks are crumbling in ashes and the flag of Saint George is torn and tattered as it flutters alone against a grey sky.

But it is a nightmare, not a dream. England is divided today in a way I have not known for decades. But the English people I know keep my faith in the England that I know can be. 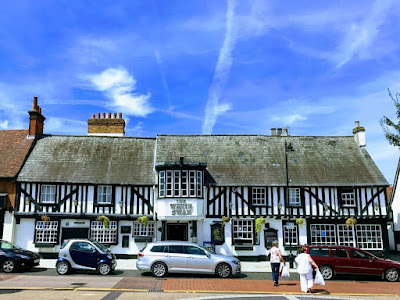 The world of the traditional, welcoming English pub is changing (Photograph: Patrick Comerford, 2017)

(Revd Canon Professor) Patrick Comerford is Priest-in-Charge, the Rathkeale and Kilnaughtin Group of Parishes. This feature was first published in the October 2017 editions of the ‘Church Review’ (Dublin and Glendalough) and the ‘Diocesan Magazine’ (Cashel, Ferns and Ossory) 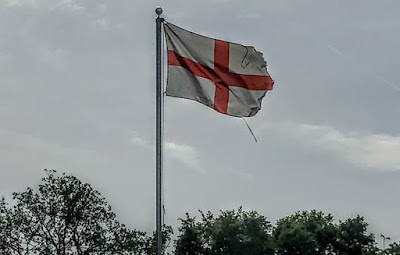 The flag of Saint George is torn and tattered as it flutters alone against a grey sky (Photograph: Patrick Comerfordm 2017)