Winter reflections on
the beach in Laytown
and Bettystown 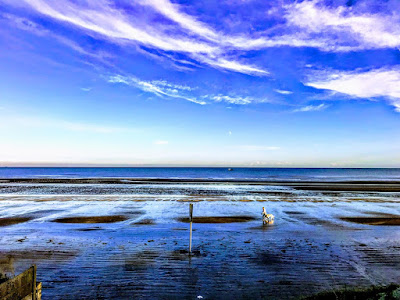 Looking across the dunes and the beach at Relish in Bettystown this afternoon (Photograph: Patrick Comerford, 2017; click on image for full-screen view)

It is almost a year since I moved to Askeaton. Since that move in January, I have got to know many beaches in West Limerick, North Kerry and in neighbouring Co Clare.

But I have missed my regular walks on the beaches close to Dublin.

Although harsh winter weather is threatening, the forecasts are for nothing like the heavy snows that are blanketing most of England these days. Instead, today was a bright winter day, and although the temperature fell to as low as 2, there was bright sunshine and clear blue skies.

I had gone for a walk by the harbour and the sea, along the East Pier in Dún Laoghaire, on Tuesday afternoon, and for a walk along the seafront in Bray, Co Wicklow, two weeks ago [14 December 2017].

So, today’s choice, during these few days off in Dublin, was between an afternoon walk on the beaches and by the harbour in Skerries, followed by coffee in Olive, or a walk along the beach in Laytown and Bettystown, on the ‘Gold Coast’ of east Co Meath, combined with lunch in Relish in Bettystown.

The ‘Gold Coast’ of Co Meath seen from the terrace at Relish in Berttystown this afternoon (Photograph: Patrick Comerford, 2017; click on image for full-screen view)

Two of us headed north, decided to continue on through Gormanston and Julianstown, and eventually plumped for Laytown and Bettystown, hoping the afternoon sun and the blue skies and seas would add to the beauty of a walk along the beach.

We parked in Laytown, the tide was out, and we walked the 2 km to Bettystown before having lunch in Relish.

It is a full year since I had been here, and it was good to be back. The menu has changed in the intervening 12 months, but the food is wonderful and despite it being a packed restaurant today we were given a table by one of the windows, with enviable views out over the sand dunes, across the long sandy beach, and out to the blue waters of the Irish Sea.

It was an idyllic scene through the window as we had lunch, and had the restaurant not been so busy we might have lingered a little longer this afternoon.

We walked back along the same 2 km stretch of beach, enjoying the dimming lights of dusk, and the patterns in the sky created behind the houses and the sand dunes by the setting sun.

This has been one of my favourite stretches of beach since my schooldays nearby in Gormanston and family holidays in Bettystown in the 1960s, and it was good to return to this beach this afternoon. 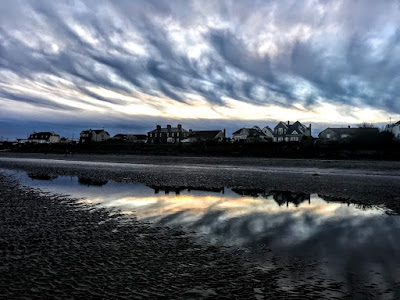 Reflections in Laytown at sunset this afternoon (Photograph: Patrick Comerford, 2017; click on image for full-screen view)

Posted by Patrick Comerford at 19:59