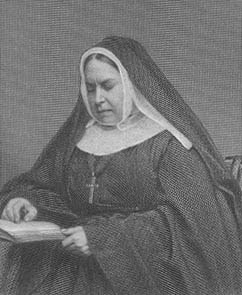 Harriet Monsell (1811-1883) is one of the few Irish-born women to be remembered in the Calendar of Saints in Common Worship in the Church of England. However, because her commemoration this week falls on the Tuesday in Holy Week, she is unlikely to be included in many commemorations today [26 March].

On 21 September 1839, Harriet married Charles Henry Monsell (1815-1850) while he was studying and receiving medical treatment at the University of Dublin. They moved to Oxford the following year. There, while he completed his studies, they came under the influence of the Oxford Movement. Charles was the third son of the Ven Thomas Bewley Monsell, Archdeacon of Derry, and after his ordination he became his father’s curate. Later, he became a canon of Saint Mary’s Cathedral, Limerick.

She died on the morning of 25 March 1883, which was both the Feast of the Annunciation and Easter Day that year. Because of this coincidence, her commemoration in the Calendar of the Church of England has been moved to 26 March.

A new Education Centre and home for the Sisters of Begbroke is being built at Ripon College Cuddesdon, near Oxford, and is to be known as Harriet Monsell House.

This new wing will provide a space for dialogue on the issues reflecting the challenges and opportunities of modern life, house the new projects and events arising from the success of our Research Centre, and enable the provision of better and deeper training for clergy at all levels. The plans also include a state-of-the-art lecture theatre.

The top two floors will provide a new home for the Sisters of Begbroke whose presence at the college “is eagerly awaited in order to complement our rhythm of prayer and help deepen our spiritual formation as a community.”

O God, your Son came among us to serve and not to be served,
and to give his life for the life of the world.
Lead us by his love
to serve all those whom the world offers no comfort and little help.
Through us give hope to the hopeless,
love to the unloved,
peace to the troubled,
and rest to the weary, through Jesus Christ, our Saviour and Lord,
who lives and reigns with you and the Holy Spirit,
one God, now and forever. Amen.


Picture reproduced by kind permission of the Mother Superior of the Community of St John the Baptist, Begbroke, Oxford. See: http://www.oxford.anglican.org/who-we-are/history-of-the-diocese/calendar-of-commemoration/mother-harriet-monsell/

Dear Patrick,
May I have your permission to republish an edited version of this piece, duly credited, in Newslink, the Diocesan Magazine of Limerick & Killaloe? It would have considerable local interest I think.
Every blessing to you for Easter,
Joc Sanders
Newslink Editor

That was absolutely fascinating! I had never heard of her, yet she was an outstanding and unusual figure in the Anglican church, Thank you,