Following the Stations
of the Cross in Lent 14:
Longford 12: Jesus
dies on the cross 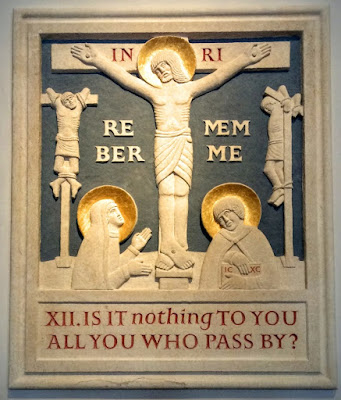 Station 12: Jesus dies on the cross

In Station XII in Saint Mel’s Cathedral, the Crucified Christ dies between the two thieves on either side. On the arms of the Cross is the acronym INRI, an abbreviation of the Latin version of the words written by Pilate, ‘Jesus of Nazareth, King of the Jews.’

Behind the scene are the words ‘Remember Me,’ recalling the cry of the Penitent Thief reported only in Saint Luke’s Gospel: ‘Jesus, remember me when you come into your kingdom’ (Luke 23: 42).

Despised. Rejected.
Eloi, Eloi, Lama sabachthani? My God, My God, Why have you forsaken me?
Jesus gave a loud cry and breathed his last.
From top to bottom the veil in the Temple is torn in two.

Tomorrow: Station 13: Jesus is taken down from the cross.