A unique Pugin-style
Gothic Revival house
comes on the market 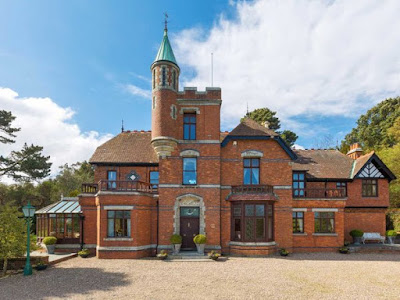 Saint George’s is an important Gothic-Revival Victorian house in Killiney designed by Pugin’s son-in-law and came on the market in recent weeks (Photograph: Knight Frank)

Saint George’s is, perhaps, the most impressive Gothic-Revival Victorian houses in Dublin and an important part of the story of Pugin’s architectural legacy in Ireland, and the house has come on the market in recent weeks.

Saint George’s, which gives its name to Saint George’s Avenue, Killiney, is close to both Killiney and Dalkey. This towered and gabled red-brick house, built in the late 1870s, was designed by AWN Pugin’s son-in-law, George Coppinger Ashlin (1837-1921), one of the leading Irish architects of the 19th century.

Ashlin built the house for his new wife, Mary Pugin, and in tribute to the legacy of her father, the Gothic Revival architect Augustus Welby Northmore Pugin. It is said he modelled Saint George’s on Mary’s childhood home, the Grange in Ramsgate, which was designed by her father. It took Ashlin several years to complete Saint George’s in the imposing styles of both the Gothic Revival and the Arts and Crafts movement.

The house is entered through solid double doors underneath the tower. The floor in the entrance lobby has encaustic ceramic tiles with rich patterns that are typical of the style favoured by the Gothic Revival. The hallway opens to the inner hall with the main stairway and doorways on each side leading to the drawing room and dining room. The ground floor also includes the kitchen/breakfast room, a utility room and the service wing. 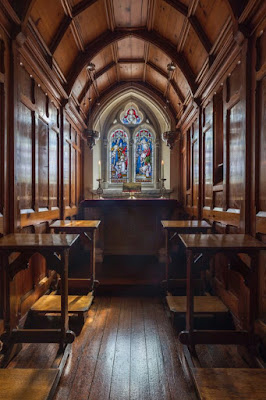 The private chapel in Saint George’s was added in thanksgiving for the birth of Miriam Francis Xavier Ashlin (Photograph: Knight Frank)

The timber staircase rising to the first floor has an oratory on the first return. This small chapel was added in thanksgiving when Mary Ashlin gave birth to their daughter, Miriam Francis Xavier, after 10 years of marriage.

There are five principal bedrooms on the first floor. From a central position on the landing, a secondary staircase leads up to the intimate, square tower room. A spiral stone staircase leads from the turret out onto the roof, with its breath-taking views across Dublin Bay. 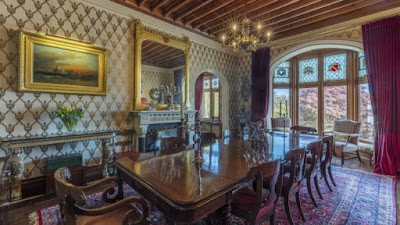 The house is bedecked with monograms and heraldic symbols representing the Ashlin and Pugin families. Almost every room in the house bears the initials of the occupants – on the fireplaces, in the delicate stained-glass windows, on the monogrammed brass handles on every door.

The original details in the house include the pine fireplace in the inner hall, the pitched pine staircase with Saint Brigid’s cross motif, Tudor archways, the twin ornate chimney pieces in the double-bayed drawing room and brass portiere rods holding back heavy drapes.

Other works that I have written about in the past include John’s Lane Church, Dublin, the Church of the Annunciation, Rathfarnham, Saint Kevin’s Church, Harrington Street, the Psychiatric Hospital in Portrane, Saint Maur’s Church, Rush, the former Presbyterian Church on Mallow Street, Limerick, the tower and spire of Saint John’s Cathedral, Limerick, and the Church of the Holy Cross or Daniel O’Connell Memorial Church, Cahersiveen, and Saint Joseph’s Church, Ballybunion, both in Co Kerry.

George Coppinger Ashlin was born at Carrigrenane House, Co Cork, on 28 May 1837, the third son of John Musson Ashlin, JP, of Rush Hill, Wandsworth, Surrey, and his wife Dorinda Coppinger, whose family was from Co Cork.

He was educated at the College of St Servais, Liège, and from 1851 to 1855 at Oscott College, near Birmingham, where he began preparing for a career in architecture.

Saint George’s is said to be modelled on Mary Pugin’s childhood home, the Grange in Ramsgate, designed by AWN Pugin (Photograph: Kinght Frank)

When Pugin took him into partnership, he gave him responsibility for setting up a Dublin branch of the practice and taking charge of the Irish commissions, which by then included the large new church of Saint Peter and Saint Paul in Cork.

By 1861, Ashlin had opened the Dublin office of Pugin and Ashlin at 90 St Stephen’s Green. Many of the commissions that followed quickly were for Roman Catholic churches, convents and monasteries throughout Ireland, including Saint Colman’s, the new cathedral in Queenstown (Cobh), Co Cork.

Ashlin married Edward Pugin’s younger sister, Mary Pugin (1844-1933) in 1867. Although the partnership of Pugin and Ashlin was dissolved in 1868, the family ties remained close, and Ashlin is said to have been in partnership with his brothers-in-law, Peter Paul Pugin and Cuthbert Pugin from 1875 to ca 1880. However, Ashlin now worked under his own name in Ireland, and continued his highly successful practice.

In 1903, Ashlin invited his former pupil and office manager, Thomas Aloysius Coleman (1865-1960), to join him in the new partnership of Ashlin and Coleman. He was a cousin of my great-uncle, Francis Coleman, who married my grandfather’s eldest sister, Mary Comerford, in 1889.

Other former pupils and assistants included Thomas Joseph Cullen (1879-1947), who lived in his later years at Sally Park, Firhouse, and Alfred Ignatius McGloughlin (1863-1939), a brother-in-law of Patrick Pearse, who supervised the Portrane Asylum project from 1895 before emigrating to the US. 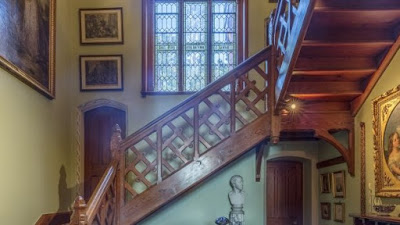 The stairs in Saint George’s … Ashlin took the train from Killiney to Westland Row each morning (Photograph: Knight Frank)

Ashlin has been described as having ‘a quiet and retiring disposition … with a certain inherent shyness.’ Alfred Edwin Jones, who became a pupil in Ashlin & Coleman’s office around 1911, described Ashlin as a tall, commanding figure with ‘an appearance of distinction.’ Each morning, he caught the train from Killiney to Westland Row and then walked to his office at 7 Dawson Street, where he would mount a waiting horse, canter up Dawson Street to Saint Stephen’s Green and ride several times round the park before starting the day’s work.

He was active role in the affairs of the architectural profession throughout his career and was President of the RIAI from 1902 to 1904. 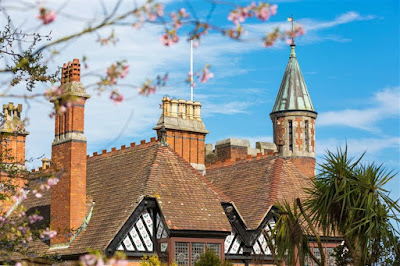 The current owners of Saint George’s, Dr Robert McQuillan and Dr Jane McQuillan, are only the fourth owners in the history of this house. They moved into St George’s almost 30 years ago, and they have embraced its significance as an exemplary Arts and Crafts home, painstakingly preserving and restoring every element of the original design.

Saint George’s is for sale through Knight Frank, with an asking price of €9.25 million. 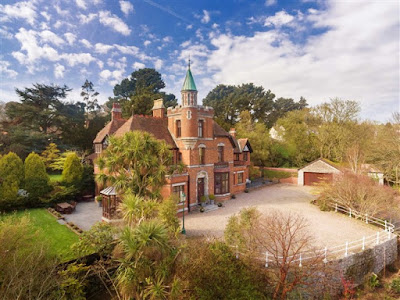