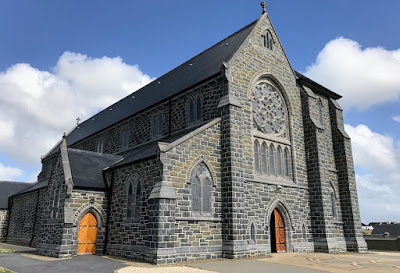 During my few hours in Ballybunion, Co Kerry, which is at the western end of this group of parishes, I visited Saint John’s Church on Church Road at the weekend. Some weeks earlier, I had visited Saint Augustine’s Church, the former Church of Ireland parish church which now serves the coastal resort town as a library. So, a visit to Saint John’s was appropriate late on Saturday afternoon [10 June 2017] after a walk on the beach and along the cliffs.

Saint John’s Church dates from an era that was strongly influenced by AWN Pugin and the Gothic Revival in church architecture. This one of only two churches from this school in Co Kerry, the other being Saint Mary’s Cathedral in Killarney, making it one of the architecturally important churches in Kerry.

The funds for building this neo-Gothic church were donated by Mrs Mary Young in memory of her husband, John Young. Mary Young (nee O’Malley) was born in Kilconly, Ballybunion. She met her husband John Young, a tea planter, while she was working in Kilkee, Co Clare.

The church was designed in 1892 by the Dublin-based architect George Coppinger Ashlin (1837-1921). Building began in 1894, but Mary Young died later that year before the church was completed, and she is buried with her husband in Kilehenny Cemetery. The first Mass in the church was celebrated on 6 August 1897, when Saint John’s was completed. 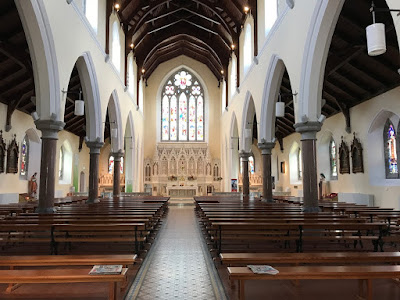 This is single-height and double-height Gothic Revival style church, with a seven-bay, double-height nave, and with seven-bay single-storey lean-to aisles to the north and south sides. There is a two-bay, single-storey sacristy projection to the north-east corner, a single-bay, two-stage engaged truncated tower to the south-west corner on a square plan, stepped buttresses and an entrance bay to west gable.

There are pitched slate roofs with lean-to slate roofs to the aisles, a clay ridge comb, gable parapets with ashlar copings, finials and springers, a cast-iron profiled gutter on an ashlar corbel table, and cast-iron hoppers and downpipes.

The church walls are built with rock-hewn squared limestone, with smooth ashlar dressings. The paired lancets to the side walls have limestone surrounds. 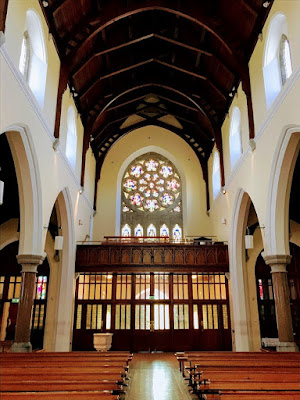 There are large tracery windows at the east and west ends. The west window incorporates a rose window of cinquefoils, and there is a west gallery. The pointed arches to the doorways have stepped reveals, hood mouldings and doors are timber ledged-and-braced double-leaf doors.

The pointed arcades to the aisles rest on polished pink granite and limestone columns. There are exposed scissor trusses to the nave.

The main altar and the side altars each have a reredos with carved pinnacles. There are tiled floors in the chancel and in the side chapels, and decorative tiling in the nave.

The architect who designed the church was AWN Pugin’s son-in-law, George Coppinger Ashlin, a son of John Musson Ashlin, of Rush Hill, Wandsworth, and his wife Dorinda Coppinger. He was born at Carrigrenane House, Co Cork, on 28 May 1837. He was educated at the College of St Servais, Liège, and Oscott College (1851-1855), near Birmingham, where he appears already to have started preparing for a career in architecture.

In 1856, Ashlin became a pupil of Pugin’s son, Edward Welby Pugin, first in Birmingham and then in London, and then studied at the Royal Academy (1858-1860). When he completed his articles, Ashlin was taken into partnership by Pugin, who gave him the responsibility of establishing a Dublin branch of the practice and taking charge of the Irish commissions. At the time, these Irish commissions included the new church of Saint Peter and Saint Paul in Cork.

By early 1861, Ashlin had opened the Dublin office of Pugin & Ashlin at 90 Saint Stephen’s Green. Many commissions followed, almost all of them for churches, convents and monasteries, including the new cathedral at Queenstown (Cobh), Co Cork, as well as the Portrane Hospital.

The partnership of Pugin & Ashlin was dissolved in 1868. A year earlier, in 1867, Ashlin had married Edward Pugin’s younger sister Mary Pugin (1844-1933). The family ties remained close, and Ashlin may have been in partnership with his brothers-in-law, Peter Paul Pugin and Cuthbert Pugin, around 1875-1880, although he worked under his own name in Ireland. 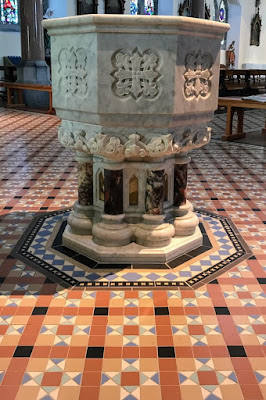 The octagonal baptismal font in Saint John’s Church was designed by Ashlin and Coleman in 1912 (Photograph: Patrick Comerford, 2017)

In 1903, his former pupil and office manager, Thomas Aloysius Coleman, a cousin of my great uncle, Francis Coleman (1854-1922), joined Ashlin in the new partnership of Ashlin & Coleman. His other pupils and assistants included Thomas Joseph Cullen (1879-1947), who lived in his later years at Sally Park, Firhouse.

The octagonal baptismal font in Saint John’s Church, Ballybunion, was designed by Ashlin and Coleman in 1912.

Ashlin was active in the architectural profession, and was a fellow (FRIAI, 1865), council member and president of the RIAI (1902-1904), a fellow of the RIBA (FRIBA, 1899), and a member of the Royal Hibernian Academy (RHA). He died, aged 84, on 10 December 1921, at Saint George’s, Killiney, the house he designed for himself, and was buried in Glasnevin Cemetery. 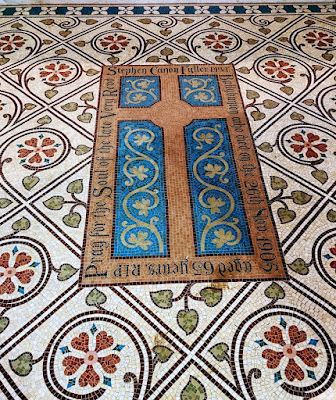 The mosaic sanctuary floor in Saint John’s is the work of Ludwig Oppenheimer of Manchester (Photograph: Patrick Comerford, 2017)

The mosaic sanctuary floor in Saint John’s dates from 1915 and is the work of the mosaic firm established in Manchester by Ludwig Oppenheimer. This partnership of mosaic artists, based in Old Trafford, had a close working relationship with Ashlin & Coleman and decorated many buildings, mainly churches, in Ireland from the 1890s to the 1960s.

The founder of the firm, Ludwig Oppenheimer, was born into an Orthodox Jewish merchant banking family in Brunswick, Germany, in 1830. He was sent to Manchester to improve his English. There he fell in love with Susan McCulloch, the niece of the Scottish couple he had his lodgings and converted to Christianity.

After he was disowned by his parents, he became an apprentice mosaicist in Venice. He returned to Manchester to marry Susan and to establish his mosaics business in the city in 1865. This family business continued in Manchester until 1965, when, it eventually closed, full century after its foundation.

Major renovations were carried out in Saint John’s Church in recent years, including the restoration of the stained-glass windows which had become buckled over the decades. 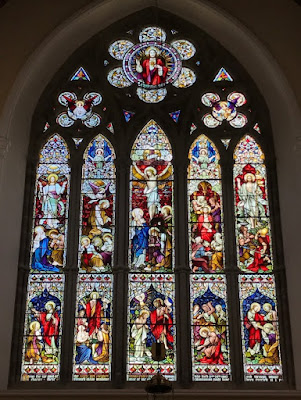 Bishop John Mangan (1904-1917) at St.Mary's Cathedral, Killarney appointed the firm of George Ashlin and Thomas Coleman, (who had designed Cobh Cathedral) to complete the work of Pugin and McCarthy in 1907. The nave and aisles were extended westwards by 8.2m to create two new bays; a new sacristy and mortuary were built; pinnacles were added to the flanking turrets at the west end, and a pinnacle at the east end to join one already there; the crossing piers were strengthened, and a great tower and spire, 86.8m high, were constructed above at a cost of £36,500. The work was completed and the cathedral finished in 1912.

St. John's Church in Ballybunion, financed by the generosity of Mrs Mary Young, provided the inspiration to Bishop John to finish St. Mary's. His relatives, the two Canon Fullers (see mosiac sanctuary floor photo) were among the priests responsible for appointing and directing Ashlin and Coleman. Some of the stained glass windows and the side altar were donated by the relatives of the Canon Fullers and Fr.John Shanahan nephew of Bishop John Mangan (buried in front of St. John's).

Thank you Patrick for this wonderful description of St. John's Church and the inspiring work of Ashlin and Coleman.
Eileen Stack Shanahan (great grandniece of Bishop John Mangan).

Very interesting thank you Patrick for doing this wonderful account of St.John’s Church and indeed the many other in the area around

Heard that one of the stained glass windows in the church are by Harry Clarke or by his students ?