Walking the long stretch of
beach at Banna Strand

In my sermons on Sunday morning, I had been talking about the number of grains of sand on the beaches of the world, and the number of stars to be seen in the sky. So it seemed only fitting to go for a walk on the beach on Sunday afternoon [3 June 2018].

After visiting Saint Brendan’s Cathedral, Ardfert, and lunch in Ardfert on Sunday afternoon, two of us went for a walk on Banna Strand, also known as Banna Beach, in Tralee Bay, about 12 km north-west of Tralee.

Banns Strand faces the Atlantic Ocean and stretches for miles from Ballyheigue Beach at Blackrock to the north to Barrow Beach to the south. Banna Beach is a beautiful Blue Flag beach with sand that extends for miles, making it a walker’s paradise. It was voted the No 1 beach in Ireland on Trip Advisor in 2017.

From the beach, there are views of the mountains of the Dingle Peninsula on the south-west horizon, Kerry Head and the Maulin Mountain to the north-west, and straight out in the sea I could see Mucklaghmore Rock. 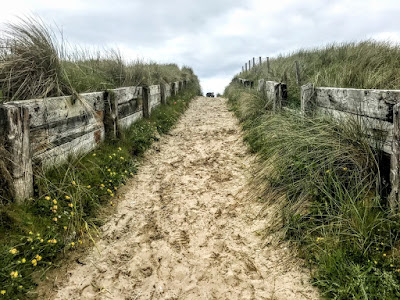 The sand dunes at Banna Strand can rise to heights of up to 12 metres (Photograph: Patrick Comerford, 2018)

The sand dunes here rise to heights of up to 12 metres (40 ft) and are a designated conservation area with rare plants and animals.

The beach is also a popular place for surfing spot, with surfing lessons and summer camps and surfboards and wet suits for hire.

Banna Beach Hotel closed in 2002 and has been replaced by the Banna Beach Leisure Centre. Dotted around the area are numerous holiday homes and mobile homes.

Banna Strand is also associated with Roger Casement, who was captured on 21 April 1916, having landed from a German U-Boat. Casement was involved in an attempt to land arms for Irish Republicans from the German vessel the Aud. 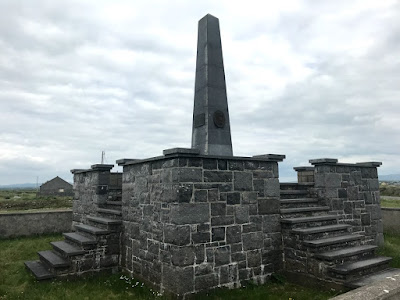 The Casement Monument near the dunes at Banna Beach (Photograph: Patrick Comerford, 2018)

A monument to Casement and Robert Monteith stands near the dunes with the inscription: ‘At a spot on Banna beach adjacent to here Roger Casement – Humanitarian & Irish revolutionary leader – Robert Monteith & a third man came ashore from a German submarine on Good Friday morning 21 April 1916 in furthering the cause of Irish freedom.’

The unnamed ‘third man’ was Daniel Julian Bailey, a soldier in the Royal Irish Rifles who was a Prisoner of War when he was recruited as Daniel Beverley into the ‘Casement Brigade.’

The monument was erected in 1966 to commemorate the 50th anniversary of the landing. The organising committee deliberately omitted the name of the ‘third man’ from the monument because he turned ‘King’s evidence’ after his arrest.

Both Casement and Beverley were captured, while Robert Monteith (1879-1956), from Kilcoole, Co Wicklow, spent the next six months hiding in Kerry, Limerick, and Cork, before travelling back to his family in New York.

When the monument was erected, the sod was turned by Robert Monteith’s daughter, Florrie Monteith Lynch. She was the author of a biography of her father, The Mystery Man of Banna Strand. 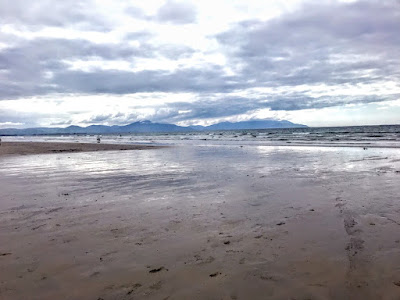 Walking along the long stretch of sand on Banna Beach (Photograph: Patrick Comerford, 2018)